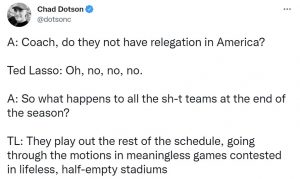 This is an exchange from Ted Lasso, and while the show is fictional, the situation is real, and it’s not at all spectacular. Although the context is European soccer, the AP’s Jeff Wallner points out that yeah, the peculiar form of American commitment to equality is some excessively excessive extra credit:

The worst feeling in the world, as an American, is for a British person to establish that they’ve out-competitioned us in anything but tea importation. Normally this type of realization sees me in a flurry of defensiveness, but there was no denying 1) the idiocy of this system 2) the utterly humiliating fact that I’ve just now fully realized what an idiotic system it is. So instead of “Shut up and get out of the way of my roaring Corvette driven by a wild horse and powered by a space shuttle engine,” my reaction to Jeff’s British friend was: Yeah. Why? Why do we do this?

I remember hearing baseball described as the most American of sports because it doesn’t matter how terrible your team is or how richly appointed the other team is– everybody gets three outs for nine innings. Period. Lovely, yes?

Worst of all, this silent incentive to blow chunks on the baselines doesn’t even work. The middling teams stay middling and the horror teams stay horrors unless the culture of the entire franchise changes or the Great Slot Machine of Free Agency somehow clicks into triple sevens. In European soccer, on the other hand, teams can fall out of their division if they don’t get their act together.

Drafting for amateur players in its current suck-first form was firmly in place by the time I was born, so for all of us born post- Watergate, this is the way it is because… that’s the way it is. It’s fair. Shouldn’t we be fair?

While the incredible luck of snaring a once-in-a-generation player might shift the fortunes of a football or basketball team, there aren’t a lot of examples of a single player making quite that much of a difference on the diamond. I am, after all, old enough to remember 700WLW’s “See You in the Series” commercials after Ken Griffey Jr. joined the Reds, and while the Junior we had wasn’t quite the Junior Seattle had, we all hoped that on some level that at least some of his Juniorness would rub off on the likes of Todd Walker and Elmer Dessens. Nope. As every single Mariners and Browns fan can tell you, for hours and hours, Fair just doesn’t work that way.

We don’t run our Olympics trials on this logic. By draft rules, my choppy inching around the Fountain Square Christmas rink should earn me top seed on the ladies’ singles figure skating roster. So why is it fine and okay for paying customers to simply accept all the Karl Marxing going on at the professional level?

It’s odd that the European practice is referred to as “relegation” when it in fact promotes competition and excellence. Ever-expanding wild card opportunities aside, pro sports is one of the few purely stats-based, feelings-free forces remaining in Western culture. You will never meet a more steely-eyed crew than a fanbase that has grown weary of watching relief pitchers spin around to watch the ball become a souvenir for whoever’s sitting in home run trajectory. On properly run teams, managers and front office folks are no less educated in what’s working and what’s not– and willing to act accordingly. Ask anyone desperately trying to claw his way out of A-ball.

The rest of us just play out the rest of the schedule in lifeless, half-empty stadiums, and we need to start asking why.