Happy Schrocktober everyone! The Cincinnati Reds (82-77) will begin their final series of the 2021 season tonight at 6:35 PM against the Pittsburgh Pirates (59-100). The Reds are coming off an ugly series at the White Sox, where the Reds were outscored 13-2 in the two game series. The Reds would like to finish their already winning season with a strong final weekend. 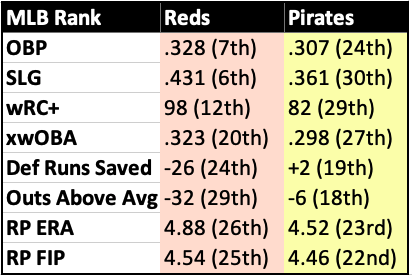 Luis Castillo will look to complete a strong finish to his 2021 season tonight. Castillo has a 2.77 ERA since June 1st, and his 3.2 fWAR over that span is the 11th best among all MLB pitchers. Castillo has a career 2.35 ERA in 11 starts against the Pirates, but a 4.95 ERA in 4 starts at PNC Park. Surprisingly, Castillo has not faced the Pirates since his second start of the season on April 7th. He shutout the Pirates over 7 innings, allowing just 4 hits, 1 walk and 5 strikeouts.

83 wins feels like a better season than 82 wins. 84 wins feels like a better season than 83 wins. 85 wins……well, you get the picture. Sure, the results of this series don’t mean anything really, but when you look back on this team, it would be nice to see this team more than one game over .500. It is also always nice to continue the domination of the Pirates. We will all be wishing for some baseball come January. So kick back, relax and enjoy the last weekend of the season. Go Reds!