The Cincinnati Reds (82-75) have won four straight games. The Reds are technically still alive in the playoff chance, although their elimination number is down to 1 with five games to play. One loss from the Reds or Cardinals win would officially end the Reds postseason hopes. The Reds will play a quick two games series at the Chicago White Sox (89-68) tonight at 8:10 PM. The White Sox have already clinched the AL Central division title. 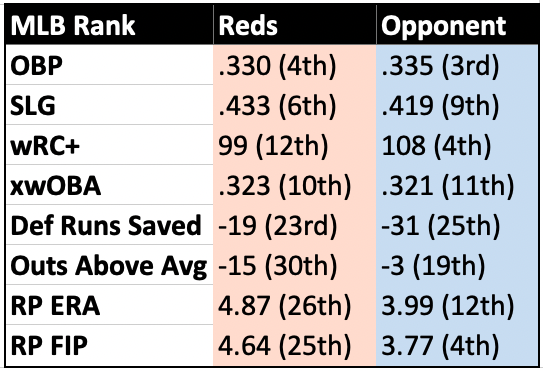 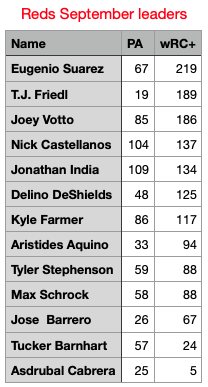 It has been really nice to see the Reds play well the past four days in a month that overall has been pretty brutal. The Reds really haven’t been as terrible as they have felt most of this month. The Reds as a team rank 3rd in the NL in OPS (.789) and 5th in runs scored (114) in the month of September. The Reds bullpen has a a 3.38 ERA in September (8th best in MLB) and 3.22 FIP (2nd best in MLB). Baseball can be a pretty cruel game. Miley and Gutierrez were really the only two weak links, but even still, the Reds have a run differential of +8 for the month. In fairness, the Reds did go 16-10 in July with a run differential of 0. They might have been due for some regression there.

This month is far more about the Cardinals than the Reds, as much as that pains me to say. If the Cardinals had gone 10-6 instead of 16-0, the Reds would currently have a half game lead. From the other perspective, even if the Reds would have had their best month of the season so far (15-9, .625) and 1 of the games against the Cardinals got flipped to a win in the process, the Reds would still be 0.5 games back. The Reds certainly did themselves no favors, and had they played better they’d still have a much better chance over the final days, but you have to give the stupid Cardinals most of the credit.

Anyways, hopefully the Reds can get a win tonight, the Cardinals will finally lose and the Reds can stay alive for at least one more day. Go Reds!