The Cincinnati Reds (78-73) season was already on life support and they were down 5-0 last night. The Reds fought back with nine unanswered runs against the Pittsburgh Pirates (56-94) for 9-5 win to stay within 3.0 games of the Cardinals and give themselves a punchers chance over the last 11 games. The Reds and Pirates are scheduled to meet again tonight at 6:40 PM, although there is a big threat of rain this evening (the radar starts looking particularly bad around 10:00 PM).

The Reds are virtually in must-win mode the rest of the season and all eyes will be in Milwaukee to see if the Brewers can finally slow the Cardinals down. The evil St. Louis ballclub has won 9 straight games, for the first time since 2004, at the absolute worst time of the season if you are a Reds fan. What goes up must come down, right?

Mahle overall is having a sensational season. Among NL SP he ranks 15th in fWAR (3.3) and 16th in ERA (3.59). I refuse to believe that he is destined to only be a successful road pitcher. In 2020, he had a 3.03 ERA in 32.2 IP at GABP. One positive sign this year at GABP is that his xFIP at home is 3.65. Mahle certainly needs to learn to pitch better at GABP, but I believe that he will also be better going forward just in general as some of his struggles are bad luck and strange split variance. If he does figure it out, he will be an All-Star caliber starting pitcher. 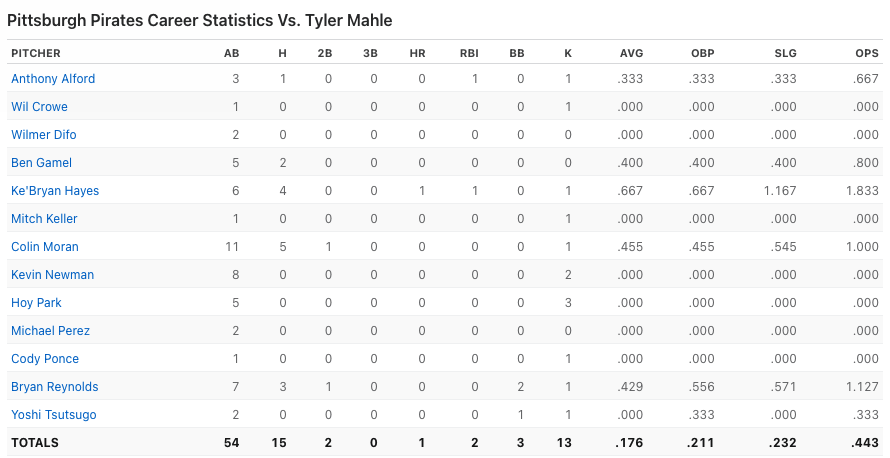 Mitch Keller is not a good pitcher (at least right now in his career). Out of all the pitchers in baseball with 80+ IP, his 6.14 ERA is the 7th worst (only 2 are still active). He has a 7.86 career ERA in 6 starts against the Reds (9.75 ERA in 3 starts at GABP). Hopefully the Reds offense really got going last night and can keep the party going. 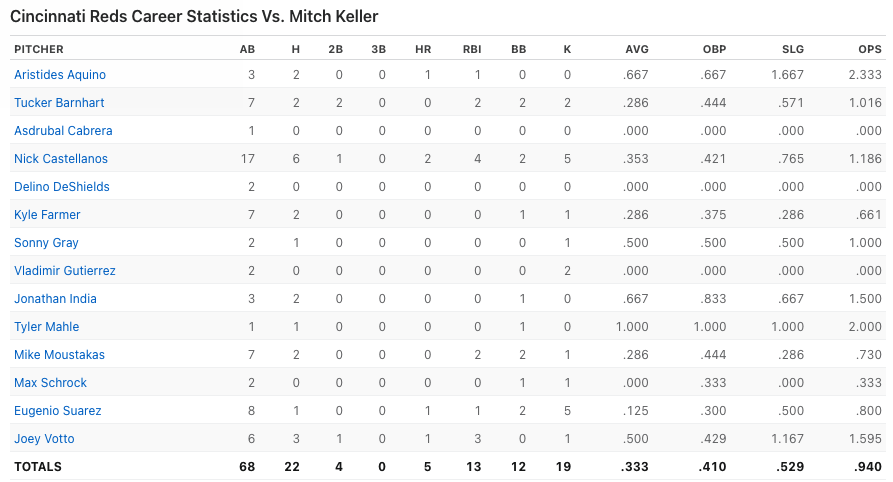 Eugenio Suarez makes his first start since August 8th against a RHP. Suarez has been tearing it up in September, and let’s just say Moustakas has not (as you see below). Despite not making a start vs a RHP since he became a platoon player essentially on August 9th, he has more PA vs RHP and better numbers: 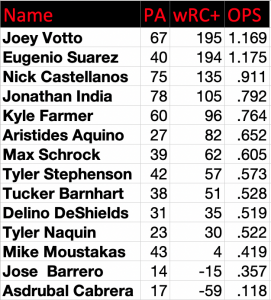 TJ Friedl also make his first career start. This is the first time the Reds have faced a RH SP since he homered off the bench on Sunday. You have to think if Friedl does well at all, he will start the rest of the games in CF vs RHP this season.

Two weeks ago today the Cardinals were projected to finish the season under .500. They have won 9 straight games and feel unstoppable right now – but there was a reason they had that projection just two weeks ago. It’s completely possible they get really cold, really quick.

The Cardinals best 22 game stretch this season (they’ve currently won 9 straight + 13 games left) prior to this one was 15-7. It’s not crazy to think they will start losing and have some struggles down the stretch. That of course doesn’t matter if the Reds don’t keep winning the majority of their remaining games. Hopefully the last two games (Reds scored 5 runs on really good Dodgers pitching on Sunday) has got the offense rolling and they can really beat up on some bad pitching. Go Reds!