The Cincinnati Reds have been playing poorly for nearly a month. Since completing a four game sweep of the Marlins on August 22, the Reds are 8-16. Despite the poor play, the Reds continued to have control or be just below the second wild card spot for weeks, but it caught up quickly with the Reds this past week. The Cardinals out of nowhere went 6-0 at the Mets and against the Padres to take a commanding 3.0 game lead on Cincinnati with two weeks left. 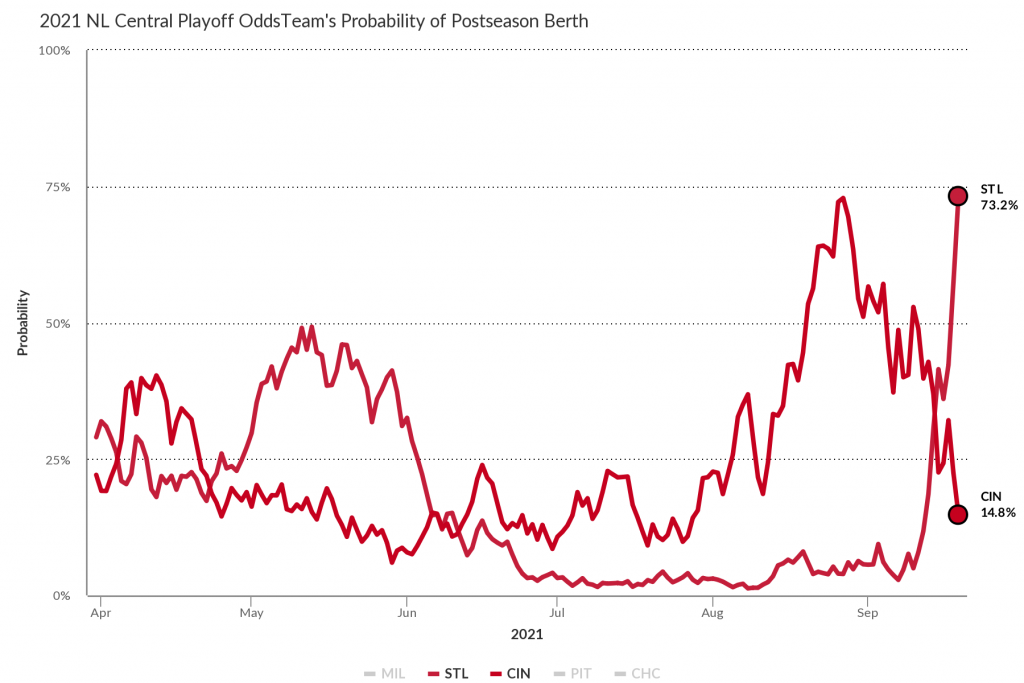 So how can the Reds salvage their season and make a run? The first part of the equation starts with Cincinnati. They obviously have to win, and win a lot. The Reds have 12 games remaining, but do still have the second easiest schedule in baseball. The favorable schedule has been an easy target to make fun of since the Reds have yet to capitalize on what has been a favorable schedule for weeks, but it’s still there. The offense has been their biggest downfall of late. However, if you could handpick two teams to play the rest of the season in the National League to hopefully get that offense going, it would be the Pirates and Nationals. The honest truth is that neither of those teams have a single starting pitcher that would be starting in the Reds rotation. Since the trade deadline, the Pirates SP have a 5.01 ERA (14th in NL) and the Nationals have a 4.80 ERA (12th in NL). The Reds are going to start each night with a significant advantage in 10 of their final 12 games.

How many wins do the Reds need to rack up? If you start with the cold hard numbers, Fangraphs predicts the Cardinals to finish now with 85.6 wins. The Cardinals play two more games than the Reds, so they are saying the Cardinals will finish 7-7. The Reds need to finish 9-3 to end the season tied with the Cardinals and force a Game 163 at Great American Ball Park on Monday, October 4. If the Reds got some help and the Cardinals lose 0.9 games less than projected, the Reds would need to go 8-4, which feels like a more reasonable task. They do still have two other teams (the Phillies and Padres a half game behind them), but it seems unlikely that if the Reds went 8-4 the rest of the way that one of those teams does better or the Phillies don’t pass the Braves in the process.

Can the Cardinals actually lose games down the stretch? When you are down to such a small sample like 14 games left, really anything is on the table. The Cardinals could ride their hot streak all the way to a disgusting fairy-tail ending. It’s more likely however that a team that has been fairly mediocre all year plays like that. St. Louis’ only other long win streak of the season came just over a month ago when they won six straight games from August 10-15. The Cardinals then proceed to lose 6 of their next 9 games. They are currently 12-6 in September. They do not have a month all season where they finished more than 4 games over .500.

We will probably know pretty quickly if the Reds still have a shot in this race or not. The Reds start a series with the Pirates tonight, while the Cardinals play at the Brewers. The first two pitching matchups for the Cardinals are Jake Woodford vs Freddy Peralta (NL All-Star) and Jon Lester vs Brandon Woodruff (NL All-Star). If the Reds somehow lose another game in the next two days, it’s probably a safe bet they won’t recover. But maybe things go the Reds way and we wake up Wednesday morning with the Reds just a game out.

This season for the Reds has featured several stretches where they bounced back in a big way after bad stretch:

There has been a lot of negative energy around the Reds over the last few weeks. It is understandable that many have lost their optimism and good vibes. For me personally, there have only been 6 seasons in the last 20 years where the Reds were anywhere even close to 3.0 back with 12 games to play. I hope that the next 20 years provide a lot more pennant chases, but history has taught me to cherish it while we have it. The Reds have fought back from so much this season. They gained 8.0 games on the Cardinals in 15 days from May 30-June 13. The Reds were 9.5 games behind the Padres on July 1st. Let’s see if the Reds have one more rollercoaster hill in their favor.