The Cincinnati Reds (76-71) season felt on the brink yesterday, but the Reds were able to survive in Pittsburgh for a 1-0 win against the Pirates. The Reds continue to hang around in the race for the second wild card spot with 15 games to play, despite having lost 7 consecutive series. The Reds will get a massive boost to their lineup as Jesse Winker is returning for the first time in over a month.

The Reds have the third easiest schedule remaining in baseball, but it certainly will not feel like it this weekend. The Reds will host three games against the juggernaut Los Angeles Dodgers (94-53) starting tonight at 7:10 PM. The Dodgers currently trail the Giants by 1.0 game for the NL West division lead.

The Dodgers will not be coasting to the finish as they want to avoid the wild card game that the Reds are just begging to get to. The Dodgers for essentially the first time all year are at full strength and their machine is rolling.  The Dodgers have won 6 straight games and they are 25-7 in their last 32 games. If you are looking for one tiny positive – the Dodgers only have a .700 team OPS over their last 30 games, which ranks 20th in MLB. The Reds will be lining up three good starting pitchers to hopefully keep that trend going, at least for a couple more days. 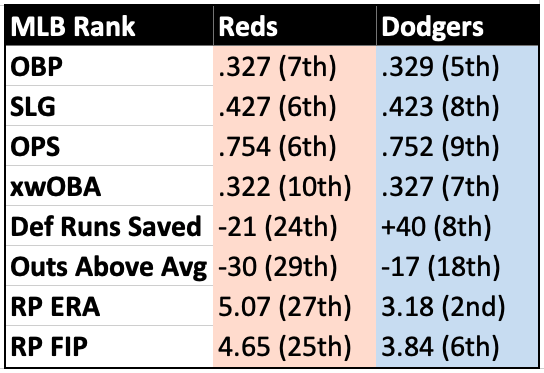 Programing note: tonight’s game is available on the MLB Network for those outside of the Cincinnati market.

The Reds are going to face a lot of good starting pitchers this weekend, but don’t sleep on just how good Luis Castillo has been. Since June 1st, Castillo’s 2.91 ERA is the 6th best in baseball. He has not faced the Dodgers since 2019, but does have a career 2.60 ERA in 3 starts. This is a big start for Castillo tonight and hopefully a successful audition for a potential wild-card matchup in 19 days.

The bad news: Walker Buehler has a 2.32 ERA this season has really only had two bad starts all year.

The good news: one of those bad starts was this month when he allowed 6 ER to the Giants, and the other bad start was when he allowed 5 ER runs against the Reds back in April. Jesse Winker could not have returned at a better time as he has 2 career home runs vs Walker.

The Reds are going with a…….bold defensive lineup. Jesse Winker will be in CF for the first time since 2019. Winker played 132.0 innings that year, the only time he has played in CF. He did not commit an error, but had -3 defensive runs saved.

The Dodgers lineup is stacked. The first six hitters in the Dodgers lineup all have a wRC+ of greater than 127. The Reds do get a bit of a break in the bottom of the order. Cody Bellinger (48 wRC+) and Gavin Lux (88 wRC+) are having very disappointing seasons for the Dodgers. All-Star Chris Taylor (118 wRC+) and AJ Pollack (132 wRC+) are both hurt. Pollack is on the IL and very unlikely to appear in the series. Taylor has missed 6 straight games dealing with neck soreness.

Tyler Naquin was placed on the IL as the move to bring Jesse Winker back. Naquin got hurt on Friday night in St. Louis when he collided with Jose Barrero. Naquin will not be eligible to return from the IL until Wednesday. It appears that his season could be in jeopardy with only 15 games left.

It’s unclear if Jesse Winker will be able to return to form this late in the season, but I don’t think we realize how important that he (and even Naquin to a lesser extent) is to the Reds offense.

Here is the weighted runs created from Opening Day until he went on the IL: 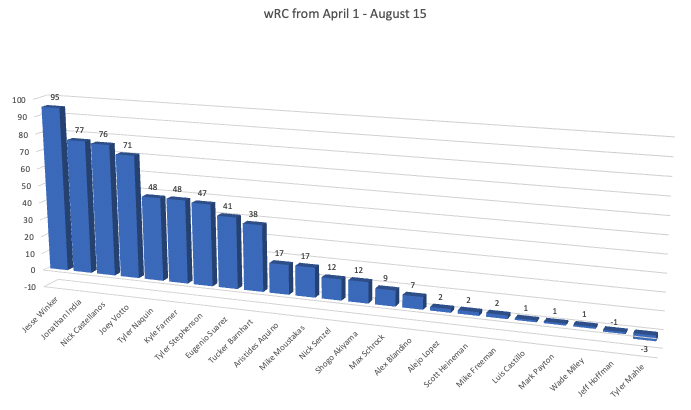 We talk (rightfully so) about the Reds struggles vs LHP, but a lot of that was masked because the Reds had the best offense in baseball vs RHP with Winker.

Anyone have a spare brick wall we can run through? pic.twitter.com/gTyYdCtGqj

This is how Jesse Winker showed up for the zoom.

He then spent the next 10 minutes basically telling us that he decided, "(Bleep) it, I'm going to play."

All of the Reds players on the field are wearing the same shirt right now.

“Us against the world.”

In case you can’t see, that’s a Reds flag planted on the globe. pic.twitter.com/TnOVnhoR5J

#Reds top prospect Hunter Greene has reached his innings limit and will not pitch again this season. He is healthy, the team says. Tim Adleman will start for Louisville on Saturday

If we are being completely honest, it does not feel like the Reds have much of a chance of winning this series. Most Reds fans would probably take just winning a game this weekend. The good/painful/exhilarating/deflating/heart-warming/heart-breaking thing about baseball is that we truly never know how any one game or series will go. The Dodgers are as complete of a team as I’ve ever seen in my lifetime watching baseball. That does not mean that it’s impossible for Luis Castillo, Sonny Gray and Wade Miley to just have great starts this weekend. We have seen each of those guys completely dominate at times this season.

The Reds offense has been limping of late, but we have seen them breakout of slumps out of nowhere and hit some really good pitchers. It would truly be the most Cincinnati sports thing to end a 7-game series losing streak to the most talented team in baseball. Go Reds!