The Cincinnati Reds (72-63) are down to 27 games remaining in the baseball season as they cling to 0.5 game lead for the final playoff spot in the National League. The Reds will begin a three game series with the Detroit Tigers (63-72) at GABP tonight at 7:10 PM. 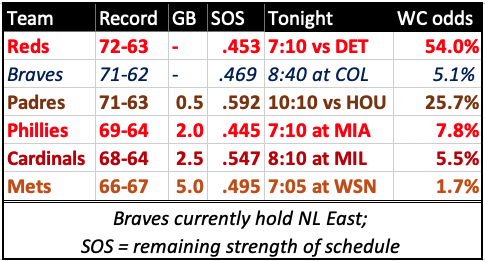 The Tigers might have the exact opposite record as the Reds and be 9-games below .500, but make no mistake about it – this will be one of the most difficult series remaining on the calendar for the Reds. The Tigers are 23-21 in the second half despite some recent struggles. The Tigers are 5-11 in their last 16 games. Many of those recent struggles were due to a slumping offense, but they’ve scored 14 runs in the last two games. The three SP the Reds will face this weekend have an ERA as a starter of 4.00, 3.50 and 3.59. 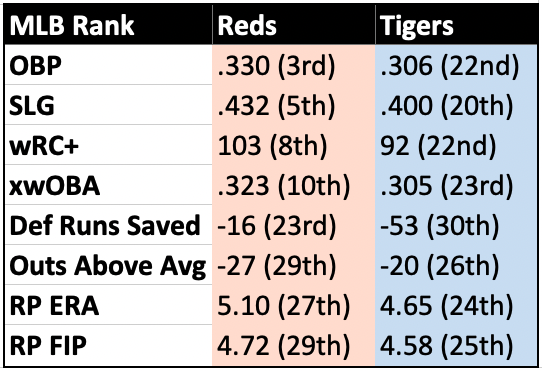 Vladimir Gutierrez was rolling before his last start in Miami. He only lasted 3 innings allowing 5 runs (some bad luck sprinkled in there), but prior to that was dominating. Gutierrez had a 1.67 ERA/2.70 FIP in his first 5 starts in August. He was also missing more bats with an 8.63 K/9 rate. This will be his first career appearance against the Tigers.

There is nothing that scares Reds fans more than a mediocre soft-tossing lefty. Reds fans will get just that with Tyler Alexander tonight. You might remember Alexander as the guy who tied an AL record when he struck out 9 straight Reds batters in relief last year – in game the Reds actually still won. He started this year in the Tigers bullpen. He made one spot start earlier in the season, but got moved to the rotation full time on July 17th. He has been more successful as a SP (4.00 ERA), but typically does not go very deep in the game. His starts have been 3.1, 3.2, 4.0, 4.0, 5.1, 5.0, 7.0 and 2.2.

The Tigers overall offensive numbers don’t look great (they are really lacking that one or two great hitters), but they have a lineup full of solid hitters. Akil Baddoo has a 114 wRC+ and 14 SB. Jonathan Schoop has a 104 wRC+ and 18 HR. Robbie Grossman has a 114 wRC+, 20 HR and 15 SB. Jeimer Candelario batting 5th is probably their best overall player, and he has a 115 wRC+ and a .351 OBP. Miguel Cabrera got off to a miserable start to the season, but he has been really good over last 60 games: .292/.353/.472 with a 123 wRC+. The Tigers also have a catcher, Eric Hasse with 19 HR in less than 300 PA this season on the bench tonight. One thing of note is that with the Tigers not having a DH this weekend, Cabrera get shifted from usually being the DH to 1B and Schoop from 1B to 2B.

The Reds are going with the same lineup that scored 12 runs in their last game. The Reds could really use guys like Suarez, Aquino and DeShields to step up and hit LHP.

The Cincinnati #Reds could send Jesse Winker on a rehab assignment to Triple-A at some point next weekhttps://t.co/PMCYxqIbSr

It is with great regret that I will not be able to attend this year’s Baseball Hall of Fame induction after testing positive for COVID. Fortunately, I have been vaccinated, otherwise doctor said I would be hospitalized.

I thought back earlier today to just how many times in my Reds fandom that I would have done anything for the Reds to be in a playoff race into September. This team is certainly not perfect and has flaws, but just how fun as that team been to watch all season? Sit back, relax and enjoy as the Reds make this playoff push. Go Reds!