“I want to go in the stadium,” said my nephew. We were standing on the campus of the University of Florida. Now my direct experience with stadiums– Notre Dame, Great American Ballpark, Riverbend, Riverfront, Ohio– strongly suggested that one simply does not just walk in. In fact, it’s a good way to get kicked out of them. In fact, I’d experienced exactly this. And the 17-year-old at my left hand did not need to know that part of it, but it did not seem the best introduction to his dream school.

So now I was left to apply my bitter experience of angering ushers without letting on how I came by this highly valuable knowledge. “Why don’t I just take your picture outside of it,” I suggested. When threatened, we introverts are world-beaters at invisibly standing outside of, next to, and right up on people, places, and things. This defaults seemed the safest tactic at the moment.

“But,” he said, citing TikTok as an authority, “I’ve seen it. You can just walk in.”

Well, perhaps this was a quick and easy way to save his parents an application fee and forty grand a year. We approached the looming concrete, saw no gates at the entrance ramps, and, indeed… walked in. 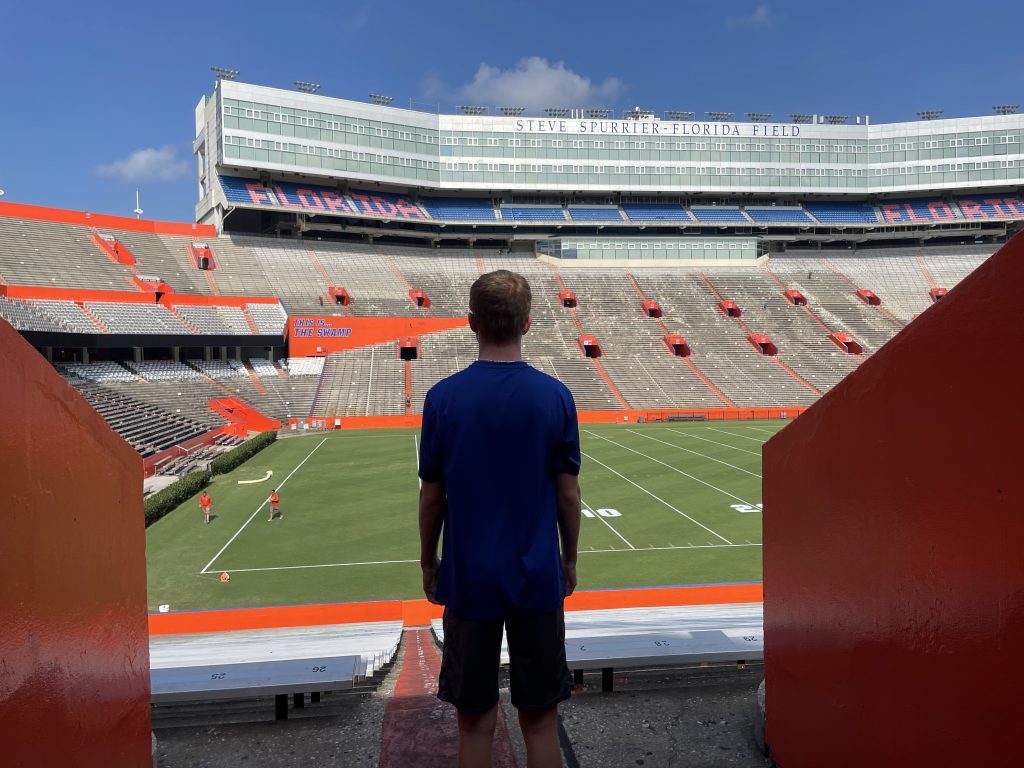 The place was hideous, of course, with gooey orange paint slathered floor to rooftop, but I let the boy have his Moment. My Moment, the first time I entered Great American Ball Park, was shared with an opposition fan (guess which team) who bumped my shoulder and screamed something in beer-ese, and because it was a bobblehead night I had to keep walking or die.

Florida’s sickening July humidity pushing down every limb, I was continually glancing over my sweaty shoulder until I noticed not just stadium employees, but the people.

Guy on his phone sitting in the middle of a row of the student section.

An exercise class of five sprawled on yoga mats beneath a ticket entrance.

A dad and his little girl taking a selfie by the field.

Best of all was a man wearing full firefighter gear, jogging the concourse; would that the concession stands weren’t shuttered so that I could buy him one of everything.

A Famous Place on TV had simply…. flung open its gates to the bobbing jetsam of the community, all of whom were going about their sweaty day. No one seemed awed except us. If people wanted to exercise by inhaling straight water-air for an hour, they were more than welcome to go at it. Bathrooms were open. Drinking fountains were running. The grey walls were graffiti-free, and an air-conditioned gift shop hawked logo dog leashes and Gatorade.

It was weird, this– the business of standing in a stadium to which I had zero emotional attachment and no grim expectation of encroaching on enemy turf. But the hour we spent wandering the empty seats made me attached.

My experience with GABP security was that of a system so (understandably) tight that the directionally impaired Brayan Pena met nearly every member of the Hall of Fame staff during his tenure as a Red. He kept forgetting how to get into the stadium, so he’d cheerfully apply for assistance at our front desk and we’d swipe him in, pointing the way to the clubhouse. And the first glimpse I had of the interior of Notre Dame Stadium was standing on my tiptoes on the other side of a vast, vast parking lot. The implications were sternly, inarguably clear.

But UF?  Come conduct your 10 AM Zoom call at The Swamp!

Imagine a policy like this at Great American. We can already peer into the stadium from the crests of various city streets, anyway– a visual invitation to gaze upon this jewel of the riverfront. What if we didn’t lock the gem away for the majority of the year?

Yes, darling: 2PM Silver Sneakers Jazzercise along Beer Alley and enjoying a very, very private cup of coffee on the Sun Deck on a surprise warmish Thursday in February. All the square dance classes. All the impromptu plastic-pin bowling matches. All the Rollerblading!

All in a place holy to baseball, but to those of us who live here, the cathedral would function as just another part of the house. Inspiring, encouraging, and right down the street. Hey, come see my ball park. It’s open.

A baseball park is a special occasion kind of place for most of us. But does it have to be that way? What if you didn’t have a tour or a wedding or a charity event and just… wanted to hang out at your friendly local ball park? Just a few minutes. Maybe get some steps in. Take a friend. Take a solo seat and think about hitting one out– or nothing at all.

You could just walk in.