Some baseball games are written in what the crowd never sees. The sports channel director chose another camera for the broadcast feed; the crowd is far too far removed to see the eye flick of the pitcher or the split second in which the shortstop is two steps out of position. In non-decisive plays and in the general churn of the season, such moments, if they are seen at all, become quickly forgotten or smoothed over. We don’t think about it again until there’s someone on base and we’re not out of slam range and oh no here comes the bullpen.  But day by day, a season can slowly begin to hinge on what players see– and when.

My own career, although 90% insight and 10% noting when a professional signmaker has used “you’re” incorrectly, rarely involves such moments of sighting down, but sometimes the tools of the trade remind me.

I’m tough on laptops. Always have been. They are swept aside as hot tea cascades menacingly down the desk, tossed into backseats, shoved through TSA scanners. My most recent iteration lasted a whole two years before beginning to wheeze pitifully as I attempted to execute such arduous tasks as going on the Internet. Its redshirt replacement arrived this week, and enjoyed a full ten minutes of peaceful booting before I set it to downloading three hundred thousand files worth of articles, writing samples, and pictures of Baby Yoda.

But first NewLaptop and I exchanged the usual electronic preliminaries (“Hello! Which time zone are you in?” “Hello! None of your freaking business, Bill Gates!”) and settled in to create highly mediocre sentences together. While it tended to the perfectly reasonable task of making instantly accessible the essay I wrote about figure skating costumes in 1993, I stepped away to do such Artistic Professional Writerly Things as cram dinosaur-shaped chicken nuggets in my face.

When the digesting dinosaurs and I returned, the screen of the laptop was dark as it considered what I had to say, as a suburban raised high school junior, about all the ways Sun Tzu had no idea what he was talking about. And as I approached it… woke up. It woke up. It woke up without me touching it.

Maybe I’d accidentally jostled the mouse? Maybe the webcam cover wasn’t fully in place. But no, this happened several more times, even as I attempted a stealth approach and also surprising New Laptop by leaping up at it from under the chair (such rigorous scientific inquiry may or may not be a contributing factor into why I’m constantly submitting at deadline, editors, now that I think of it.) I was gratified NewLaptop was so happy to see me, but as a person who watches Dateline, I wanted no part of this.

Finally, concerned that NewLaptop was overly clingy and needed some friends its own age, I asked DuckDuckGo what was going on, then realized the manual might also have something to say about this.

What was going on was “Human Presence Detection,” meaning that NewLaptop was equipped with an 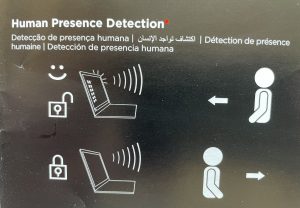 infrared camera and probably also whatever rides along in stealth bombers. This was not something I

But it’s okay, see? There’s a smiley face by the computer! This is a happy moment! Like a pitcher picking off the guy who bunted over, or the New World Order capturing all the data you’ve ever generated!

NewLaptop, it seems, is also extremely concerned about my health. It can yell at me about my posture, if I ask, or, since we’re fast becoming a dead-inside glob of former humanity drifting about in our self-created electronic bubbles, remind me to look outside at a tree every twenty minutes. 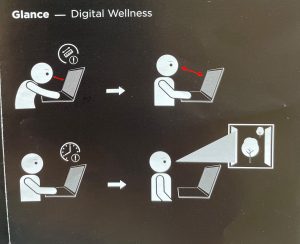 This is why the world needs sports in general and baseball in particular. And we need it clean, unburdened by what nefarious interests want to hang on it, as has been the case since the first rock was bashed by the first tree branch.

We need the slowed-down pace of the shortstop wandering the baseline, the batter adjusting the gloves, the catcher dragging a foot near the plate. For these ticks are rarely ticks, but the outgrowth of thinking: “Give me a second here. I need to process all this.” The fact that pitches must see in four directions at once while also deciding precisely how to hurl a small sphere 60.5 feet at a hundred miles an hour is what makes them such valuable Topps card stars.

The ways the big leaguers see is not our way of seeing–the ball, the mound, the fence. Their form of human presence detection filters through some cowhide and a bit of cork. But for that, sometimes we’re a bit more inspired to get up, go outside, and appreciate a tree or two.