Two of the hottest teams in baseball will square off for the first of three games tonight at Truist Park in Atlanta at 7:20 PM. The Cincinnati Reds (61-52) are 10-3 in their last 13 games, and they have played .619 baseball since May 30th with a 39-24 record. The Atlanta Braves (57-55) have won 5 of 6 to revive a season that was put on life support. They are just 2.0 games back now in the NL East, a division the Reds would be leading by a game and half if they were in it. 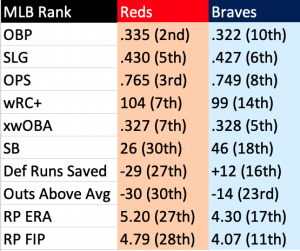 The Braves look completely different than when the Reds saw them earlier in the year. They lost Ronald Acuna Jr. for the season back on June 10th. The Braves went crazy at the deadline acquiring Eddie Rosario (OF), Richard Rodriguez (RP), Jorge Soler (OF), Adam Duvall (OF), Stephen Vogt (C) and Joc Peterson (OF). None of those moves will come close to replacing Acuna, but they are helping to keep the Braves 2021 hopes alive in a weak division. Soler and Duvall have already hit a combined 5 HR in 9 games for the Braves since they were acquired.

Sonny Gray is coming off back to back good starts. He dominated the Mets in Queens (6.0 IP, 5 H, 1 R, 7 K, 1 BB). He had some tough luck against the Pirates, but in 5 innings only allowed 2 hard hit balls with 7 strikeouts and 2 walks. Gray’s overall ERA is very misleading. You can see by the xERA and FIP that he has been a much better pitcher. Gray’s season ERA was at 3.19 in mid-June before two bad starts ballooned it to 4.50.

Drew Smyly turned 5 good starts in 2020 into $11 million to pitch this season for the Braves. The Braves have got a below average pitcher in return. He has not allowed more than 3 ER in any start since May, but he rarely pitches deep into games. His last 3 starts were all just 4.0 innings. Unfortunately for the Reds, one of Smyly’s best starts of the year came against the Reds back on 6/25: 6.0 IP, 3 H 6 H, 1 R, 0 BB, 3 K.

The Reds enter play just 25th in baseball with a .710 OPS against LHP. It is clearly the weakness of the Reds offense. That being said, they have several players that have hit really well against LHP: Jonathan India (.946 OPS), Kyle Farmer (.936 OPS), Tyler Stephenson (.902 OPS), Nick Castellanos (.887 OPS) and Aristides Aquino (.898 OPS).

This is a big week for the Reds after suffering a tough loss yesterday in a favorable pitching matchup. The schedule looks very good for the Reds the remainder of the season after this week. This is the week just to survive. Go Reds.