It was a wild day around baseball with the trade deadline. The Cincinnati Reds (54-49) remained quiet today, banking on their moves from earlier this week. The Reds enter play on Friday with the best record in the National League at 15-9 in the month of July. They will start a series with the NL East leading New York Mets (54-47) in Queens, NY tonight at 7:10 PM. The Mets earlier today acquired the Reds nemesis, Javy Baez. He will fill in for Fransisco Lindor at SS, and then slide over the 2B when he returns. The Mets are 13-12 in the month of July. 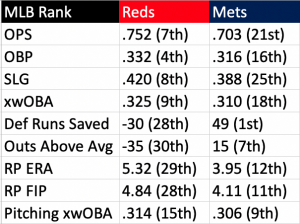 Sonny Gray is coming off two really rough starts. Gray’s ERA has ballooned from 3.19 to 4.50 after allowing 5 ER to the Brewers in 4.2 innings and 8 ER to the Cardinals in 3.1 innings. The positive is that both of those starts came at GABP. Gray has a 3.33 ERA in 5 road starts this year. Even better than just a normal road start for Gray is that Citi Field allows the 4th fewest home runs of any ballpark this season. That has really been his biggest issue this season. Gray has a career 3.18 ERA in 2 starts against the Mets.

Carlos Carrasco will make his New York Mets debut tonight. Carrasco was acquired from the Indians with Fransisco Lindor, but he suffered a torn hamstring which kept him out all season so far. Carrasco was terrific in 2020 for the Indians, which is all the more impressive since it came a year after he was diagnosed with leukemia. Carrasco made 3 rehab starts for the Mets (2 dominant, 1 where he got rocked). The good news for the Reds is that his longest start was 3.0 innings and 41 pitches, so he probably will not be going very deep tonight. Carrasco has a 3.43 career ERA against the Reds in 6 starts and 1 relief appearance. His only start agains the Reds last season was very good: 6.0 IP, 1 H, 0 R, 4 BB, 8 K.

Joey Votto enters play having homered in 6 consecutive games, a Reds record. Can he keep the magic alive tonight? He has homered off Carrasco in his career.

The bottom of the Reds lineup is really struggling. Here are the numbers of the last 30 days:

Every Reds fan would have liked to see the Reds do more at the deadline. We will never know what the asking prices were for players, and time will tell if their lack of aggressiveness today pays off or not in the long term. That being said, there were plenty of moves that happened around the league that helped the Reds.

*the Brewers did not acquire any massive upgrades, or game changing players. They had some nice upgrades to their bullpen, and Eduardo Escobar will help their lineup, but none of those pieces or players currently on the IL comes close to outweighing the players the Reds currently have planned to return soon. I know that people hate that thought process, and it can certainly be an annoying company line at times, but it is the truth.

*the Cubs traded Kris Bryant to the Giants. The Reds are done playing the Giants, the team with the best record in baseball. The Brewers play them 7 times. The Reds finishing ahead of the Padres for the second wild card spot seems a bit far-fetched, but the Giants play the Padres 10 more times also.

The only real positive on the Brewers side is they play the Nationals 7 more times to the Reds 4, but the Reds already easier schedule over the final two months got a lot easier today. This series with the Mets is huge before the rest of the schedule becomes very favorable. Hopefully the Reds can get a jump start on capitalizing on the schedule with a big series win against the Mets. Let’s hope this is an NLDS preview. Go Reds!