After splitting the first two games at Wrigley Field, the Cincinnati Reds (52-49) and the Chicago Cubs (50-52) will compete tonight to decide which team takes control of this four game series.

Although he’s had a couple of bad starts this season, Mahle has been one of the most consistent pitchers on the team this year. One of those rare bad starts came on July 16 against the Brewers when he allowed five runs on six hits in 5.1 innings. He did, however, strike out eight that day. He rebounded by pitching five innings of two-run baseball in the win against the Cardinals last Friday night.

Mahle has faced the Cubs twice this season, both at Great American Ball Park. It didn’t go well in May when he allowed six runs in five innings, including three home runs. On July 3rd, however, he allowed just one earned run on five hits with seven strikeouts in five innings.

Zach Davies has not had the best of seasons. In fact, he’s been one of the worst pitchers in the league, according to Baseball Savant. 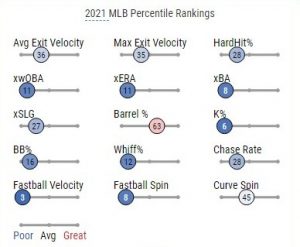 The 28-year-old right-hander’s most recent start in Arizona was probably one of the best of his season, as he surrendered two runs on seven hits. He walked two, but struck out a season-high eight batters.

Part of the reason why Davies’ stats are terrible is that he had a horrific start to the season. He gave up 20 runs in 19.0 innings in April. This month, he’s only given up nine runs in 19.1 innings. He’s started to improve, but his walk rate is still at almost 12 percent. He also doesn’t strike out a lot of batters, as his 15.5% strikeout rate is in the bottom six percent of the league.

Davies has four pitches, but really only relies on two: the sinker and the change up. His sinker has averaged 87.7 this season, while his change up averages 78.1 mph. His change up has always been his best pitch, and consequently his whiff rates have consistently been in the lower-to-mid 30% range throughout his career.

Stat of the Day

At 37 years old, Joey Votto of the @Reds is the oldest NL player to homer in 4 straight games since Barry Bonds did it at age 41 in 2005.

Votto is on one of his hot streaks where you want to watch every one of his at-bats, and it’s even more impressive now since he’s nearly 38 years old.

The Reds have been active in the trade market in the past 24 hours and Redleg Nation has you covered with all the news:

Luis Cessa and Justin Wilson from the New York Yankees

Mychal Givens from the Colorado Rockies

And it looks like two of the three new relievers will be in Chicago tonight: