On the Fourth of July, a spectacular Sunday with high skies and low firecrackers, those who trespass against us appeared.

I was pacing the skyline at the top of the Mt. Adams steps when I saw them: Cubs fans. Two of them. Matching jerseys. They were here for the game and also Mass but mostly to test my growth as a human being. No supervisor on shift here.

Work in education at the Red Hall of Fame and Museum created a long-since rustified reflex to attach a big smile and greeting to fans in opposing jerseys. This current manifestation of opposition stood in the distance, glancing down at an information plaque, looking at the skyline, pointing in various directions, glancing down again. These people had read the guidebooks on Where to Go When In Cincinnati for Holiness. They’d Yelped.

The sanctified nature of Holy Cross-Immaculata Church renders this, traditionally as well as spiritually, neutral ground. For a variety of reasons, not the least of which was the giant crucifix looming behind me, I needed to Be Nice. 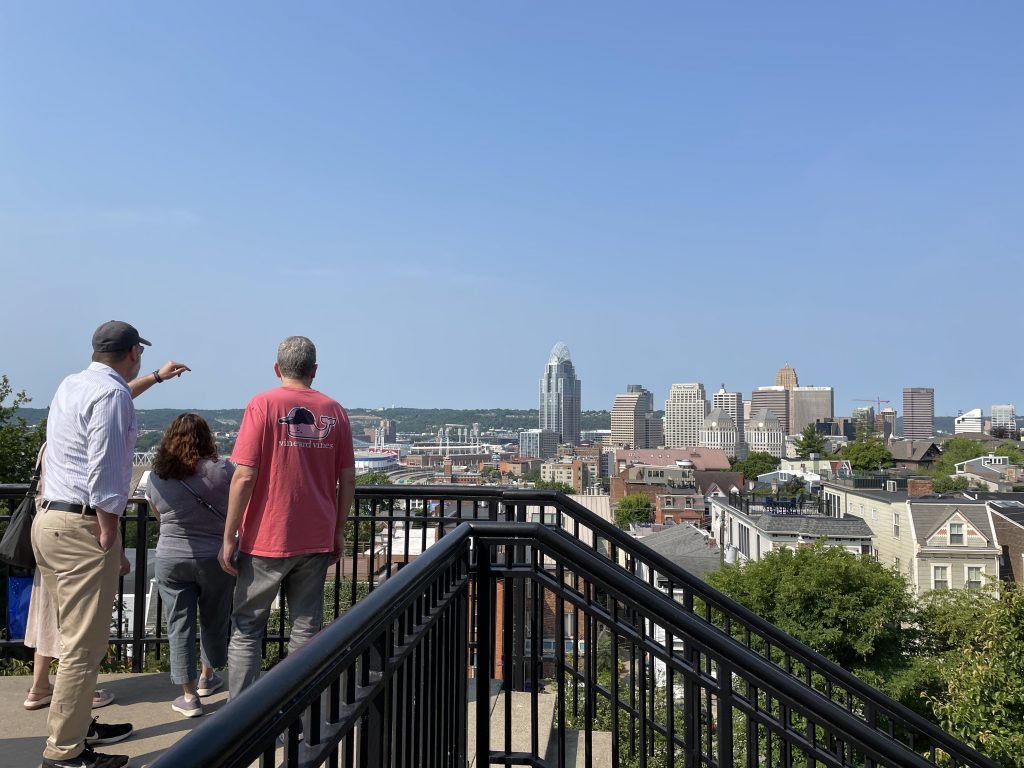 It’s easier to shift the blame to electrons and think of us as a meaner society now that we can send insults and threats at the speed of Internet, all anonymously and all with the backing of our equally anonymous cohorts. But I’ve been struggling with Being Nice long before the screeching of a modem dial-up entered it.

Part of this was due to my insta-flash sensitivity and heavy involvement with politics. Of all the reactions to 9/11, the one I understood and embraced the least at the time was the following, from a person whose name I do not remember: “If every single Catholic has not prayed for the people who did this, you’re not doing what Jesus told you to.” Oh. Ow.

Okay, but has Jesus met Cubs fans? Has He seen “Catching Hell“?

This is why they send 18 year olds into war and onto the baseball diamond instead of 44 year old writers, I’m sure, but I had grown so accustomed to self-protection and radiating resentment waves at other-side human beings that it felt alarming when I tried to stop. Sometimes I fail to feel rage at stupid memes and I don’t even know who I am anymore.

But on this Independence Day, I continued walking back and forth behind the couple from Chicago, which is totally normal and fine and not at all creepy. They were fellow baseball fans, sibling human beings, spending money in my city. Maybe they would drop some cash in the collection plate of this struggling, historic parish. Okay. Just like when you had the employee tag on. Be Nice.

Credit where it’s due: I did not glare at their backs in the Communion line.

Credit where it’s not: I should have approached, offered a friendly greeting, and ensured they had no questions about where to go, what to do, and which chili to avoid. Then prayed for them, then prayed for Rob Manfred and Bob Castellini and the Bobblehead People.

Am I getting there, as a better human being? Maybe I’m getting there. Then again, I said “I’ll have to meet you, IT’S TAKING FOREVER” last week very loudly into my phone in a long deli line , so I could probably use some prayers from Chicago.