The Cincinnati Reds (40-40) will host the Chicago Cubs (42-39) tonight at 7:10 PM to kick off a big three game series at Great America Ballpark. The Reds are coming off a much needed comeback win last night. The Cubs threw a combined no-hitter last Thursday against the Dodgers, but since then have lost six straight games. The Cubs were humiliated in Milwaukee, getting outscored 31-11 in the three game sweep.

The Cubs pitching is really struggling of late. The Cubs starting pitchers had a 5.19 ERA/5.11 FIP in the month of June. Even the strength of the Cubs in 2021, their bullpen came back down to Earth in June posting a 3.83 ERA/4.40 FIP. Kris Bryant and Anthony Rizzo have also missed the last couple games for the Cubs with injuries. 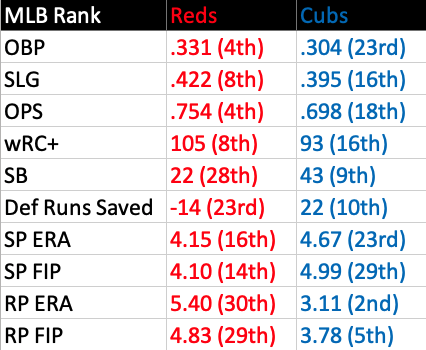 Alec Mills has split time between the rotation and the bullpen. He has only made it through five innings once this season. He allowed 3 runs in 1 inning of relief this season against the Reds. He does however have a 3.74 career ERA in 33.2 innings against the Reds.

Reliever Michael Lorenzen began his rehab assignment last night out in Goodyear when he threw a perfect inning for the rookie-level Arizona Complex League Reds.

After being the best hitter on Team USA during the qualifying round five weeks ago, catching prospect Mark Kolozsvary was officially named as a part of the team that Team USA will be sending to Tokyo to represent the United States later this month in the Olympics. He is currently playing with the Double-A Chattanooga Lookouts and has an .848 OPS.

Ashton Goudeau optioned back to Triple-A

In order for Sonny Gray to make the start tonight the Reds needed to make a roster move. That move turned out to be the optioning of reliever Ashton Goudeau back to Triple-A, just like we all expected.

They say that momentum in baseball is only as good as the next night’s starting pitcher.  It’s a good thing for the Reds that they have Sonny Gray back on the mound tonight. The Brewers look unstoppable right now, but just like the Cardinals came crashing back down to Earth after their hot start earlier in the season, the Brewers time is coming. The Reds just need to win series and things will sort themselves out over time. Go Reds!