The Cincinnati Reds (21-25) are coming off a big win last night against Max Scherzer. The Redlegs will try to make it a winning streak tonight at 7:05 at the Washington Nationals (20-24). The Reds would secure their first series win in two weeks with a win tonight.

Jeff Hoffman will make his 10th start tonight. The Reds are somehow 5-4 in his starts this season. The command is the most frustrating thing to watch with Hoffman. He was pretty good in his last start (2 hits and 1 run in 5 inning vs the Brewers) with the exception of walking 3 straight batters (the 6-8 in the Brewers order) to walk in a run. Hoffman has a career 5.63 ERA in 3 starts against the Nationals. 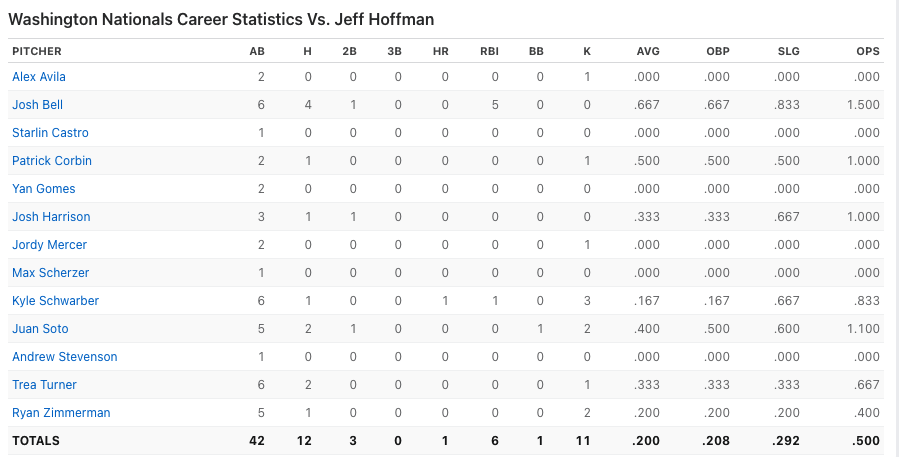 Joe Ross is the type of pitcher that you can hit hard, but you have to be patient. His best ability is his chase rate, which ranks in the 63rd percentile. Batters have a 1.216 OPS vs Ross when they get ahead 1-0 in the count. If they fall behind 0-1, the OPS against is just .565. Ross has pitched well against the Reds in his career. He has a 2.84 ERA in 3 career starts.

Eugenio Suárez remains in the leadoff spot to no surprise. Batting a struggling hitter leadoff to get him going might sound bizarre, but last night Suarez came to the plate with the bases empty in every plate appearance. That certainly won’t always happen, but he should bat with the bases empty much more often than batting in the middle to bottom of the order. A strikeout with the bases empty is really just an out and does not feel nearly as deflating than when there are runners on base. It might take some pressure off Geno.

This afternoon the Cincinnati Reds announced that outfielder Nick Senzel would undergo knee surgery on Friday. The general recovery time for this is 4-6 weeks. Doug Gray wrote more about it earlier today and has quotes from manager David Bell on the injury.

Last night’s win was huge for the Reds. You don’t expect to beat Max Scherzer very often. Despite the Reds going just 2-2 in their last four games, they’ve actually picked up 1.5 games in the standings. The Cardinals struggles have got the Reds back within 4.0 games. Go Reds!