After an offensive breakthrough and an impressive show put on by Jesse Winker last night, the Reds (20-23) look to continue the climb back to .500 in the second game of the weekend series against the division rival Milwaukee Brewers (21-23) at Great American Ball Park. First pitch will be thrown at 4:10 EDT.

You can watch the game on Bally Sports Ohio or listen on 700 WLW. If you’re going to the game, there’s no rain forecasted, but it’s going to be hot, so be prepared and drink water accordingly. 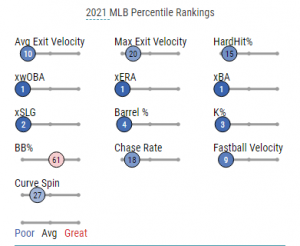 This is the graphic on Brett Anderson’s Baseball Savant page for his season currently. Something tells me the Reds are either going to score a bunch of runs or get shut out today, with no in between. I think it’s safe to say that the 33-year-old left-hander isn’t having the best season, which of course means the Reds bats might go cold again today. Let’s hope last night was the beginning of an offensive tear.

Anderson has only pitched 24.1 innings so far this season, despite starting every game. Sonny Gray, who started the season on the injured list, has already pitched more innings. Aside from one start against the Pirates in which he went 7.0 innings, he hasn’t pitched more than five innings. After the Pirates start, in each of his last three starts, Anderson has pitched a total of seven innings. In his most recent start against the Braves, he gave up four runs on eight hits with three strikeouts and three walks in just 3.2 innings.

Anderson throws six pitches, with his sinker ball being the one he goes to the most (49.6% of the time). His pitch that had the best whiff% rate a year ago was his slider at 38.8%. This year, his whiff rate on the slider is just 18.5%.

Right-hander Sonny Gray makes his seventh start of the season, and although his record of 0-3 won’t attest to it, he’s pitching decently since returning from injury (This is why you disregard pitcher wins). Of the 13 earned runs he’s allowed, five were to the Cardinals in his April 23rd start.

-Jesse Winker looks to keep building his MVP case, as he’s back in the lead off spot.

Looking for some Jesse Winker fun facts? Here you go:

If Votto’s wearing a glove on the hand with the fractured thumb, it’s a good sign for both him and the Reds.

Joey Votto's on the field taking fungoes with a glove on. I wasn't here yesterday, but this is the first I've seen that.

Here are a few notes from Jesse Winker’s career game and other observations.

Quite the interesting story from the newest Reds reliever, Brad Brach. He bypasses the Olympic qualifier because he wants to be back in the big leagues. And he looked pretty good last night with his 95-mph fastball.

And if you’re looking for results from the Reds minor league affiliates last night, look no further than here.