Wade Miley’s 2021 magic took a night off at Coors Field. Miley was coming off his first career no-hitter a week ago in Cleveland, but tonight in Denver he had a rough night. Miley allowed 8 earned runs tonight, matching his entire season total in his previous 6 starts entering the evening.

The Reds for a second straight night tried to put together a big comeback. Jonathan India and Eugenio Suarez each homered, and the Reds got a 6-run deficit down to 3. That would be the closest they would get. 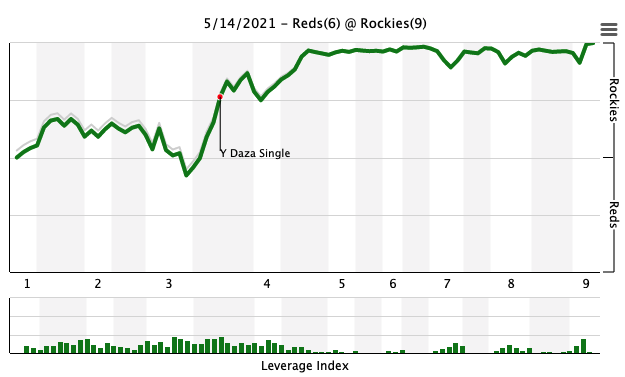 According to Fangraphs WPA statistic (winning percentage added), the most important play of the game was Wade Miley allowing an RBI single to Yonthan Diaz (runner moved to 3B), giving the Rockies a 3-2 lead. That play decreased the Reds probability of winning by 11.2% (from 34.8% to 23.5%).

Jonathan India has hit home runs in back-to-back games after just hitting one long ball in his first 77 at-bats in the big leagues. Tonight’s home run was a massive 451 feet with an exit velocity of 108.7 MPH. India also doubled earlier in the game. Senzel and Moustakas currently being banged up makes you think that India is going to find his way into the lineup quite a bit in the near future. The Reds certainly could use him getting hot.

Eugenio Suarez is really starting to look like he is coming out of this. He destroyed a hanging breaking ball 415 feet. Take a look at Suarez’ week:

Shogo Akiyama had a 2-hit night filling in for a scheduled off day for Castellanos.

Ryan Hendrix and Cionel Perez each pitched scoreless innings. That was much needed for both guys.

Heath Hembree allowed the two runners Miley left on 2nd & 3rd to score on a single, but then proceed to strike out the next three batters. What a pickup he has been. He still has not allowed an earned run in 8.0 IP.

Art Warren made his Reds debut. He walked two batters, but he did pitch a scoreless inning.

Pretty cool of Art Warren to get promoted while in Denver…and to pitch tonight. He said in today's media Zoom session that his brother lives nearby and was able to attend tonight's game.

Also, Art Warren is one of the nicest human beings you'll ever meet.

Wade Miley‘s no-hitter might have come at the worst time, coming right before a start at Coors Field. Miley threw 114 pitches in his last start in Cleveland, his most since 2017. We will never know if that for sure made a difference or not, but it certainly did not help his performance tonight. Miley’s ERA jumped from 2.00 to 3.69 in about 90 minutes.

The Reds defense and base-running left some to be desired. They had two errors on the night (Moustakas, Miley), and that doesn’t include a ball that Suarez should have turned into an out and Shogo’s arm possibly costing a run. India made a silly out on the base-paths.

Mike Moustakas had to leave the game early again.

Jeff Brantley revealed tonight that he once accidentally purchased a $500 belt at John Sadak about passed out on air. It is the little things that get us through nights like this.