Luis Castillo’s slow start to the 2021 campaign was not helped by Coors Field. The first inning woes continued, as the Rockies scored three runs in the first. It all fell apart for Castillo in the fourth. The Rockies got a pair of cheap hits, and then poured it on against Castillo, scoring five more runs to chase him from the game.

That might not even have been the worst part of the game. Nick Senzel had to leave the game with a left heel contusion running into the wall in the first inning.

The Reds as they’ve shown all year didn’t go away quietly. The Reds scored 8 runs in the top of the 8th, and cut the deficit to 10-8.

The small deficit did not last long, as Cionel Perez got rocked in the bottom of the 8th. The Reds fell 13-8 in just another wild game at Coors Field. 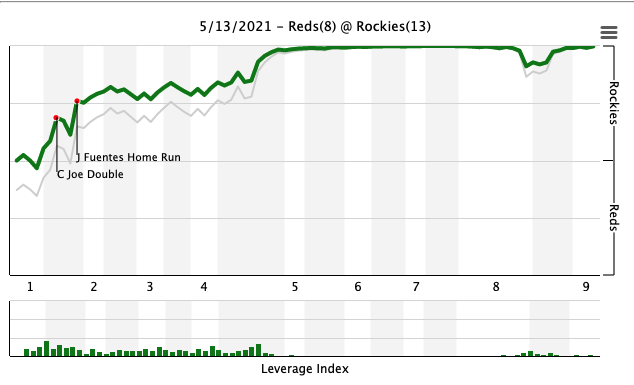 According to Fangraphs WPA statistic (winning percentage added), the most important play of the game was Luis Castillo allowing a 2-run home run to Josh Fuentes with 2 outs in the first inning, giving the Rockies a 3-0 lead. That play decreased the Reds probability of winning by 14.7% (from 38.7% to 24.0%).

Jonathan India had a 2-hit night, including a big (at the time) 3-run home run.

Shogo Akiyama got his first hit of 2021.

On a night where every other pitcher was awful, Sal Romano pitched a perfect inning.

Luis Castillo gave up a career high 10 hits tonight. The Rockies certainly had their share of cheap hits, including a home run with a .270 xBA. It is just hard to watch him pitch right now. He can’t seem to locate his off-speed pitches well enough, which is putting everything else out of wack. I still have full belief that he will pull it together, but it’s not a lot of fun watching him try to get to that point right now. Castillo has a long enough track record to have belief in him.

Cionel Perez looked really bad in the 9th inning. He came in after the Reds cut the deficit to 10-8 and proceed to walk a batter with a career 77 wRC+ and then get rocked. Perez clearly has some talent, but it’s hard to see what value he provides the Reds at this stage.

Jonathan India had a bizarre throwing error in the bottom of the 8th. He did not need to throw the ball home on a relay (the runners had stopped at 2nd & 3rd), but he did and airmailed it allowing a runner to score. That certainly didn’t help an already struggling Cionel Perez.

Nick Senzel went down with an injury again. I’m not going to speculate as to what this means, but it’s a brutal time for him. He looked like he was really turning a corner at the plate. Mike Moustakas also left the game early. It looked like he cut his finger on the net chasing a foul ball. The Reds were down 8-0 when he left the game. I would imagine he probably sticks out the game if it was close.

#Reds David Bell said Moustakas (shoulder) will be "back in the lineup for sure tomorrow." Said he didn't expect Senzel's injury to be a long-term issue

The Reds offense got shutdown for a second straight day against a really bad starting pitcher. The Reds scored 1 run in 12.1 innings off Trevor Cahil and Chi Chi Gonzalez.

This certainly is not a one size fits all comparison, but maybe some perspective on Castillo. He has made 8 starts now in 2021. Anthony DeSclafani made 7 starts and 2 relief appearances last season for the Reds. Our guy Disco was really bad in 2020. He lowered his ERA to 2.14 (3.16 FIP) in his 8th start of this season earlier today.