I don’t mean: Explain this boring inside joke of a conversation. I mean: What is actually, physically inside a regulation Major League Baseball baseball?

One of my favorite exhibits at the Reds Hall of Fame and Museum addressed this. It was the type of museum display children dashed past on their way to find computer-based exhibits to pound, sit on, spit at and then turn to me, great surprise on their faces, to announce that “this doesn’t work.”

When I shepherded school groups through the museum’s upper floors, I used to point to the case holding the bisected specimen and say hey, look, you wanna throw something at somebody? Here you go. Here’s what’s inside. This always impressed the children to the point that they would pause an extra.000000000001 second to ask when lunch was.

After the crowds cleared out and I helped pick up the Fritos bags left by the NO FOOD ALLOWED IN MUSEUM signs, sometimes I’d stop in and study my unraveled friend. There it was. This tiny little white cause of all the trouble. 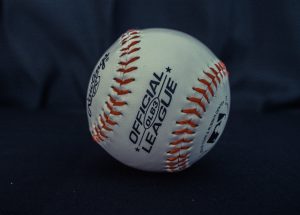 The guts of one single baseball spread through a long horizontal case. The specimen was between nine to nine and one-fourth inches in circumference and, in its wholeness, weighed five ounces, perhaps five and one-fourth.

It is no small feat to cut apart a baseball. It’s a thing meant to be whole. A baseball enters the world expecting to be thrown, slammed, launched, skidded through the mud; it was not constructed to deconstruct.

So you must take care when splitting open a baseball, perhaps in an attempt to improve upon it. But in so doing, you end its purpose.

Living beings give of their own skin to create the two figure-eight shapes that, arranged in opposition to embrace one another, present the baseball to the outside world. The cover of a baseball is of the finest Midwest Holstein cattle. It was grass once. It was living.

Some say it’s best to start by cutting apart the baseball’s unifying piece, the red thread holding together the cowhide cover. Others unlace the protective parts, which takes longer but at least allows the historical whole of the yarn some dignity. The binding thread is waxed so as to better unify the pieces, and each ball is stitched by hand over a period of thirteen to fourteen minutes. Too much reliance on machinery, you see, results in defective, loose, and altogether wobbly baseball. People are simply better at pulling the pieces together on their own.

Once you slice into the outside of a baseball, there’s no putting it back together again. Because this is what’s within:

“Many cheaper baseballs,” says Scientific American, “have only a solid mass of cork/rubber amalgam under the first layer of yarn but with a pro ball the yarn has only just begun.” The relationship between the yarn and the middle of the ball are in forever balance: push and pull, weight and air, nature and synthetics.

Once launched into motion, however, that which preserves the wine and seals the gasket can arc for hundreds of feet. Cork is little but trapped air; a baseball in flight is simply oxygen returning to itself.

This is only possible, however, when the baseball is left to be itself, to function as designed. Because once you slice it open, there’s no winding and pulling it back together again. It took generations to get here: The tree. The grass. The air. The cow.

And some would say the yarn has only just begun.