The Cubs got off to a quick start when Kris Bryant homered off Wade Miley. The Cubs scratched another run across in the second inning to take a 2-0 lead. Miley helped himself in the top of the third with a single. Miley then went first to third on a Jesse Winker single. Nick Castellanos hit what looked like an easy double play, but some nice hustle allowed Miley to score and the inning to continue. The inning staying alive proved to be big as Joey Votto blasted his 300th career home run to put the Reds up 3-2.

The Reds offense was not done. Eugenio Suarez blasted a much needed home run to put the Reds up 4-2.

Tyler Naquin singled and then Nick Senzel homered to increase the lead to 6-2.

The Reds would scratch across two more runs. Wade Miley got through five innings. Things got hairy in the 9th when Fulmer and Sims each walked a batter. Sims should have struck out two batters, but the umpire called clear strikes, balls. Either of those would have ended the game. Tejay Antone came on and finished off an 8-6 win. The Reds have now won 3 of 4 against 2020 division winners. 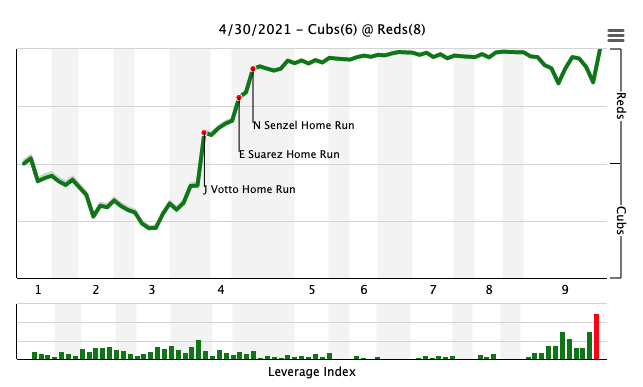 According to Fangraphs WPA statistic (winning percentage added), the most important play of the game was Joey Votto’s  2-run home run with 2 outs in the third inning, giving the Reds a 3-2 lead. That play increased the Reds probability of winning by 23.1% (from 40.3.% to 63.5%).

Joey Votto hit his 300th career home run during a 3-hit night. It was a very special moment seeing how excited each of his teammates were as they came out of the dugout to greet him.

Eugenio Suarez snapped his 0 for 26 stretch with a home run. That has to feel incredibly good for Mr. Good Vibes. Let’s hope this will help him relax and his season will take off soon. Believe it or not, Suarez is only 2 home runs behind his 2019 pace through 25 games.

Nick Senzel homered to continue strong back-to-back games. Senzel had 4 hits in the final game against the Dodgers. Senzel made his first career start at 2B, and even made a nice play on a tricky slow grounder (more on that below).

Good old reliable Wade Miley showed up again. He gave up a whopping 9 hard hit balls according to Statcast, but somehow, someway managed to just allow 2 runs over 5 innings. Miley now has a very good 2.67 ERA/3.91 FIP on the season.

Jesse Winker had to leave the game with some back pain. It seems to possibly be precautionary. The Reds obviously can not afford to lose Winker.

Nick Senzel started at second base tonight and it went well. He was moved to centerfield in the sixth inning as part of a double switch (Farmer took over at 2B). I hope this is a sign of things to come. The Reds would make Senzel so much more valuable by moving him around the field. Tyler Naquin at this point seems to be a better option against RHP that at least one of Senzel or India, and Shogo Akiyama is coming soon. The Reds could have Senzel and India split starts at 2B vs RHP, and then whenever the opponent brings in a left-handed RP to face Naquin/Akiyama, you pinch-hit Senzel or India. You can also use Senzel or India at 3B to either give Moustakas or Votto a day off (Moustakas sliding to first base). This flexibility puts your best lineup on the field and simultaneously protects you if an injury happens.

There was some discussion on the Reds TV broadcast suggesting that Winker be moved down in the lineup to have more PA with runners on base. I really don’t see the value of doing that against a right-handed SP. Winker has massive career splits (.942 OPS vs RHP, .608 vs LHP). By batting him leadoff vs a RH SP, you are increasing the probability of facing the RH SP three times. By moving him lower in the lineup, you are at a higher risk of that third PA being vs a LHP. I love Castellanos batting second, a guy who crushes LHP. Tonight, the Cubs actually pulled their SP before Winker, and they had to pay with their LH RP facing Castellanos. One way the Reds could try to get more baserunners on for Winker would be to bat Barnhart 9th when he starts. Barnhart’s best hitting attribute is his ability get on-base.