Cincinnati Reds right-handed pitcher Tyler Mahle has probably been the best Reds starter through the first month of the season (which is saying something given it’s a rotation that also boasts Luis Castillo and Sonny Gray). Through five starts and 25.2 innings, Mahle has a 1.75 ERA and a 2.81 FIP. He’s allowed only two home runs, while walking 11 and striking out 36 batters. His eye-popping 35.3% strikeout rate is currently among the top ten percent of major league starters in the entire league. His two most recent starts have been the most impressive of this young season. At home against the Arizona Diamondbacks, Mahle pitched 6.2 shut out innings while allowing two hits and striking out nine. On Monday at Dodger Stadium, he gave up one run on five hits in five innings.

Mahle hasn’t always had this type of success. He burst onto the scene in 2017 with a 2.70 ERA, albeit in a limited 20.0 innings. Over the next two years, he struggled as he adapted to the league, with his ERA hovering around 5.00 and his FIP in the mid-4.00 range. So what was he doing at that time, and what is he doing differently now?

While the Reds called up Mahle in 2017, 2018 was his rookie season.. That year, Mahle threw more fastballs, 67.7% of his pitches, than at any other point in his career. He also gave up 22 home runs in 112 innings, including eleven off his four-seam fastball. Not only did he give up the long ball, hitters were not missing his pitches. Mahle got only a 29.4% whiff rate on his slider, and even less than that on his fastball at 22.4%.

He improved his pitch mix during the 2019 season, but was still throwing his fastball a lot more than other pitches at 57.1 percent. Something odd happened though. He abandoned his slider for a cutter and threw both his curve ball and his split finger significantly more than in 2018. This resulted in his worst season in the big leagues. Mahle ended with a 5.14 ERA and a 4.66 FIP in 129.2 innings, surrendering 25 home runs in the process. For what it’s worth, he did have the lowest walk rate of his career that year at 6.1%.

A flip switched inside Mahle during the 2020 shortened season. He began to experience increased velocity and even better, an increased spin rate on nearly all of his pitches. Hitters were swinging and missing a lot more. He had a 41.5% whiff rate on his slider, a 22 percent increase from the last time he threw the slider in 2018 and his fastball whiff rate increased from 21.3% in 2019 to 31.6% in 2020. Mahle also gave up the least amount of home runs he had up to that point, only six in 47.2 innings.

Mahle has also increased his spin rate from previous years. As seen on the chart below, he increased his spin for two pitches; however, he has rarely thrown his curve ball and has yet to throw one in 2021. The spin rate on his fastball has jumped significantly in the last two years, and it’s paying dividends for him. He’s making batters swing and miss more than ever before, as his 31.4% whiff rate indicates, and 22 of his 36 strikeouts have come via his fastball against 59 batters. Last year, he had 30 strikeouts off his fastball against 106 batters. 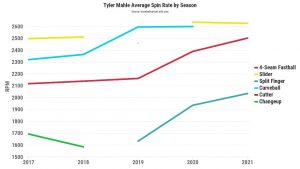 In conclusion, Mahle has become more comfortable throwing his off speed pitches, and it’s led to better pitch mixing. Combined with the increased spin rate and velocity on his fastball, most likely learned from pitching coach Derek Johnson, he’s improved his best pitches in his effort to become one of the best pitchers.  He truly is an evolving player, steadily working on his craft to keep getting better each season.

Statistics from Fangraphs and Baseball Savant.