The Cincinnati Reds got off to a great start as Jesse Winker ambushed Los Angeles Dodger starter Walker Buehler. Winker continued his scorching start to the 2021 campaign by sending the first pitch of the game into the bleachers. The Reds took an early lead for a second straight night, which was refreshing since prior they had not lead in 38 consecutive innings before taking the lead yesterday.

Unfortunately for the Reds, Walker Buehler started looking like……. Walker Buehler for the next couple innings. The Reds had a threat with runners on 2nd & 3rd with 1 out in the top of the 4th, but Buehler struck out Naquin and Blandino. Reds starter Jeff Hoffman danced around trouble for the first three innings, but he walked the first two batters in the fourth inning. Will Smith made him pay with a 3-run blast.

The Reds didn’t quit down 3-1. Walker Buehler had not allowed 3 earned runs in any of his last 13 starts including the postseason. Kyle Farmer doubled after a Barnhart HBP, and the Reds were in business. Tyler Stephenson fought off a 0-2 pitch for an RBI groundout. That is when Jesse Winker continued to be the hottest hitter on the planet and tied the game.

José De León could not get the job done, and the Dodgers immediately took the lead back. He was one batter away from likely getting Walker Buehler out of the game. The Reds trailed 5-3 after five innings.

The Reds still wouldn’t quit. They got a rally going in the 7th when Barnhart, Farmer and Castellanos singled. Joey Votto came to the plate with 2 outs and the Reds trailing 5-4. Votto was facing a left-handed pitcher, but he found a way to rip a double down the line to put the Reds up 6-5.

The Reds burned their top two relievers yesterday as Sims threw 32 pitches and Antone threw 53. The trio of Fulmer, Hembree and Doolittle found a way to get the job done and finish off a thrilling 6-5 win. The Reds have secured a series victory against the defending world champions. They came in losers in 7 straight games. Baseball is a funny game. 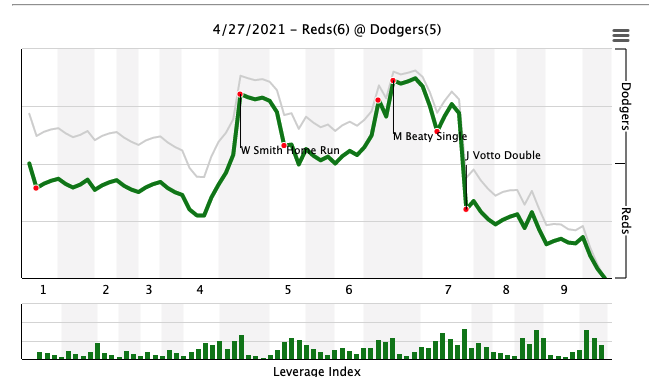 According to Fangraphs WPA statistic (winning percentage added), the most important play of the game was Joey Votto’s  2-run double in the 7th inning, giving the Reds a 6-5 lead. That play increased the Reds probability of winning by 42.0% (from 28.0% to 70.0%).

Jesse Winker extended his hitting streak to 12 games. He carried the Reds offense with a solo home run, RBI single and a double. He even made an out on a sharp liner with an expected batting average of .490.

Kyle Farmer snapped an 0 for 16 stretch with a double off the wall, and a single later.

Nick Castellanos had two hits, and made a crucial catch on the run, near the wall.

Ryan Hendrix touched 98.0 MPH on his fastball. He got the Reds out of De Leon’s jam in the 6th. Hendrix has certainly showed some promise in his brief time with the club.

Carson Fulmer, Heath Hembree, and Sean Doolittle combined for 3.0 no-hit innings to preserve the Reds win. The only baserunner came on a terrible ball 4 call against Hembree. What a job by these guys.

Jeff Hoffman walked 5 batters tonight. You can’t do that against any team, especially the Dodgers. Hoffman still has a shiny 3.33 ERA, but he has got to find a way to limit the traffic on the basepaths if he wants to have any chance.

José De León walked and hit a batter, and gave up 3 hits. He allowed the Dodgers to immediately take the lead after the Reds fought so hard to tie it.

The Reds offense just never gives up. They grind out every at-bat, even when they are down. We have saw multiple times where they have fought back and just not been able to get over the hump (see Opening Day vs St. Louis and last Friday at St. Louis). Tonight was the night they were able to break through. I know that it’s hard to give moral victories for those nights at the time, but the collective fighting every at-bat eventually pays off. It did tonight.

Something, something, Angel Hernandez. It is insane that man has a job. It’s too late to write anything else about that guy that has not already been said.