The Cincinnati Reds hope to break their seven-game losing streak tonight in a 10:10 p.m. start against the Dodgers at Dodger Stadium.

Before you surrender to the notion that this is shaping up as a no-win situation, keep in mind that the Dodgers have lost five of their last seven. After their 13-2 start, L.A. has come back to earth a bit. Cody Bellinger is injured and out of the lineup. As you’ll see below, Manager Dave Roberts’ lineup tonight is not exactly Murderer’s Row.

Joey Votto has the day off from the starting lineup, with fellow slumper Eugenio Suarez hoping to get untracked against lefthander Julio Urias.

Mahle has emerged as arguably the Reds’ most effective starting pitcher in the early going. His strikeout percentage is eye-popping, slightly diminished by his high walk rate. The next step for Mahle, which might be to elite status, is for him to stop nibbling around the corners on most batters. This drives his pitch count up, which in this day and age means a reduced chance to stay in the game long enough to make a difference at big moments. If he will trust his stuff consistently, he could join the short list of top-end starters.

Urias is 6-0 over this season and 2020 and has conquered control issues which were a problem for him earlier in his career. He’s one of many shut-down arms on the Dodger staff.

We probably won’t see Carson Fulmer tonight after two impressive innings Sunday against St. Louis. Everyone else should be available as needed. (Can’t wait to see more of Ryan Hendrix.)

With lefthander Urias pitching, Reds Manager David Bell has gone with an all-righthanded-batting lineup — with the exception of otherworldly Jesse Winker.

Reds batters haven’t seen much of Urias in their career:

Comparatively, Dodgers hitters know what to expect from Mahle: 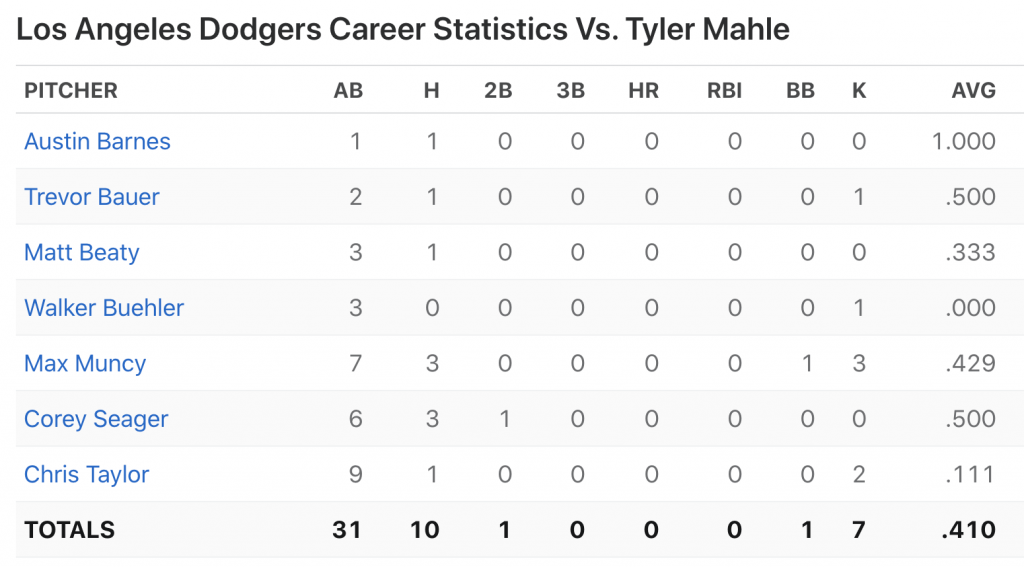 This Dodgers lineup, while formidable, doesn’t exactly make you shiver in your shoes. Mainstays Cody Bellinger and Justin Turner are not starting. Bellinger is injured and will not play in this series.

David Bell said there are no plans at this point to have Nick Senzel spend more time in the infield. He's played one inning at third and one inning at second when the team was short on the bench this year. #Reds