Reds starter Jeff Hoffman was shaky through the first three innings, but escaped a big jam in the top of the third inning to keep the Reds deficit at 1-0. Indians starting pitcher Logan Allen retired the first seven batters of the game with ease. The door opened for the Reds when Kyle Farmer reached base on an error and Tyler Stephenson was hit by a pitch.

Jeff Hoffman was prepared to give himself up with a bunt, but Allen threw a wild pitch to move the runners to second and third. The Reds luck continued when Hoffman singled on a ball with an exit velocity of just 65.1 MPH.

The Reds luck got so wild on a Jesse Winker RBI single that it literally broke Twitter dot com. Winker’s single had an 82.8 EV and an expected batting average of just .070.

Nick Castellanos singled to give the Reds a 3-1 lead. That chased the Indians starting pitcher Logan Allen. They brought in Phil Maton, and he did not have a better fortune. Eugenio Suárez drove in two more runs with a double and some aggressive base running from Castellanos.

Joey Votto really put an exclamation point on the third inning when he hit a 2-run home run to give the Reds a 7-1 lead. It was Votto’s third home run in the past four games.

Jeff Hoffman settled in and pitched well with the lead. He got through six innings allowing just one run. Tyler Stephenson had a 2-RBI double with the bases loaded, and Nick Castellanos really poured it on with a solo home run to extend the Reds lead to 10-1. The bullpen mostly did their job, and the Reds finished off a 10-3 win. 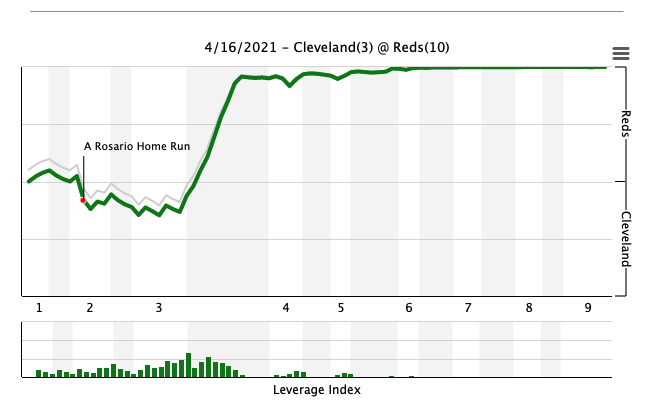 According to Fangraphs WPA statistic (winning percentage added), the most important play of the game was Amed Rosario‘s solo home run in the second inning, giving the Indians a 1-0 lead. That play decreased the Reds probability of winning by 10.6%% (from 52.4% to 41.8%). The biggest play in the Reds favor was Jesse Winker‘s RBI single the third inning, giving the Reds a 2-1 lead. That play increased the Reds win probability by 8.8%.

Joey Votto continued his monster week with a home run and double. Votto has 3 home runs and 5 RBI over the last four games.

Nick Castellanos hit his 5th home run of the season. That ties him with Tyler Naquin for the team lead.

Newly called up Max Schrock had a hit in his first career at-bat with the Reds.

Jeff Hoffman got the job done tonight for the Reds. He now has a sizzling 2.93 ERA on the season. Hoffman has certainly been a bit lucky, but he still has a 4.44 FIP on the season. I think most of us would gladly take that from him over a full season.

Cionel Pérez did pitch a scoreless inning, but he walked another batter. Perez has walked 6 batters in 5.1 innings this season.

The Reds seemingly great off-season pickup in the bullpen Cam Bedrosian continues to struggle. He gave up a homer tonight.

The Reds will remain at least in a tie for first place, but the Pittsburgh Pirates are currently leading the Brewers 4-1. If that score holds, the Reds will be alone in first place. The would have a full two game lead on the Cardinals and a three game lead on the Cubbies. If the Pirates hold on tonight, they will be 5-3 since they were swept by the Reds (they played the Cubs, Padres and Brewers).