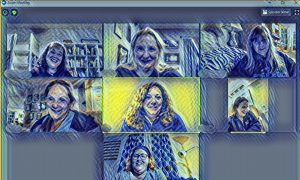 On a Zoom call on a weekend night, their faces appeared one by one. The women I met when we were eighteen were middle-aged now– mothers, professionals, owners of vehicles. I did my best just after we parted ways upon graduation to freeze us there forever, when we’d lay on the ground with our bodies half in our tiny rooms, half in the hallway, trying to scrounge up enough people to share in ordering a pizza so that three slices were affordable.

But it didn’t work. They moved on, the wretches. I was the wretchiest of all. It started after our freshman year, to be honest, when one went to Ireland, four left the dorm, and I got a boyfriend. It happens. It’s supposed to.

There were. Barbara aimed the phone as he held up five kittens, one by one. The Reds score scrolled past on my Twitter feed. I turned the screen to face the desk. Perhaps this is why we follow each game one the basis of pitches instead of runs; it’s more manageable this way. Time makes sense in baseball, throw on throw. We don’t begin a game with a 90s perm and at the bottom of the fifth suddenly discover that a single semester at the alma mater could now purchase a fine home in Omaha.

Barbara sat with her son in her lap as he colored with markers on construction paper; Kelly showed off the art therapy site she built. Carah mentioned that she’d run seven miles, here on this day six weeks from her due date, and we yelled at her, not out of fear that she might endanger the baby, but for making the rest of us look bad.

This was ostensibly a book club meeting, but it turned into four minutes of discussion of the actual book and three hours of yelling about which male dorms were the grossest and the best. And it is for this reason we sit in the ballpark in pods, whether the rules posted outside the stadium mandate it or not– there’s only so much you can take of the off-speed pitch, the on-base percentage, the RISP. Sometimes we need to turn the head from the scorecard and say “He barely made that” and “Where’d Whatchamacallits go in the candy aisle?” Not always. But enough so it’s nice to have them around.

We’re all half in our tiny rooms, half out into the hallway right now. Just how far that is depends on how much we interacted outside the cloister of our homes before the pandemic, and the ways in which we allowed it to change us, for better or worse. Did you miss the karate lessons? If not, they probably haven’t reappeared on the calendar and neither you nor your kid care. Are you immunocompromised? You’re probably closer to the door than the hallway despite the two jabs in your arm, and that’s okay.

In the meantime, hold up your kittens and nod to your pod. We’re changing. It happens. It’s supposed to.