So you see, the Reds lead MLB in runs scored, OPS and SLG. They're currently tied for most homers in the league. Oh and also in first place in the NL Central… pretty neat, right? pic.twitter.com/9Hg1XIjwIi

It is pretty neat! I didn’t see any way to justify an expectation that a team that hit .210 as a team in 2020, with essentially the same cast returning, would rebound offensively. It may be a small-sample-size statistical oddity, but I certainly hope not. At 7-3, the Reds are a game ahead of the Milwaukee Brewers and have the chance to finish this early West Coast road trip at .500 or better. Tonight they try to win their second straight contest against the San Francisco Giants in a game that begins at 9:45 p.m. Eastern time at Oracle Park.

As someone on Twitter said earlier today, Cincinnati is on pace to win 113 games. Pretty neat!

Castillo, of course, has been a tale of two stat lines in his first two appearances. Roughed up big-time on Opening Day, he bounced back with seven innings of shutout ball against Pittsburgh. In those two starts, he’s relying on his 95.4 mph fastball 50 percent of the time, with the 86 mph change at a 35.7 percent rate. The slider, which was ineffective on Opening Day, has only been used 14.3 percent overall.

With both pitchers, you’ll see one of their top two pitches about 80 percent of the time, with a secondary offering being used mostly for show the other approximately 20 percent.

Tejay Antone is likely to be the only pitcher unavailable tonight, after his brilliant 3.2-inning scoreless relief outing last night.

Cincinnati’s lineup and batting order, with the exception of pitcher Luis Castillo, is identical to Monday night. San Francisco Manager Gabe Kapler, on the other hand, has someone different in every slot of his batting order for tonight’s game. And, five different players are starting defensively than did Monday. The Giants are largely a platoon team, and Castillo being a righty — as opposed to lefthander Wade Miley last night — accounts for the wave of change by Kapler.

Tonight’s Reds starters have had good success against Gausman over the course of his career: 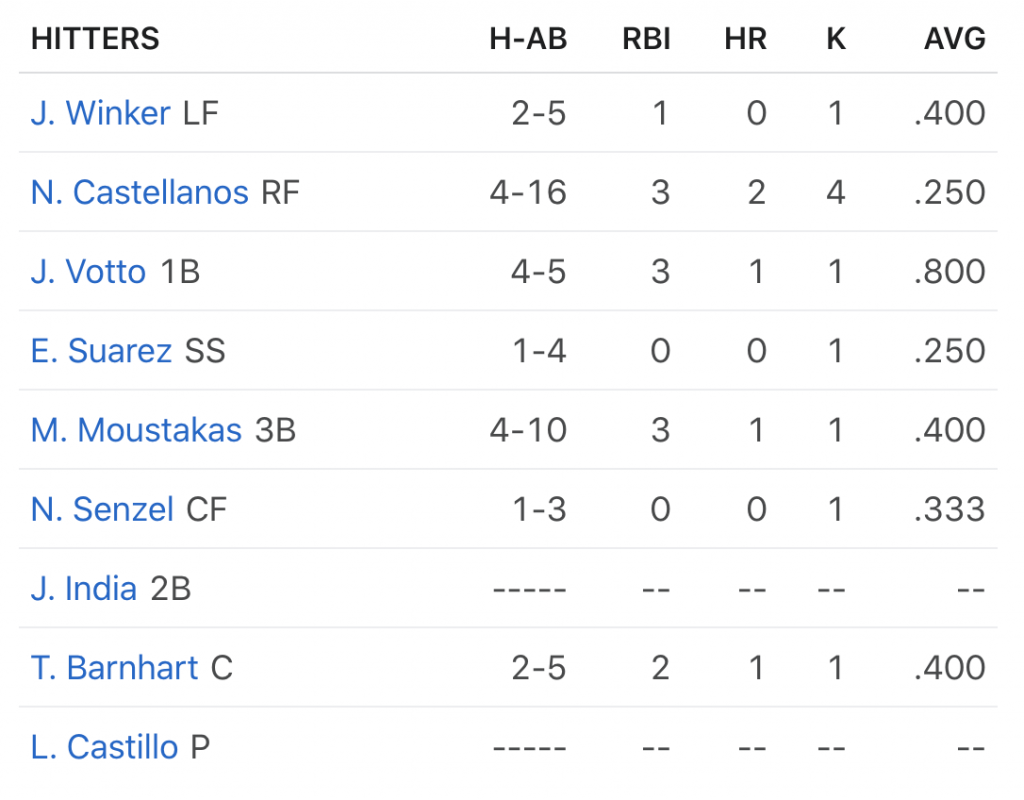 Comparatively, Giants hitters haven’t seen as much of Castillo. San Francisco’s starters tonight are a combined 2-for-24 against the righty.

Joey, who is tied for the major league lead in home runs?