Some major life events don’t happen with a phone call or a positive pregnancy test, but unfold with the slowness of a river barge. They float through the middle of our lives, adjusting with the current, there but not obtrusively there.

So it goes in the first spring and summer of my life without following baseball. At the same time this happened, Josh The Pilot’s tactical kilt arrived on our doorstep.

“The kilt and I are going on our first outdoor adventure,” he announced on the morning of Opening Day. 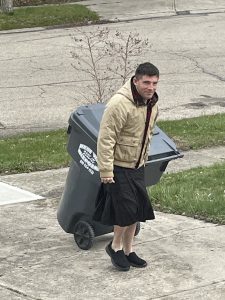 “How did it go?” I asked as he and the kilt returned from their brave march up the driveway.

“Cold,” he decided, and I remained silent on the fact that kilts originated from coverings used to keep sheepherders warm on the Highlands, and in exchange, he waited until yesterday to announce to me that kilt wool was originally waterproofed by soaking it in urine.

Since then, the kilt has been laundered and its best folding method determined. It has met the neighbors.

“I’m going to show Kathy my kilt,” Josh said when he saw one mowing her lawn. He showed it to our barista. He showed it to his pastor. He nearly murdered his sister-in-law when she referred to it as “a skirt.”

During the re-lockdowns this past fall, Fr. Mike Schmitz counseled that if we don’t feel as if we miss regular church attendance and reception of the Eucharist, then we should ask ourselves what we’ve used to replace it in our lives. And so I wondered: By consciously not paying attention to baseball, w 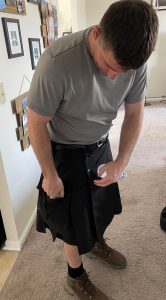 hat might creep into the great silence left by the radio patter and clang of weights dropping into the on-deck circle?

Some women keep baby books; I have, over the past ten days, amassed a comprehensive tactical kilt diary.

For Josh decided that it was time to wean the kilt from the house and that it should accompany us on a hike.

“We’re not going far, and it isn’t hot yet,” I pointed out when he suggested that we tank up our water backpacks. “Isn’t this what the kilt is for?”

He brightened immensely as I handed him two 16-ounce bottles of water. They slid into a pocket on each side with room to spare, so I handed him his phone as well. This was declared as “feeling weird with the water already in there,” so I sighed and slipped into my own pocket.

“First time driving with the kilt,” he said as he backed out of the driveway. Fortunately, we’d already had a tutorial in how one properly sits in a skirted clothing item without causing scandal. 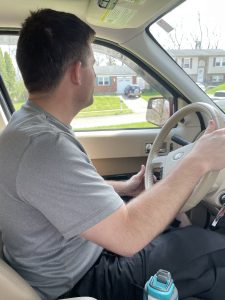 As it happened, driving in the kilt seemed to offer few advantages over driving with pants, but we rolled the windows down and no arrestable offenses took place as the wind dashed past us. It’s normal to drive in a kilt. It’s just normal. People do it all the time. It is a thing to get used to, and it is gotten used to quickly.

At the trailhead, Josh and I checked our social media feeds before setting off, and he showed me pictures of Texans grinning and waving at the Rangers home opener.

“That’s great,” I said. “I’m glad that as many fans want to attend can be there.”

My husband and the kilt sloshed off into the wilderness. They had set off. So be it.

I followed the trail. 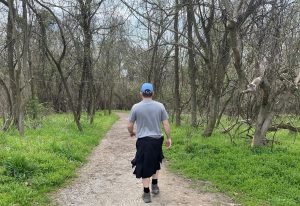