It has only been four games, but the energy and passion from the 2021 Cincinnati Reds is palpable. Since a nightmare first inning on Opening Day, the Reds have played inspired baseball. They have competed in every at-bat. Each pitcher has stepped into their role and thrived. The Reds fell behind early tonight, but the offense kept grinding out at-bats until they finally broke through.

The Pirates jumped out to a 2-0 lead on a pair of solo home runs off José De León on Monday night. The Reds got on the board in the 2nd as De León helped himself with an RBI single. It was his first MLB hit.

De León settled in and pitched right out of a big jam caused by a Suárez error in the third inning to put two runners on base. De León struck out the Pirates 2-5 hitters. He cruised from that point on and finished the night with nine strikeouts. Mike Moustakas tied the game in the 5th inning on an absolute missile.

The Reds bullpen continued their early season dominance to keep the score tied into the 7th inning. That is when Nick Castellanos said “suspend this.” The rumor going around is the Cardinals had to stop their game in Miami for some reflection time.

Lucas Sims pitched a perfect 8th inning in his 2021 debut. Jonathan India and Aristides Aquino drove in insurance runs in the 8th.

Amir Garrett struggled in his 2021 debut, but he was able to finish off the Pirates on a nice play by Eugenio Suárez to preserve the win.  The Cincinnati Reds are 3-1. 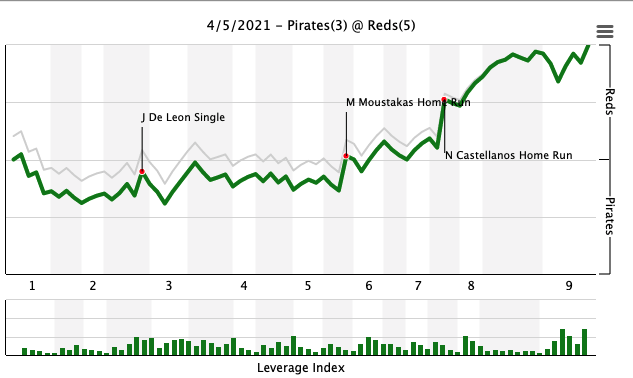 According to Fangraphs WPA statistic (winning percentage added), the most important play of the game was Nick Castellanos solo home run with 1 out in the bottom of the 7th, giving the Reds a 3-2 lead. That play increased the Reds probability of winning by 21.0% (from 55.2% to 76.2%).

José De León gave the Reds all they could ask for: 5.0 IP, 3 H, 2 R, 2 BB, 9 K. The most impressive thing of the night for me was that he only walked 2 batters on the night, something that he has struggled with his small MLB career and this spring.

Mike Moustakas hit his first tater of the year, and he made it count: 110.2 EV, 430 feet. He also ripped a double later in the night.

Jonathan India has now hit safely in all four games to start his big league career. He singled in a big insurance run in the 8th.

Tonight, Doolittle has hit 96. He’s another Reds pitcher with a velocity increase.

Eugenio Suárez committed another pretty bad error. The Pirates had a runner on first. There was a ball hit to Votto, he soft threw a ball to Suárez that he just flat out dropped. Suárez appeared to be rushing to try to get a double play. He did make a solid play to end the game coming in and making a nice throw. It was the kind of play where if he would have rushed too fast, he could thrown the ball in the stands and allowed the Pirates to tie the game.

Amir Garrett was shaky in his 2021 debut. He gave up a home run, single and a walk. He survived, but his walk rate is a concern if he wants to be the top guy in the Reds bullpen.

How good is John Sadak? He is just so fun to listen to. You can just feel the joy in his broadcast. It is so refreshing to have someone in the booth who clearly is so appreciative of the opportunity to call Reds games.

Best Tweet of the day summing up how ridiculous the Castellanos suspension was.

That Castellanos suspension is wild too because you figure at some point MLB will use that video of him scoring and flexing as part of an ad campaign ?