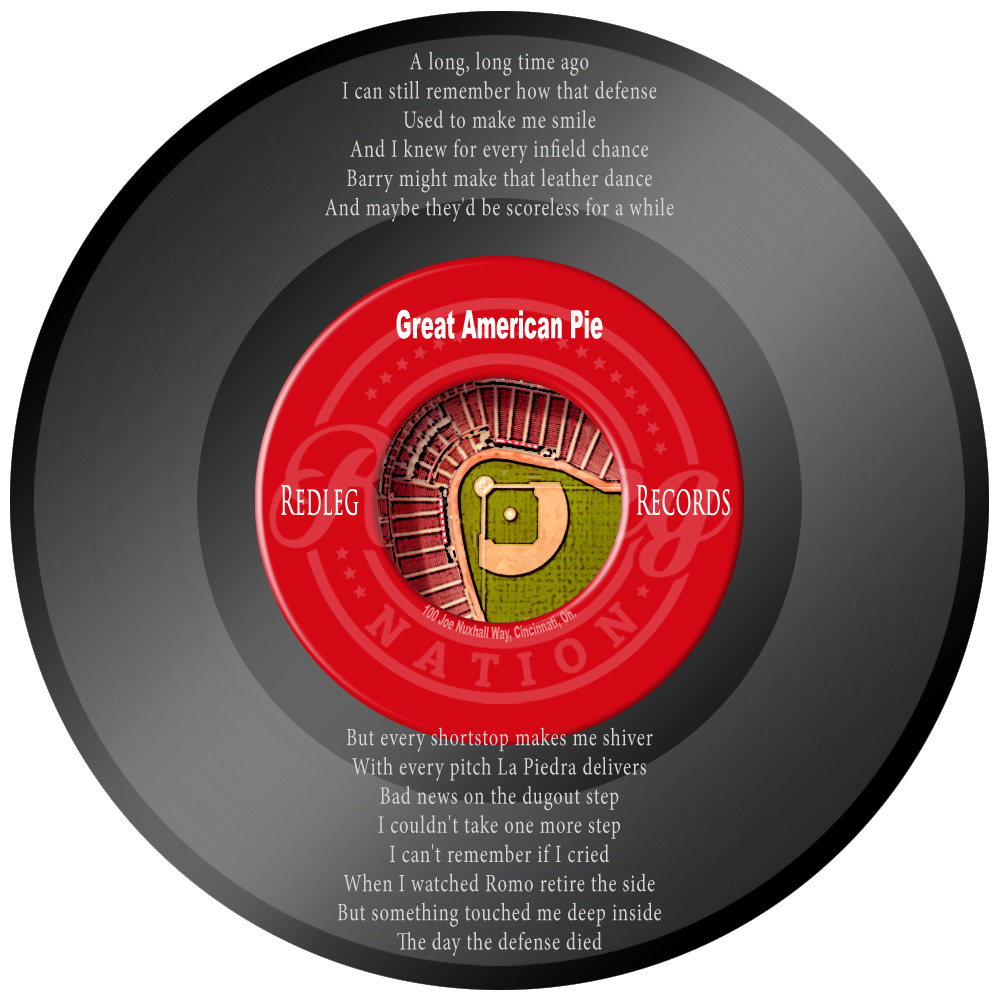 For many, the two most memorable days Homer Bailey ever spent on the bump for the Cincinnati Reds were a September night at PNC Park in 2012 and a July evening 10 months later at Great American Ballpark. And yet, his greatest day was likely sandwiched in between, on a cool October afternoon in 2012 against the San Francisco Giants in the cauldron of the NLDS. Those first five no-hit innings and Bailey’s final line that day: 7 innings, 1 hit, 1 earned run, 1 walk, and 10 strikeouts, was the defining moment of his tenure as a Red. It was a gutty performance destined to drive the final nail in the sorry narrative that was the Reds’ postseason series victory drought, one that stretched back to 1995. As the post-season pitching matchups were being set, I distinctly remember Homer saying he was more comfortable pitching away from GABP, so his performance that day on the river burnished the memory all the more for me.

In the end, what would happen in the 10th inning rendered Homer’s day a footnote in Reds’ history. The ever-dependable Scott Rolen would misplay a ground ball, allowing the go-ahead run to cross the plate, and unbeknownst to everyone, signal the beginning of the end of the 2012 season for the Reds.

Game 5 is notorious for many reasons, most of which centered around the fifth inning, when Mat Latos, he of the famous temper, the kind that left him looking like a petulant, over-sugared child on the mound, watched rookie shortstop Zack Cozart bobble an easy chopper, allowing the game’s first run to score from third. Latos, hereafter known as Mat Vesuvius, had already gone down on one knee to get out of the way of Cozart’s throw home, but then chose to accentuate his inner strife by dramatically holding the pose, laying one arm over the other and dropping his head as if to say, “Why is this happening to me?” 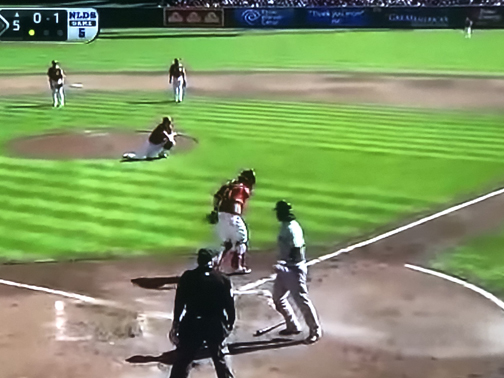 There are many reasons the Reds failed to advance past the 2012 NLDS, not the least of which was Johnny Cueto’s soul-crushing oblique injury that occurred before the last strains of the National Anthem had drifted out over the bay. Of course, Dusty Baker’s laissez-faire approach to the series in general added its own special patina to the proceedings. Thanks for that, Dusty.

But those two errors at critical moments stuck with me, and maybe they did with you, too. Why? Because defense is expected. When extra outs are given, it feels as if the fabric of the game is being ripped. “Four outs? That’s certainly not how the game is played.”

Now that ownership has decided that shortstop is a non-essential, to instead let Derek Johnson’s boys carry the load and hope last season’s free agent haul can find their 2019 feet, it might be time to help out the pitching staff and improve a defense behind Sonny Gray, Luis Castillo, and Co. that lately—well, let’s just say it—has been less than stellar.

Our Redlegs have taken a particular fondness for playing players out-of-position of late. They seem to have fallen in love with the Ben Zobrist Approach, players who can fill multiple roles, utility men supreme.

When the Reds announced Eugenio Suárez had become the latest contestant on Cincinnati’s top-rated show, WHO WANTS TO PLAY SHORTSTOP?, I already had, like the cautious, timid chess player I am, moved Geno off his position at third. But where? Pushing him up one square to left field was a non-starter. Jesse Winker and to a lesser extent Shogo Akiyama already owned that space, and the outfield, as overcrowded as Thanksgiving at O’Hare, couldn’t take another visitor.

In my opinion, two things need to be accomplished straight away: (1) improve the defense as best as possible with the current roster; and (2) get Nick Senzel to the infield where he belongs.

Senzel epitomizes the new trend toward Zobristing the game. Some would suggest his value is increased by his ability to play multiple positions. In reality, Nick has been sentenced to servitude in centerfield because—not unlike ownership’s predicament at shortstop—they are devoid of a true centerfielder, and Senzel’s considerable athletic ability has made him the obvious stopgap solution. Likewise, Mike Moustakas, third baseman by trade, has been shuttled out of position to second because a more valuable tenant resides on the corner.

Moving Suárez to short and settling Moustakas into his more natural position at third begins to solve multiple problems. Most importantly, moving Senzel to the keystone improves the infield defense and may even aid Suárez in transitioning to a position he’s never going to be more than adequate playing. Sliding Akiyama into centerfield gets him more at-bats without sacrificing too much of Senzel’s defensive abilities there. And, with the news that Aristides Aquino is out of options, perhaps the case can be made that Infield Nick would mean more room for Outfield Aquino?

Shoehorning players out of position to get more offense into the lineup comes with its own set of drawbacks. No one enjoys the nostalgia of Pete Rose’s generous offer to play third to make room for George Foster more than I. But, this is not the 1970’s, Linda Ronstadt posters no longer adorn my bedroom walls, and well, you get the picture.

Unfortunately, this has all seemed to revolve not around Senzel, but Jonathan India. The Florida Gator has chomped spring training pitching so far. One gets the feeling the Reds are making these moves all with intentions of potentially installing India at second base. It feels like a mistake.

Forget that spring training at-bats are suspect for a moment. This is about Senzel.

Jeebus, people. The first-round reward for all that rebuild suffering was the overall #2 pick out of Tennessee. And make no mistake, the Reds have had their way with him, using the service time rules to the organization’s advantage. They’ve shoved him out of position. They talked him into revamping his swing. They’ve used him, then misused him. If the Reds value Nick—and they should—if they wish to keep him in the fold when the time comes to sign him long term—and it says here they should—they need to start doing right by Nick Senzel. That starts by moving him to the infield dirt where he belongs.

Yes, he’s the best centerfielder the Reds currently have, and excuse the double-negative, that’s not nothing. But, he’s more comfortable at second. He improves the infield defense. He has a better chance of staying healthy at second base. And maybe if the Reds can muster an honest contract offer to their best young everyday player, Nick can become the cornerstone to replace the soon to depart Votto.

I have no metrics to back this up, but if players are free from the angst and extra work of preparing to play out of position, might that free them to concentrate on their hitting? Might these moves not just improve the defense behind this valuable pitching staff, but also have the potential to make the offense more potent?

If listening to Reds fans has taught me anything, it’s that we don’t value defense. It’s a shame because people are working harder than ever before to help us understand the value of catching the baseball, then turning that skill into outs. Your dad didn’t value defense because all he had to go on were the vagaries of the official scorer and little else. And This Week In Baseball’s Mel Allen shoveled batting average and RBI with every Saturday morning bowl of Wheaties.

Offense has always ruled the day. It’s visual. It’s visceral. It’s valuable for its ease of measure. Defense? Not so much. In some ways, the new metrics have created a more polarizing view of the game. Defensive Runs Saved? Ultimate Zone Rating? Outs Above Average? They measure the same ground from different angles and at different temperatures. Like political parties, they often agree on very little. Because defense is difficult to measure, we on the other side of the rail throw up our hands and tend to undervalue it. For us, a run saved is never equal to a run scored. Cincy Shirts won’t be printing t-shirts that say “Chicks dig the force out” anytime soon.

A couple of years ago, Joey Votto hit a home run out in Oakland that was turned into an out by a beautiful leaping catch over the fence. A journeyman pitcher named Mike Fiers wielding a sparkling 6.81 ERA was further aided by an extraordinary diving catch by Jurickson Profar, both of which helped seal an improbable no-hitter. The Reds went on to lose 2-0. How much was that defensive worth that night? You don’t need an SQL table to figure it out.

It’s become fashionable to cite The Shift and the Three True Outcomes as reasons why defense doesn’t matter anymore. And maybe that’s true, assuming your boys can out-slug the competition night-after-night and your back of the rotation pitchers can miss bats each time their turn comes up. But, sooner or later in a game, even your swing-and-miss #1 starter will need the boys to turn a crucial double-play to keep the game in hand. Said Rose heading into the 1976 season: “Our defense is spectacular and that’s what wins a lot of games for us.” But, by all means, let’s ignore the lessons of the Big Red Machine era, the yellowed newsprint, the faded black and white view of the game it left behind. That was decades ago. It might as well have not happened. Go ahead, ignore defense. Cram your best hitters into the lineup card with little consideration for the fielding consequences. Just get ready for the inclement leather on the horizon.

It’s difficult to know how the Reds value defense. Every team has their own internal metrics. According to Eno Sarris, Outs Above Average said that Freddy Galvis was a better defensive shortstop than Francisco Lindor. We all know the Reds hired Freddy because he was cheap, but did we also just dismiss him and his mediocre bat without a second thought to his contributions with the glove? Or was all this just The Shift. Can a team simply shift its way out of bad glovework and slow-footed players? Rob Arthur over at FiveThirtyEight wrote this. It may be relevant to the Cincinnati Reds. It may not:

Teams may be late to understanding the value of good defense. Mitchel Lichtman, the sabermetrician who created the defensive metric Ultimate Zone Rating, told me in an email that “it will probably be a long time before teams fully appreciate the proper mathematical role of defense in evaluating players and making transactions.”

Defense undergirds the game, providing the undercurrent for more shiny and profitable endeavors. It too often labors under the yoke of ignorance. We ignore it at our peril.