The words roll smoothly off the tongue like a threadbare tire on new tarmac, so here it is: “it’s not over ‘til it’s over.” The Cincinnati Reds could still solve their shortstop conundrum via trade before the Goodyear sun sets on Joey Votto’s fresh red kicks. Absolutely.

But, sorry, yeah, it feels pretty much over.

Having been squashed by the recent penny-pinching whims of ownership, the creeping murmur of the moment suggests the Reds will hitch their shortstop wagon to a patchwork of infielders and pray for divine intervention from the baseball gods in the form of fortuitous bounces, bounce-back seasons, and, well, the Shift.

In the words of the great Miss Shirley Bassey, “it seems quite clear, that’s it’s all just a little bit of history repeating.”

To fully grasp how predictable all this was, we must, dear reader, venture into the past via Mr. Peabody’s Wayback Machine to the year 2012. 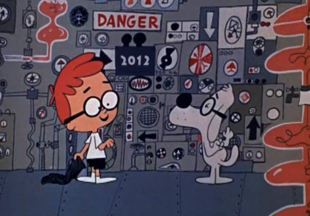 After a breakthrough 2010 season, hastily followed by a disappointing 2011 campaign, having recently harvested four prospects from the system soon to be in full bloom – Homer Bailey, Johnny Cueto, Joey Votto, and Jay Bruce – having traded away much of what was left in the form of Yasmani Grandal, Brad Boxberger, and Yonder Alonso for #2 starter Mat Latos – the Reds were right where they wanted to be.

You see, the Redlegs still had a leftfield problem. The Jonny Gomes/Fred Lewis Experiment was played-out. What remained was a giant, gaping hole in the championship plans of the team down by the river, plans majority owner Bob Castellini laid out when he and his ownership group took a controlling interest in the Reds in late 2005.

While the Reds’ front office was working the trade for Latos, outfielder Carlos Beltran was looking for a new team. Coming off a season with the Mets and Giants that saw him launch 22 home runs and hit .300 with a .385 OBP, he could have been the final piece in the puzzle for the sure-to-be playoff-bound Reds.

But Walt Jocketty was playing with Monopoly money, while John Mozeliak was removing the rubber band and peeling off fresh benjamins like Tony Soprano at Meadow’s sweet sixteen party. The St. Louis GM would sign Beltran for 2-yr/$26M. Weeks later, the Reds would settle for Ryan Ludwick via a 1 year, $2.5M contract. Yes, Ludwick and Beltran went on to have very similar and successful 2012 seasons, but who thinks Dusty Baker wouldn’t have rather had Beltran’s 6-year 137 OPS+ average to fill out a lineup that was in its once-in-a-decade wide-open window over Ludwick, who was 4 years removed from his 151 OPS+ season in San Diego? In place of Ludwick’s injury-wrecked year, how likely is it that Beltran’s 2013 All Star season would have prevented Cincinnati’s desultory 2013 finish?

But that’s what the Reds’ coffers had to offer as the 2011 calendar turned over to 2012, as the payroll inched upward an incremental 6 or 7 million dollars at a time when the Reds were primed to make a run to the World Series. Yes, ownership would sign Votto to the largest contract in organizational history in April of 2012, but his previous contract would play out first, and the real money wouldn’t kick in until 2016.

The Votto signing would turn out to be a false flag, an olive branch to the fans, yes, and an even bigger PR victory, but, in hindsight, not a full commitment to winning big. Money to Votto. Thanks. More money to Brandon Phillips. Kudos, Bob. Going the final mile was another matter.

Ownership is not the only one repeating history. We on the public side of the railing blame those most immediate to us. Players. The manager. Then the GM. It’s an old fable. First Jocketty. Then Williams. When Williams left, having done all we could reasonably ask of a GM, rebuilding the foundation of the organization, bringing the Reds into the 21st century, hiring some of the brightest, cutting-edge minds in the field of pitching development, having coaxed ownership into spending free agent money in a manner they never had before, Doug Gray wrote back-to-back pieces here asking the questions, “WHAT WAS THE BEST/WORST REDS MOVE OF THE DICK WILLIAMS ERA?”

The former received 39 comments, and the latter 83. So, it’s no surprise that Nick Krall is being blamed for the latest offseason, just as Williams was before him, and Jocketty before them all. The last GM to escape our wrath was Wayne Krivsky – and that was only because he was fired before he could disappoint the populace and join the others to form our new Mount Rushmore of despised GMs.

When will we ever learn?

Bound and gagged with payroll constraints and with apologies to Simon and Garfunkel, it’s time we turn our lonely eyes to the ownership group of the Cincinnati Reds.

When Mike Moustakas was signed, there were concerns, not the least of which was a 4-year deal for a player who likely wouldn’t be worth it the last year or two. It was those first two years of hopeful production that would be the difference, that would carry the burden of the rest of the contract. The same could be said of Nick Castellanos and even Sonny Gray, who signed a very favorable contract that is ticking away season by season. Having wasted time, Bob Castellini now sees time wasting away at all those favorable contracts his front office negotiated in recent years. As ownership retreats, the sand in the hourglass of those friendly signings continues to slip away. Add Eugenio Suárez’s deal to that list. Locked behind those private suite doors, ownership is effectively sabotaging its earlier success. It’s the inversion of all that previous well-intentioned spending. The dragon is now eating its own tail.

There is an entire class of player who doesn’t fall into the category of coveted starting pitcher or elite superstar. Many were available at reduced prices. Yet, Reds ownership is stuck in their Ryan Ludwick mentality. Thus, no viable shortstop in Goodyear. No obvious replacement for two-fifths of the rotation and the back end of the bullpen.

All of this is unfair to Sean Doolittle. A good guy who could be a bargain if he returns to form, he’s a smart pickup by the Reds. Unfortunately, he’ll be the new Skip Schumaker in Reds fans’ eyes if things go poorly. He’ll become the latest social media avatar to the cheapness that has too-oft been the Reds’ legacy, not because they are cheap, but because they won’t go that last mile.

Behind Castellini is the ownership group and the unknown sway they hold. Whether the investor is VC entrepreneur Jack Wyant or minority owner and automobile salesman Jeff Wyler, we’ve been told they’re just along for the feel good ride. “You write a check and you go to the games, and that’s the extent of your influence.” Maybe. But, ever since Wyler invaded our Sony Trinitrons to sell the idea that “cars, like eggs, were cheaper in the country,” it’s had me wondering if he, the Williams family, and the rest of ownership think baseball players should be cheaper in the country, too. We know better, as former Red Johnny Cueto and current Dodger Trevor Bauer told us with their backs as they walked away to bigger towns, greener bank account pastures.

I hope that someone with Mr. Castellini’s ear is on social media and shows him this:

A lot of players are begging to be with the Reds because of our player development. Just looking back on my own minor league career I can say that I’m not sure if I would have made it to the big leagues if it wasn’t for people like @ericjagers @drivelinebases and many others

If the above is true, what a shame if the Reds don’t leverage their newfound dedication to cutting-edge development techniques like the Tampa Bay Rays have done for years, while having the wisdom to eschew the Rays’ empty-pocketed economics.

Meanwhile, in some quarters, “enough” has a decidedly different definition:

… when it came to free agency, the Mets pursued big fish, but lacked the tactical or financial push to land Trevor Bauer, J.T. Realmuto or George Springer … you can explain each away. But that is a Wilpon thing, close but no big star in free agency. Cohen pledged not to spend like “a drunken sailor.” However, generally handcuffing the organization to stay under the $210 million luxury tax threshold is being done why exactly?

It’s no longer a choice of smart player development vs. big spending. Both now exist side-by-side, each in service of the other. Ownership doesn’t have to heed the advice of the New York Post and put payroll into luxury tax territory, but they’ve got to do better than fall outside the top third of industry payroll every year. They’ve got to tell the public what the organizational plans are if they expect people to plunk down their disposable income, especially in these volatile times. They’ve got to show people they’re willing to go that last mile to compete for a championship, not just make a postseason that, if Major League Baseball has its way, will soon include your local beer league team.

As Shirley said, “Some people don’t dance if they don’t know who’s singing.”