We’ve been hearing rumblings that owners around Major League Baseball have wanted to push the start of spring training, and the regular season back, that is something that the players must agree to do. The players reportedly asked the season to be extended a month if the season were pushed a month, giving them a full 162 game season at full pay. The owners said no to that back in December according to a report by Ken Rosenthal of The Athletic.

But it’s not just Major League Baseball and the players that have an opinion on spring training beginning on time. This morning the Cactus League board, which is made up of the mayors, city managers, and community presidents of the cities and towns that host the league, is asking to delay things due to the high infection rate in Maricopa County, where all of the teams play. They cite the projected data from the IHME that projects a “sharp decline in infections in Arizona by mid-March” as the reason they would prefer things be delayed, making it safer for everyone involved in operating spring training.

With that said, the 10 members of the Cactus League board met with Major League Baseball last week to discuss things. The letter sent out by the board does not note whether the players association was involved at all, which given that they do mention the involvement of Major League Baseball suggests that they weren’t. This could simply just be the owners trying to do what they can to put more public pressure on the players association. Of course, Maricopa County does have one of the highest infection rates in the entire country, too, and there are a whole lot of people beyond just the players that are involved

There’s a lot of stuff going on here. As noted above, the players and the league have to both agree to a delay. That is, of course, unless there’s something legally that prevents the teams from training/playing coming from government restrictions. That’s what would allow the commissioner to step in and make a decision on his own. As things stand right now, that does not apply in this case.

Spring training is set to begin in a matter of three-and-a-half weeks. Whether it starts on time or not is a big question, but it’s also not the only question. The National League still isn’t sure if they will have the designated hitter again in 2021, and that’s led to a lull in free agency for a few players who are trying to figure out if they are limited to just signing with half of the league’s teams or if they can sign with any team in the league.

All of that to say: buckle up. There’s probably going to be some public fighting going on here, and soon. This morning saw Ken Rosenthal write about how starting spring training on time was a bad idea. A few hours later the letter from the Cactus League board came out about postponing the start of spring training. The players, of course, want a full season and they want to be paid in full for it.

Bill Shaikin of the Los Angeles Times noted after this was published that there are NHL games happening in Glendale, Arizona right now that has fans in attendance. He actually wrote about a lot of this nearly two weeks ago, before the Cactus League board put out their statement.

The MLBPA has released their own statement. 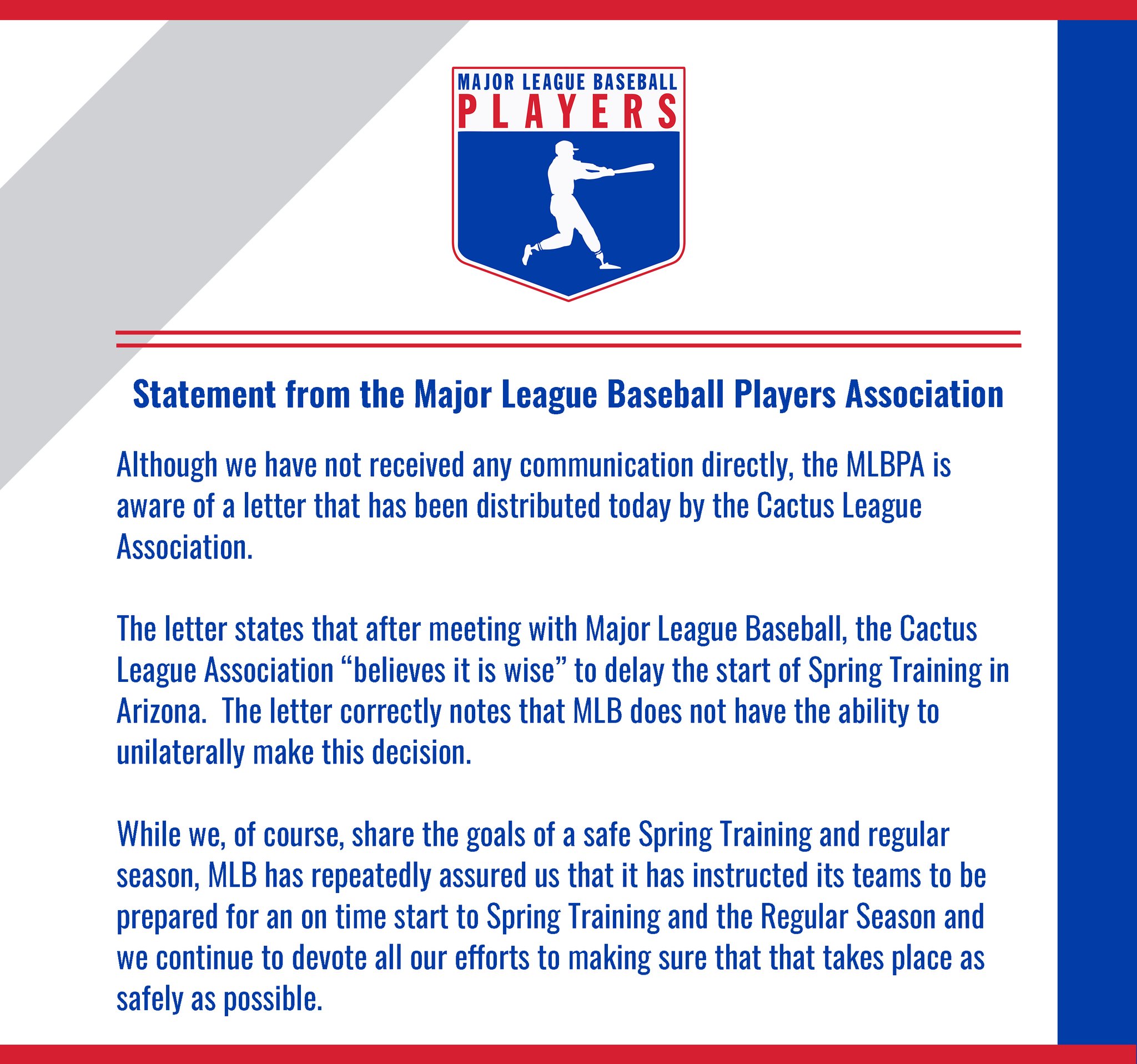