Baseball fans love to look at numbers as they speculate about the upcoming season. What if the Reds were to sign D.J. LeMahieu, who batted .364, or Marcell Ozuna, who batted .338?

The numbers that matter the most this off-season, unfortunately, are the revenue and expense projections for 2021 coming from the team’s business office. The team does not reveal those numbers, since they are not publicly traded, so we don’t know precisely what Owner Bob Castellini and his executive team have decided upon. But we can put some perspective on what is going on behind closed doors on Joe Nuxhall Way, and this may help to shape our expectations for player movement this off-season.

Under Castellini’s ownership, the team has always budgeted to break even, according to John Fay of the Enquirer. What does this mean, exactly? It means that expenditures will be just about the same as expenses. According to Fay’s article, attendance, local radio and television revenue are the chief revenue streams that fund player payroll.

An Associated Press study of baseball contracts showed the Reds’ 2020 payroll was around $147 million. Spotrac.com estimated approximately $145 million, so let’s split the difference. For the purposes of this exercise, Cincinnati’s 2020 MLB payroll was $146 million. So the 2020 expense-to-revenue budget may have looked something like this: 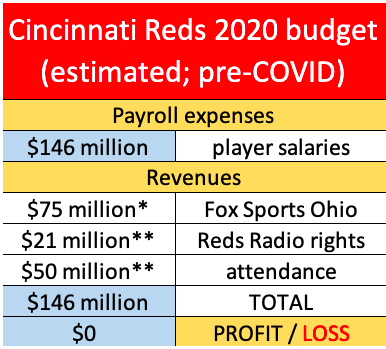 ** Estimated by article author; actual figures could not be located

But then a pandemic happened. We don’t know exactly how much the Reds dropped from 2019 in attendance revenue, but we do know that the actual revenue number for 2020 was $0 (or very close to it). One estimate indicates that meant a loss of more than $100 million in game-day revenue (tickets, parking, food, drink, souvenirs, etc.) for the Reds in 2020.

Some assumptions for a post-COVID 2020 expense-to-revenue budget: 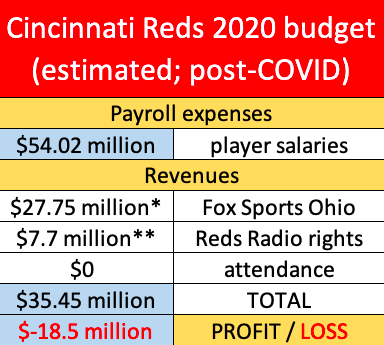 So in the revenue streams that Reds ownership reportedly uses to generate a “break-even” mark for player payroll expenses, the Reds lost somewhere around $18 million in 2020. That in no way takes into account how all other departments and aspects of a major league baseball operation were affected by the pandemic. We’re not going to try to delve into all of that.

For 2021, the team already has $116,564,880 worth of guaranteed contracts in place for the coming season, according to Spotrac (which had not accounted for Kyle Farmer’s new deal at the time this article was written). That number includes estimates for arbitration eligibles Michael Lorenzen, Jesse Winker, Tyler Mahle and Amir Garrett. It does not include salaries for other players on the roster with three years or less of service time. Nor does it account for the 11 or 12 MLB roster spots that currently don’t have guaranteed or estimated salaries (because we don’t know who those players are yet). Assume that about half of those roster spots will be players with three years or less (non-arbitration-eligible), and that about half will be veterans who have been cut loose and looking for work.

Let’s add about $10 million to account for those salaries, so the “on-the-books” salary number for 2021 is about $127 million. Let’s be optimistic and put our 2021 estimates back to what we estimated the 2020 full-season budget would look like: 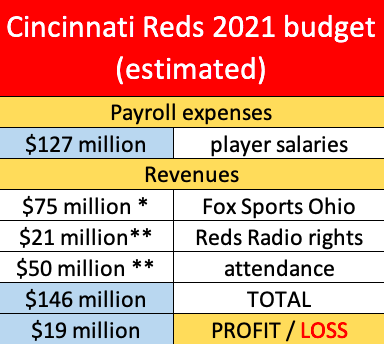 Assuming the above chart is correct, leaving the 2021 player salary budget exactly where it currently is (without any additions) would, in theory, bring the team back to break-even in player payroll expense over the past two seasons. (Estimated $18.5-million loss in 2020, estimated $19 million profit in 2021.) And assuming that attendance will just magically return to pre-COVID levels is foolish. It’s probably going to take some time.

The point of all of this: The Castellini family runs the Cincinnati Reds like a business. There is absolutely nothing wrong with that. In fact, it’s the responsible thing to do. Presuming the above premise of budgeting for break-even, revenue to cover any additional payroll expense for the 2021 season will likely come from some other funding source than listed above (maybe Castellini himself) — atypical of how the Reds operate, according to Fay.

So, with all of this in mind, know that

Perhaps that explains the seemingly non-sensical rumors that Cincinnati is “working hard” to trade Sonny Gray. Perhaps, because of a scenario similar to what we have posed above, Castellini has told General Manager Nick Krall that in order to sign a shortstop to a $10-plus-million deal, a similar amount must still be cleared from the current payroll. If your number one objective is trying to win the World Series, trading Sonny Gray does not compute. But there are other factors in play, unfortunately.

In conclusion, I’m absolutely not trying to assert that every budgetary estimate above is 100 percent accurate. But it is built from information from people who are in a position to know how things are done. The point of this piece was to construct a scenario that is likely to illustrate what financial considerations the front office and ownership are facing. And, also to point out that if the Reds are to make significant upgrades to the roster, the owner himself may have to bear some of the cost directly. That’s not something that any business owner ever does lightly.