Trevor Bauer will be a free agent when the postseason ends. So will Freddy Galvis and Anthony DeSclafani. There’s also a chance that Nick Castellanos could be a free agent, too, if he exercises his opt-out clause – though we don’t think that he will do that. Teams can offer players that will be free agents a qualifying offer as long as the player has never received one in the past and the player was with the organization for the full season.

A qualifying offer is a 1-year deal that is worth the average salary of the top 125 salaries for the following season. If the player accepts the deal, the team will of course honor that contract. If the player declines it, the organization will get a draft pick. Where that pick falls depends on the team that signs the player and how large of a contract the player eventually signs. You can read more about all of the rules for that here.

Evan Drellich of The Athletic reported this morning that the qualifying offer this offseason will be $18.9M. That’s up from $17.8M last year.

With all due respect to both Freddy Galvis and Anthony DeSclafani – they aren’t going to get qualifying offers. Both of them will land big league jobs in free agency – be that with the Reds or someone else, but they won’t be getting the kind of offers that would warrant Cincinnati making them a qualifying offer.

We know that Trevor Bauer is going to hit free agency. He, unlike Nick Castellanos, does not have money and years sitting on the table with a current contract that he needs to weigh the options of “can I get a better deal this year in free agency than what’s already sitting here for me” – his contract is up. Bauer has spent the playoffs making comments like “(insert team in the playoffs) looks good but could use some more starting pitching” – including this fun exchange from yesterday: 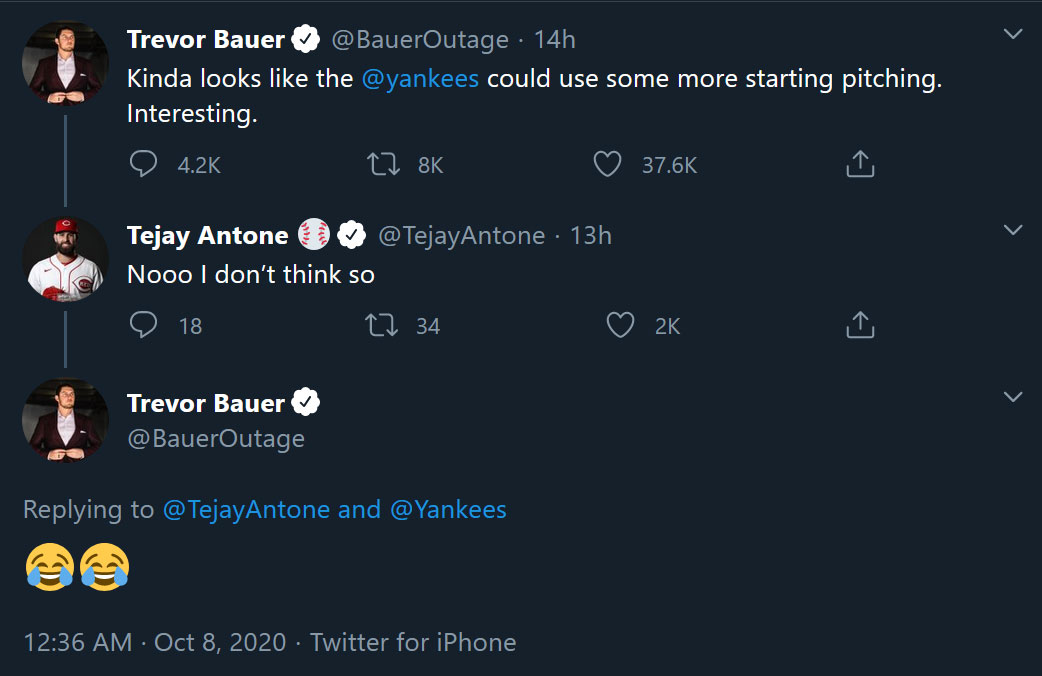 He’s also mentioned several times in response to fan comments about the Reds that none of this means he wouldn’t come back to Cincinnati. Of course, it’s his right to go out and see what he can get – he’s earned that right and he’s earned every penny he’ll get paid.

The voting for the 2020 National League Cy Young Award has already taken place, but we won’t know the results of that voting until after the playoffs. But there seems to be a pretty good chance that Trevor Bauer will have his name engraved onto the award after the season he put up for the Cincinnati Reds – which would make him the first winner in the history of the franchise. Bauer led the league in ERA, complete games, WHIP, and batting average against, while finishing in the top five in nearly any other category you can think of. He put the team on his back and carried them throughout the season on days when he took the mound.

Bauer has noted in the past he only wants to sign 1-year deals. There’s a lot of reasons behind that, but sometimes things change, too. We’re all going to have to wait and see how that plays out for Bauer this offseason. What does seem pretty clear, though, is that he’s worth every last bit of a qualifying offer and the team would be thrilled if he accepted one. It won’t be offered yet, because it can’t be – but when the time comes, expect Cincinnati to make that offer.

With Nick Castellanos things get a bit more complicated. He’s got an opt-out clause both this offseason and next offseason. The outfielder will have three years and $48,000,000 remaining on his deal if he sticks around after this offseason. For him to choose free agency he would have to be comfortable that he can get a better deal than that.

That’s a hard sell given that he hit .225/.298/.486 on the year in his 60 games played. That line is a big decline from the .289/.337/.525 line he had entering free agency last year – in fact, it’s the worst season he’s had by OPS+ since 2015. When you toss in the fact that teams are claiming they have less money than ever to spend because they couldn’t have fans in the stands and it just seems all the more likely that waiting another year to see what happens both on the field for Castellanos, and what happens in the world regarding the on-going pandemic and what that means for revenues around the league makes sense.

All of that said, there are always reasons beyond money for players to want out. While there’s been no public reasons to think Nick Castellanos doesn’t want to be in Cincinnati, if there is a reason he doesn’t want to be, he could take the opportunity to go elsewhere. If he were to opt out, the Reds could also extend him a qualifying offer at $18.9M. Like much of the rest of the team, the underlying numbers suggest that he should hit better than he did in 2020 – but given the season he just had, the Reds would basically be offering him a significant raise for 2021 (he’s due $14,000,000 from the Reds for the upcoming season) while seeing his numbers decline.