The Pittsburgh Pirates have now won 23 of the last 32 games they have played against the Cincinnati Reds after tonight’s 9-6 victory. Keep in mind that Pittsburgh has finished fourth or fifth in the National League Central Division in each of the past three seasons. For the Reds, a too-little-too-late comeback attempt was futile and left their fans, the players and the coaches feeling this way:

Cincinnati scored single runs in each of the final three innings to pull within three runs, but a 9-0 deficit after an inning and a half was too much to overcome for the home team.

We’re still looking for indications and signs that this is a good team, and so far that is definitely not the case. Small mistakes have a negative cumulative effect for a bad team, and that was the case tonight. Jesse Winker failed to hustle from third to home on a ground ball by Freddy Galvis, and the result was that Nick Senzel was tagged out at second base a split-second before Winker crossed the plate. Replay showed Winker in a jog. Had he run hard, he would have scored because the play at second was a tag play and not a force. Later in the game, both Josh VanMeter in the eighth inning and Eugenio Suarez in the ninth swung at pitches way outside the strike zone for strikeouts. Both times, had the batter not swung, it would have resulted in a base on balls and a promising rally would have been prolonged.

Senzel batted 3-for-4, and each of his hits (a single, double and two-run homer) drove in runs. Winker raised his batting average to .347 and his OPS to 1.059 with a 2-for-4 day at the plate. Winker should be somewhere in the top three in the batting order.

It’s probably not a surprise if you watched the game, but Anthony DeSclafani allowed seven batted balls with an exit velocity of 100 mph or more in his two innings: 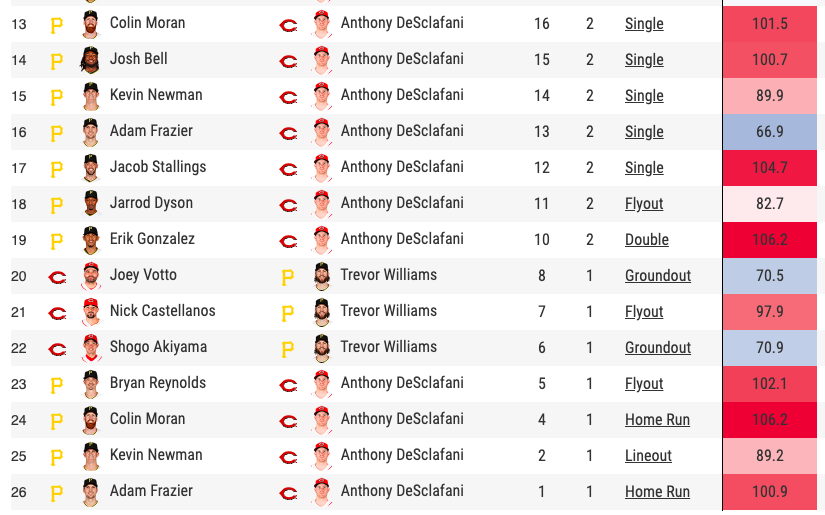 DeSclafani’s problem has always been left-handed hitters. .821 OPS vs. .650 against RHs. Pirates have 4 left-handed hitters and 2 switch-hitters in the lineup. And it’s gotten ugly early. 7 runs, 9 hits in 1 1/3 innings so far. And the bases are loaded. #Reds

Certainly those numbers are telling, but today DeSclafani could not get the ball down in the strike zone, and he got hammered, to which the “exit velo” numbers above will attest.

Cody Reed and Michael Lorenzen combined for six innings of two-hit, one-walk relief work with five strikeouts. Hopefully, it is the beginning of a turnaround in performance for both.

Cincinnati’s defense has been largely below average for most of the season so far, so it was certainly nice to see Shogo Akiyama show that he knows what to do with the glove …