Sonny Gray and the Cincinnati Reds fell behind 2-0 early, but it didn’t spell doom on this night. Nick Castellanos and Joey Votto each homered to help the Reds win their third consecutive game. The Reds have gone from 2-5 to 5-5 in a span of less than 36 hours. 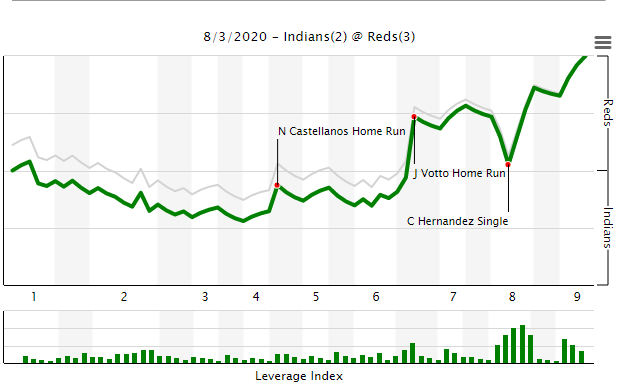 According to Fangraphs WPA statistic (winning percentage added), the most important play of the game was Joey Votto’s 2-run home run with 0 outs in the 6th inning, giving the Reds a 3-2 lead. That play increased the Reds probability of winning by 26.6% (from 46.9% to 73.5%).

Joey Votto crushed a 2-run home run to give the Reds a 3-2 lead in the 6th. Votto is now tied with Tony Perez for third on the Reds all-time home run list.

The NL player of the week Nick Castellanos just continues to rake. He now has 5 home runs and a 1.374 OPS through his first 10 games with the Reds.

Sonny has now made 36 straight starts without allowing more than 6 hits, the longest streak in Major League history!#TakeTheCentral pic.twitter.com/htcCDOCVsM

Michael Lorenzen pitched a perfect 7th inning. That is very encouraging. Nate Jones also had a scoreless 8th. Jones has looked pretty good so far with some nasty stuff.

You know, there's a lot of people on this here website wondering why Nate Jones is pitching in the 8th inning.

Tucker Barnhart did a remarkable job behind the plate throwing out both Francisco Lindor and Cesar Hernandez on a pitches in the dirt. The latter came in a big spot with the Reds up 3-2 and runners on 1st and 2nd with 1 out.

Eugenio Suarez and Jesse Winker continued their ice colds starts to 2020. They are a combined 5 for 58 at the plate.

Christian Colon went 0 for 3 as the Reds DH (?) tonight. Nick Senzel was scratched after jamming his left hand yesterday on a slide. Colon DH-ing and Senzel being hurt are both very bad.

I wish every game started at 8:40. Anyone who has little kids and is a night owl knows what I am talking about.

I am forced to watch the Indians broadcast since I live in Cleveland. I had no idea that Shogo Akiyama tried to steal on the Votto home run until I saw the Reds broadcast highlight later. That’s one of those weird 2020 things with no road broadcasters at the park.