In a season in which we did not expect rookies to be key figures for the Cincinnati Reds, they were the bright spots on this evening.

Catcher Tyler Stephenson and righthander Tejay Antone both made their major league debuts in notable fashions. Unfortunately, that happened because the Reds got behind very early, 6-0, after two innings, as the Chicago Cubs rode that early margin and held on for dear life for an eventual 8-7 win. The loss dropped Cincinnati to a 1-3 record in their first four games.

Antone entered the game in the second inning in relief of Wade Miley, who was battered in his first Reds start. Antone pitched 4.1 innings, allowing only one hit — unfortunately a home run to Anthony Rizzo. Facing an 8-1 deficit, Reds manager David Bell brought Stephenson on to catch to give Curt Casali a bit of a breather. Stephenson responded with a 415-foot home run to centerfield, a line-drive single to left and a ninth-inning walk to go 2-for-2 in his big league debut.

The Reds had a chance to get back in the game in a big way in the bottom of the seventh. Stephenson’s solo home run and Nick Castellanos’ RBI single brought them within five at 8-3, but Josh VanMeter struck out with the bases loaded against Cubs reliever Ryan Tepera.

Another opportunity presented itself in the bottom of the eighth. With two runners in scoring position and two out, Joey Votto dropped a hit into right field against righthander James Norwood to bring the home team within three at 8-5. But Eugenio Suarez grounded out to remain hitless on the season and end the inning.

Cubs stopper Craig Kimbrel walked four batters and hit one in the bottom of the ninth, allowing the Reds to score two runs to pull within 8-7 without benefit of a hit. With one out and the bases loaded, Cubs Manager David Ross pulled Kimbrel in favor of the former Milwaukee Brewer, Jeremy Jeffress. Phillip Ervin struck out, bringing Votto up as the last hope. As he has done multiple times in the first four games, Votto hit a line shot, but unfortunately, it was directly at centerfielder Albert Almora Jr. for the final out.

Tyler Stephenson is off to a fast start with the #Reds. pic.twitter.com/YKOpF2hgd1

Other than Stephenson, Votto was the only other Red with two hits. He went 2-for-5 with two RBIs to improve his batting average to .412. Nobody else among the team’s hitters has yet gone on a hot streak through the opening four games.

You may not have known much about Miley’s repertoire before seeing him pitch tonight, but this graph of tonight’s effort from Statcast paints a very convincing picture. He’s going to rely on location because he doesn’t have the velocity, and he had absolutely no location tonight whatsoever. 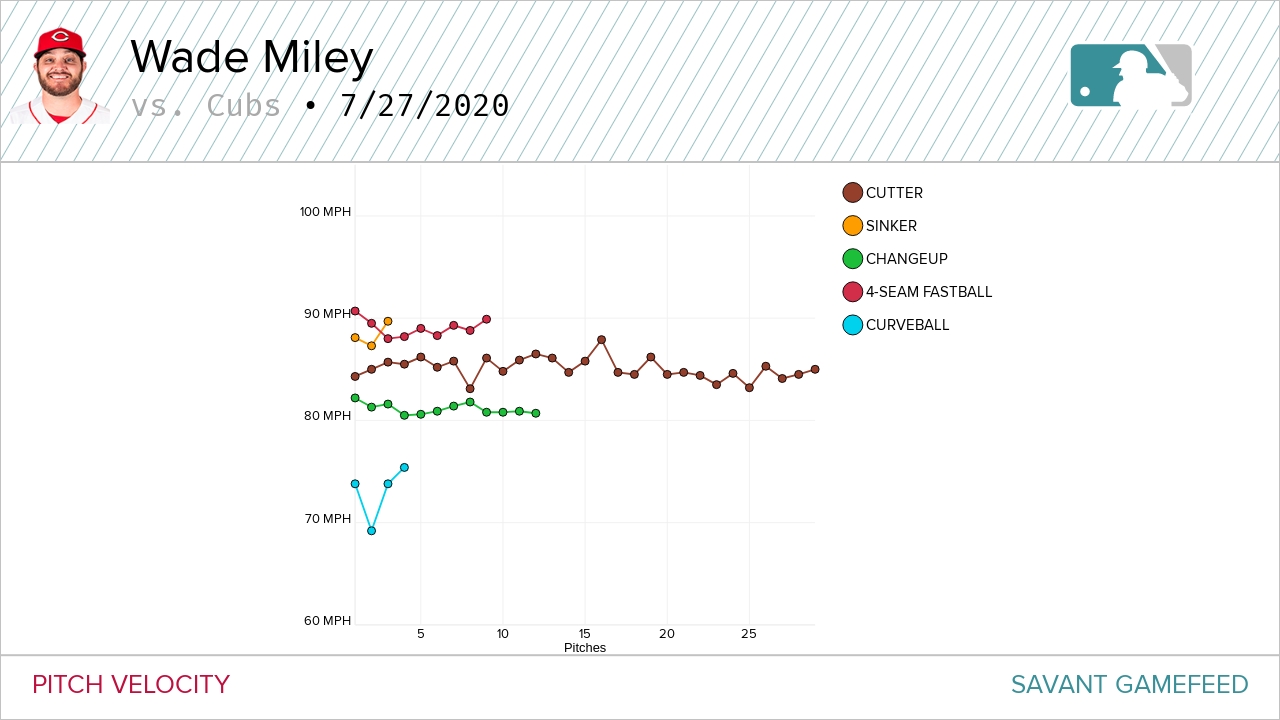 On the other hand, here is Antone’s velocity chart: 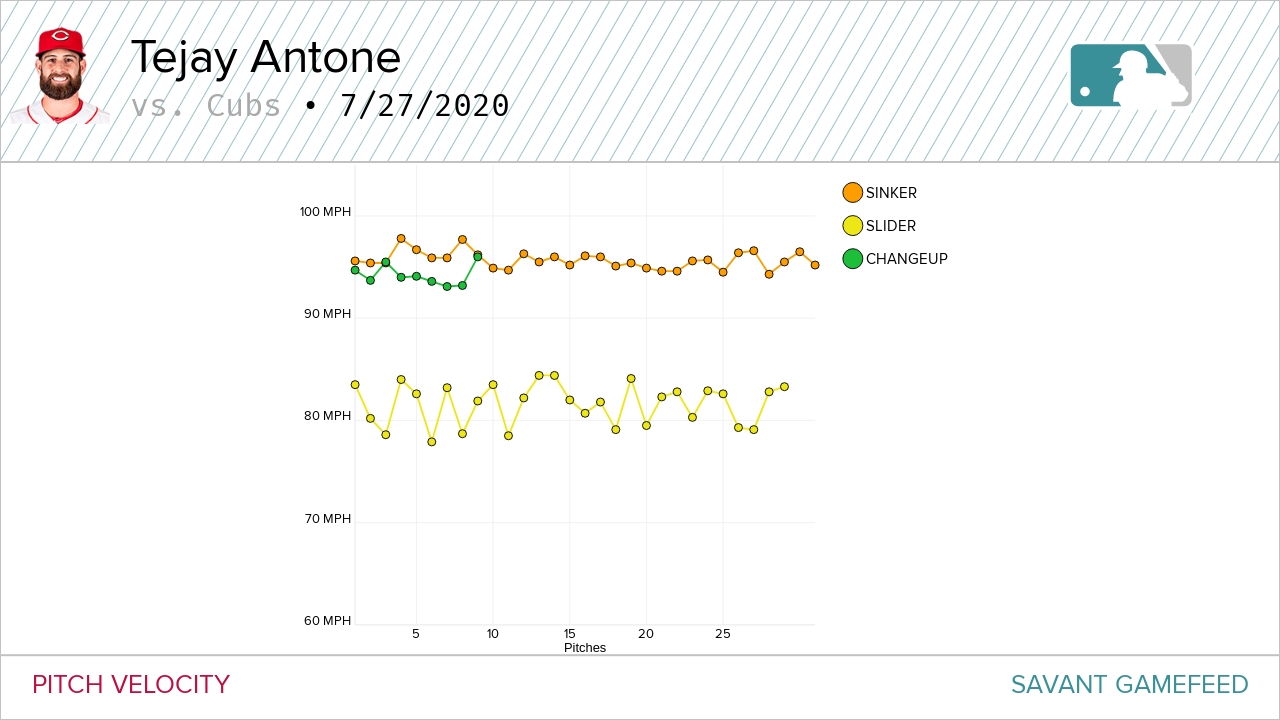 Antone made a very compelling case that he should stay with the major league team and get some more chances. If he continues to pitch this way, he suddenly becomes one of David Bell’s short list of pitchers to be relied upon, rather than a player who moves back and forth between Cincinnati and Mason. By allowing Antone to pitch 4.1 innings tonight, Bell might have been stretching him out for a starting assignment — either for Miley, or for Anthony DeSclafani if the latter misses more than one start.

Your “fan cutout” can be in the seats at Great American Ball Park! Cost is $75. More at Reds.com.

Two pitchers waived by Cincinnati both claimed by Miami Marlins …

RHP Justin Shafer and LHP Josh D. Smith have been claimed off waivers by the Marlins. Both were designated for assignment on Friday. #Reds pic.twitter.com/ftRWsLRRfo