The Reds 2020 lineup has provided fans with a level of excitement and optimism that we have not seen in quite some time. Suarez-Castellanos-Moustakas feels like a dangerous trio that should strike fear in the opposition. Suarez and Castellanos are both really good hitters, but a large portion of their offensive value comes from their ability to destroy LHP. Suarez has a career .901 OPS vs LHP, while Castellanos is at .891.  However in contrast, Suarez has a career .789 OPS vs RHP, while Castellanos is just at .768 (NL average in 2019 was .753).  Suarez did OPS .911 last year vs RHP, which was due to his major surge of hitting 38 home runs vs RHP. If his power comes back down to earth some, Suarez probably reverts back to a good-not-great hitter vs RHP.

Mike Moustakas is a good player, but he doesn’t lack the drastic splits you might think a LHB would have against a RHP. Moustakas only has a career .764 OPS vs RHP, although he was up to .831 last year. Even an .831 OPS doesn’t stack up against the Reds biggest competition. Over the past 3 years, the Brewers have Christian Yelich, who has a .992 OPS vs RHP. The Cubs have Anthony Rizzo at .922, Kris Bryant at .864 and Kyle Schwarber at .861. The Cardinals have Paul Goldschmidt at .878. Bryan Reynolds had an OPS of .931 vs RHP is his rookie season last year for the Pirates, while Josh Bell has a .865 OPS vs RHP over the last 3 years.

Joey Votto is one of the best hitters in MLB history against RHP. Reds fans should feel confident that Votto will be able to contribute this season with a high OBP, but it seems unrealistic to expect him to get back to his previous power numbers which contributed to being an offensive superstar. 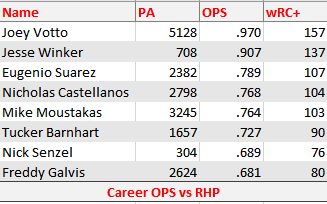 The good news for the Reds is that they have one of the best hitters in baseball against right handed pitchers: Jesse Winker. He has a career .907 OPS against RHP, which is tied with Mookie Betts for the 17th best in the MLB of anyone with 700+ PA since 2017. His .907 OPS is better than Jose Altuve, Ronald Acuna, Paul Goldschmidt, Alex Bregman, George Springer, Nolan Arenado, Kris Bryant and Francisco Lindor.

According to Roster Resource, 17 of the projected 20 SP on the Reds NL Central rivals are RHP (and two of those are on the Pirates). That is why Jesse Winker might be as important as any Reds player in 2020. The Reds need Winker to stay healthy to keep their lineup strong most nights in the NL Central.