Shogo Akiyama’s one-out single in the bottom of the 10th inning scored Steady Freddy Galvis from third base with the winning run, sending a sim Great American Ball Park crowd of 30,804 into a sim frenzy as the Cincinnati Reds (51-49) defeated the New York Mets (44-56) by a score of 4-3.

Galvis led off the bottom of the 10th with a single, his fourth hit of the game. Winning Redleg Nation commenter/manager Mark Moore then flashed the steal sign, which Galvis executed successfully. Pinch-hitter Curt Casali made an out, but successfully advanced Galvis to third base on a ground ball. With Galvis at third, he scored easily on the game-winning hit by Akiyama.

New York took the early first-inning 2-0 lead against Luis Castillo, but the sim Reds tied it with single runs in the third and fifth on sacrifice flies by Eugenio Suarez and Mark Payton. The Mets recaptured the lead in the top of the sixth on three two-out singles, but Cincinnati tied it in the bottom of the eighth off Mets flamethrower Dellin Betances on a Joey Votto leadoff single, a Tyler Stephenson walk and a Galvis RBI single.

Four sim Reds relievers were keys to the victory, holding the Metropolitans hitless and scoreless over their final four at-bats.

The Reds won despite leaving 13 runners on base. Along with their 11 hits, they received eight walks from Mets pitchers.

Nick Castellanos was injured while grounding out in the second inning, and will miss the next three games. 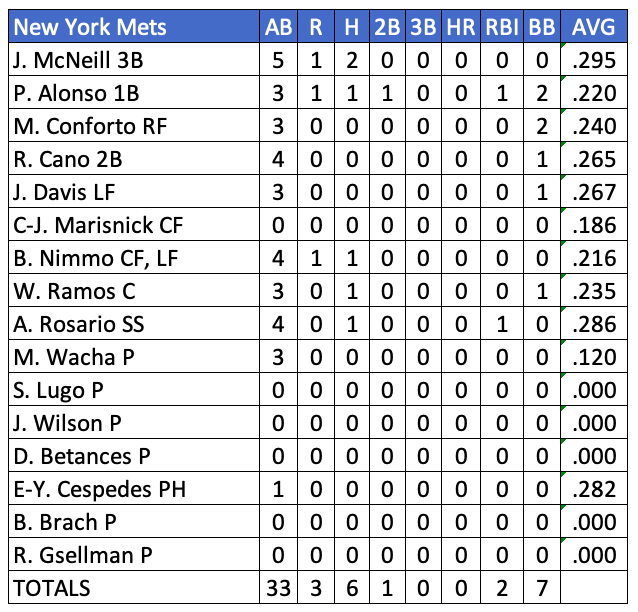 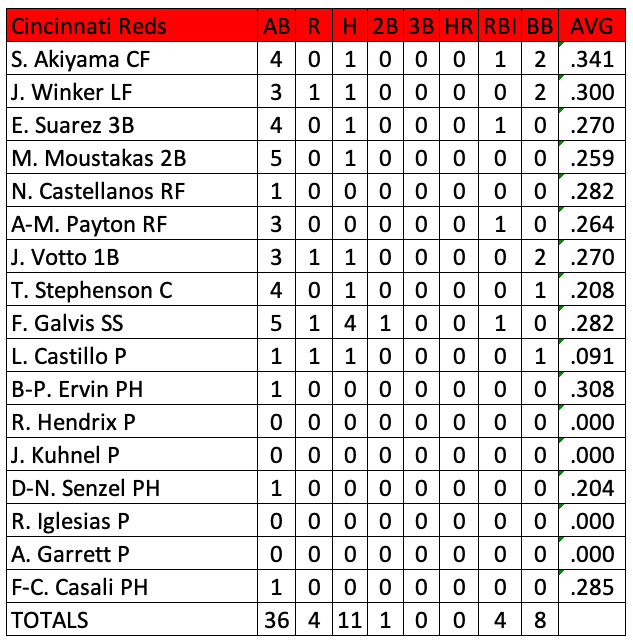 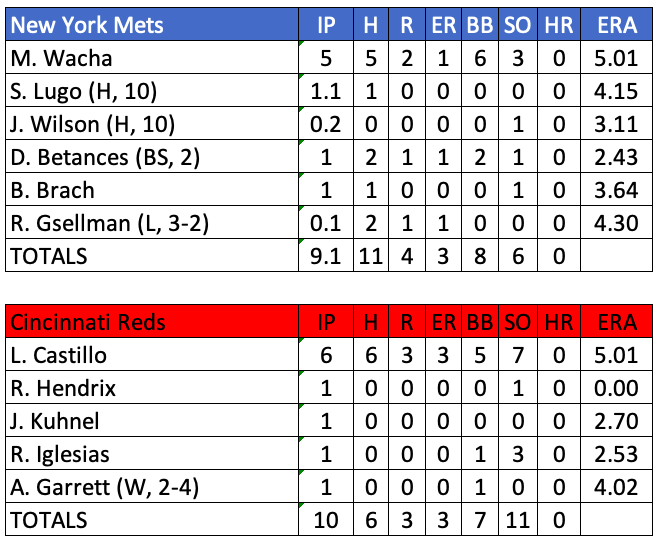 Cincinnati’s win allowed them to gain on NL Central co-leaders Milwaukee and St. Louis, who both lost.

Of course, today marks the end of the day-by-day simulations by Strat-O-Matic of the 162-game 2020 season. Since the 60-game regular season begins for real later this week, Strat-O-Matic will simulate the remaining games of the sim season Wednesday. We’ll post a wrapup article here at Redleg Nation when those results become available.

The Redleg Nation commenter/managers have put this team in a position where anything is possible — two games out of first place with 62 sim games left. And, just 2.5 games out of the second wild-card berth.

If the full-sim-season-to-date statistics become available any time later today, I will add them here. It would be interesting to compare the 100-game and the 162-game numbers.

My Strat-O-Matic contact told me in email today that they check the Redleg Nation articles just about daily, and they were excited to see the amount of comments. “Your readers are certainly engaged in all of this,” he wrote.

He also said they are going to sim the 60-game season sometime soon, and he will send me the results when they are available.

I love writing, I love the Reds, and I love writing about the Reds. This sim series has been one of those situations in life which you probably have heard of or even experienced: When you’re doing work you love, it’s not like work at all.

When spring training was canceled and it was clear there was not going to be a regular season for some time if at all, I noted that Strat-O-Matic announced they were going to do a day-by-day simulation of the 2020 season.

I had seen Doug Gray’s tweets about how difficult it was for him to generate income from his websites via the usual method of digital ad impressions. With no baseball being played, people were visiting the websites much less. I pitched him on the idea of daily stories on these sim games in hopes it might help draw more people in. Doug has treated his writers very well, and I wanted to do what I could to return the favor.

We had no idea if it would catch on among the Redleg Nation readership, but after a couple of sim game stories were posted, Strat-O-Matic — having seen the articles here at Redleg Nation — reached out and asked if we needed anything from them to enhance the articles. We replied and asked if our readers could in effect be managers and submit a lineup for each day’s game. They said yes, and things began to take off.

Each day during this process, I would check my email over and over awaiting the daily results. Yeah, I know, what a geek. 🙂 Along with great enjoyment for me, I am so glad that this endeavor has provided some fun and distraction for some of our Redleg Nation readers. We’ve had a core of about 10 to 12 readers who became involved on a daily basis. I feel a true kindred spirit with these regulars, and I’d like to specifically thank BK, Don, Gonzo Reds, James Owens, Jon “Sparky” Davis, Mark Moore, Melvin and Redsfan4life for your avid and loyal participation. It’s my belief that we learned about many of the issues that real managers have to consider when they build a lineup and that the effort was truly a team effort, with everyone supporting one another. Everyone who sat in the commenter/manager “seat” for more than one game recorded a victory for his personal mental trophy case.

When this started, I never thought for one second that it would go for 100 games. It’s been a joy and a pleasure, gentlemen. And one more thanks to Doug Gray for agreeing to give this idea a try.

Now … let’s get things going for real, and hopefully enjoy a season when the Reds are in the race all the way!