Wade Miley pitched scoreless baseball for his second consecutive start, leading the Cincinnati Reds (49-47) to a 5-4 victory over the Pittsburgh Pirates (37-59) at Great American Ball Park.

The victorious outing stretched Miley’s scoreless innings streak to 11, after he pitched five scoreless innings in a victory over Cleveland on Tuesday. Miley has the best won-loss percentage among sim Reds starters at .727.

The sim Reds got the scoring going early in the first inning with a two-run single by Mark Payton with the bases loaded. Curt Casali walked with the bases loaded in the third to make it 3-0, and Shogo Akiyama and Eugenio Suarez hit solo homers in the fourth and sixth innings, respectfully to give the home team a 5-0 lead.

However, things got a bit dicey in the eighth inning. Sonny Gray, making his second relief appearance, was ineffective. He allowed four hits, a walk and four runs before Raisel Iglesias got the final out in the eighth. In the ninth, Iglesias allowed two of the first three batters to reach, but retired Josh Bell and Jose Osuna without any runs scoring to preserve the one-run victory.

Akiyama and Nick Castellanos had two hits apiece to lead the sim Reds attack that was limited to only six hits, but benefitted from drawing 11 walks from Pirates pitching. 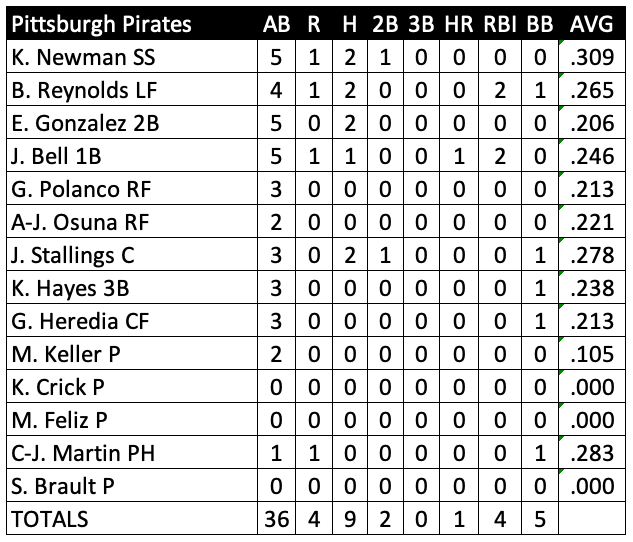 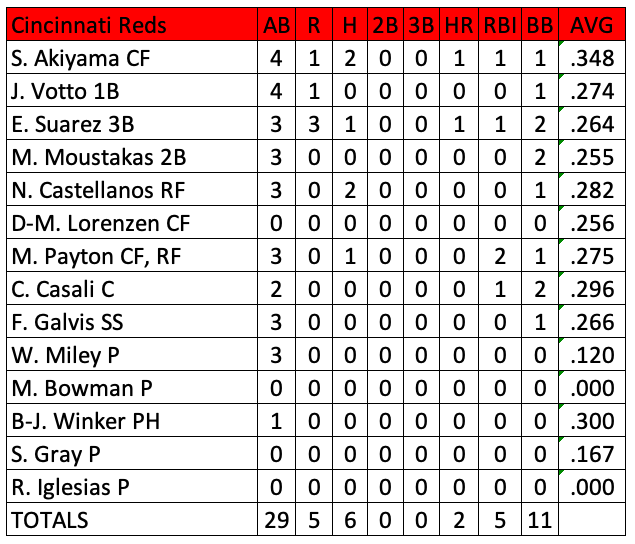 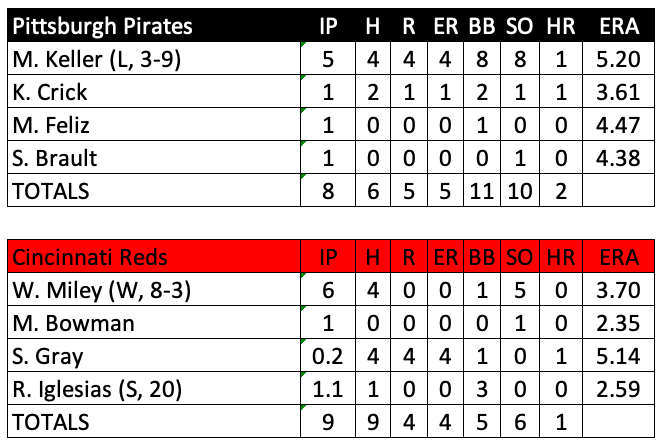 Milwaukee defeated Colorado today while St. Louis fell to Tampa Bay, breaking the virtual tie for first place in the NL Central between the teams. Cincinnati and Chicago both won to keep pace with the Brew Crew.

The 2020 schedule has the Reds and all of the sim league off for four days for the sim All-Star Game break. Akiyama will represent the Reds in that sim game. Then on Friday, the Reds travel to Wrigley Field for the first of a very important three-game series against the Cubs. Don, the Redleg Nation winning commenter/manager today, can choose any starting pitcher for Cincinnati because all will have had at least four days rest. The Friday starter for Chicago has not yet been announced by Strat-O-Matic, but we will update here when that is available.

Today’s winning Redleg Nation commenter/manager Don will have priority for Friday’s lineup. Have fun with this! If you have any questions, please post them in the comment string below. Here are the “managerial records” of our Redleg Nation participants to date: