Steady Freddy Galvis’ two-out, three-run home run in the top of the eighth inning brought the Cincinnati Reds (46-45) from behind and sparked a 4-3 victory and a three-game series sweep of the Arizona Diamondbacks (43-47) at Chase Field in Phoenix.

Today was the second straight day that the sim Reds had a big rally in the eighth. Trailing 3-1, Eugenio Suarez drew a leadoff walk from reliever Kevin Ginkel, and one out later Nick Castellanos walked. After Mike Moustakas lined out, Galvis launched his ninth of the year.

After that, Reds pitchers Michael Lorenzen and Raisel Iglesias put down Arizona in one-two-three fashion in both the eighth and ninth innings to seal the three-game sweep. After Iglesias struck out Starling Marte for the final out, the sim Reds streamed out of the dugout, formed a social-distancing circle around the pitching mound, and started to chant “Melvin! Melvin! Melvin!” as their victorious Redleg Nation commenter/manager dashed to the center of the circle and did a “raise-the-roof” gesture with his hands.

Lorenzen was credited with the victory thanks to his two shutout innings, after which he was moved to center for defensive purposes in the bottom of the ninth.

After starting the seven-game west coast road trip 0-3, the sim Reds turned things around dramatically by winning the final four and finishing 4-3. 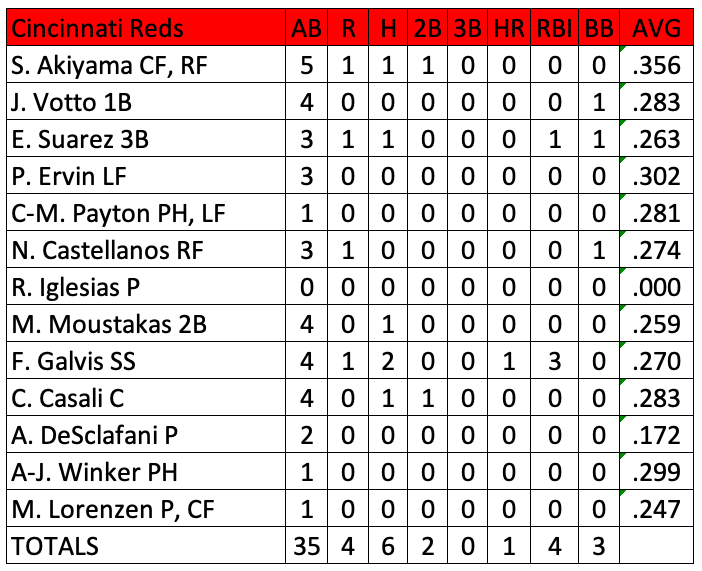 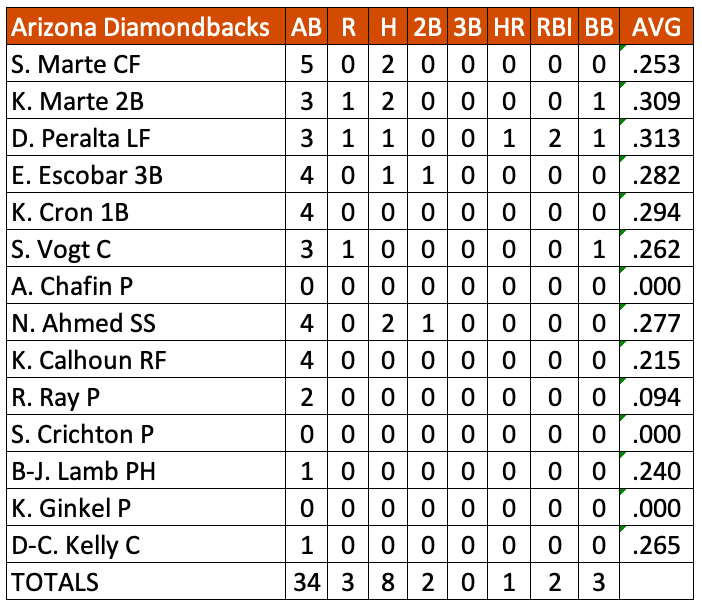 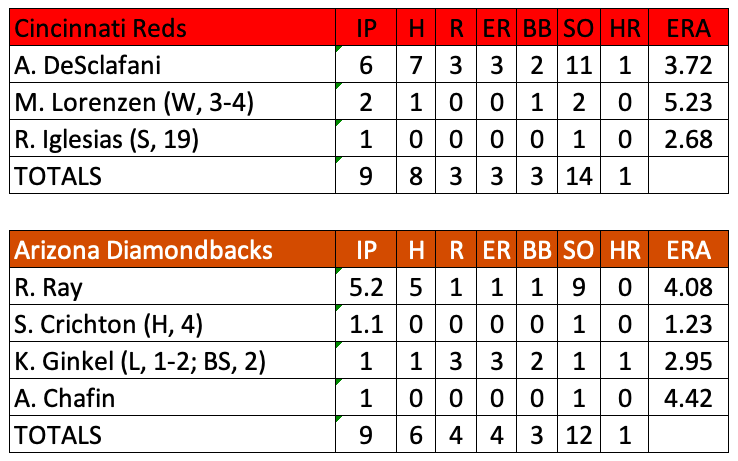 The 2020 schedule has the Reds off Monday, and then returning to Great American Ball Park Tuesday to host the Cleveland Indians. Sonny Gray or Wade Miley will pitch for the sim Reds, while right-hander Carlos Carrasco will start for Cleveland.

While there have not been any Cincinnati Reds players opt out of the 2020 season to this point, and none of them have made statements about thinking about it moving forward, others around baseball are doing that. The biggest name so far to opt out of the 2020 season is Los Angeles Dodgres pitcher David Price, but a handful of others – including former Red Mike Leake has also opted out.

Andrew Miller, who was on the MLBPA’s executive committee during negotiations, noted earlier today that there’s still come doubt about the season as a whole.

Andrew Miller: "I think there's still some doubt that we're going to have a season now. By no means is this a slam dunk. We're trying, we're going to give it our best effort, but for me to sit here and say 100 percent would be a lie."

Sean Doolittle, Washington Nationals reliever spoke about how he is currently feeling in camp, and how the idea of having fans in the stands as some teams are talking about at some point this season.

Here it is. The question was about some owners recently suggesting that there could be fans in parks later this season. Sean Doolittle's answer touched on a lot more: pic.twitter.com/M1eFONQpPZ

And at least as far as we know to this point, it would seem the biggest name we have had show up as COVID-19 positive is Atlanta Braves All-Star first baseman Freddie Freeman. And he’s also very symptomatic, with his wife detailing that he’s had body aches, headaches, chills, and a high fever. She also noted that they aren’t even sure how he got it given that they haven’t really gone out anywhere or seen anyone.

While we aren’t having games, teams around Major League Baseball are trying to give the fans something baseball related to enjoy during this ramp-up period before the season begins. The Reds are broadcasting their practices at Great American Ballpark every day on their social media. Hours and hours of batting practice, live batting practice, outfield drills, bullpen sessions – they’ve got multiple cameras set up. So if you are itching to watch anything and everything, or just have a few minutes to kill – this is your chance. Today we were given the treat of watching Luis Castillo and Michael Lorenzen throw live batting practice to Eugenio Suarez, Joey Votto, Phillip Ervin, and Shogo Akiyama (could have been someone else I’m forgetting at this point).

Since Melvin was the victorious Redleg Nation commenter/manager today, he has priority for Sunday’s lineup. Have fun with this! If you have any questions, please post them in the comment string below. Here are the “managerial records” of our Redleg Nation participants to date: