A scoreless game through seven innings became a laugher when the Cincinnati Reds (45-45) scored nine runs in the top of the eighth to defeat the Arizona Diamondbacks (43-46) by a 9-2 score at Chase Field in Phoenix.

The sim Reds saved their Fourth of July fireworks until their eighth at-bat. Arizona starter and loser Madison Bumgarner, who had limited Cincinnati to four hits through seventh innings, had the wheels fall off. Nick Senzel led off the inning pinch-hitting for starter and winner Trevor Bauer by drawing a walk. Shogo Akiyama grounded back to Bumgarner, who threw it away at first base to move Senzel to third and Akiyama to second. Joey Votto doubled them both home to give the sim Reds a 2-0 lead, which was the end of the line for Bumgarner.

Cincinnati then unloaded on the Arizona bullpen. Junior Guerra immediately surrendered a run-scoring double to Eugenio Suarez, later a run-scoring double to Phillip Ervin, then departed with the bases loaded. Steady Freddy Galvis greeted reliever Merrill Kelly with a grand slam homer, and Akiyama rounded out the scoring with a solo shot.

Bauer had his best stuff on this day. In his seven innings, he allowed only one hit while striking out 10 and walking none. Bauer lost his no-hit bid when Starling Marte singled with one out in the sixth inning. His nine wins top the sim Reds staff.

“Everything felt great,” Strat-O-Matic quoted Bauer as saying. “I had a good fastball. I felt I could throw it by everybody tonight.”

Lucas Sims was roughed up a bit in relief, but a nine-run lead meant there were no worries for winning Redleg Nation commenter/manager Melvin, who recorded his third straight victory.

Curt Casali reached base four times on two hits and two walks. He scored immediately ahead of Galvis on the grand slam.

The victory pulled the sim Reds within one game of the Cubs and Cardinals, who are tied for second. The first-place Brewers defeated St. Louis, and the Cubs fell to Tampa Bay. Cincinnati remains four games behind first-place Milwaukee. 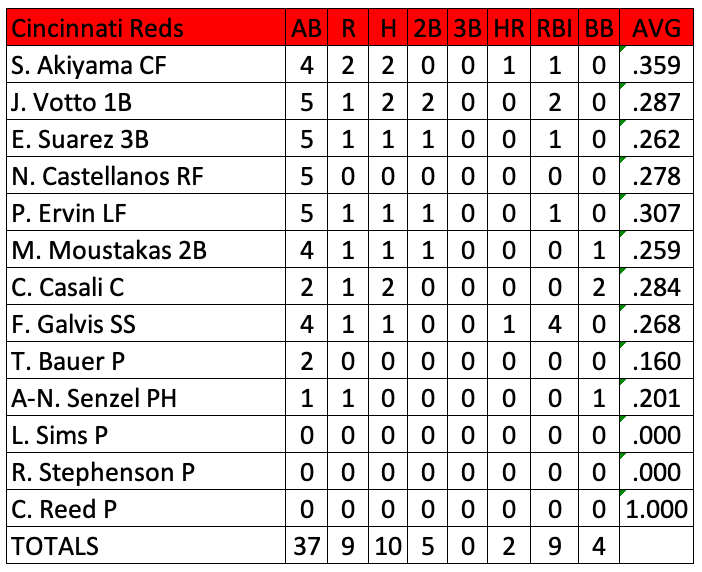 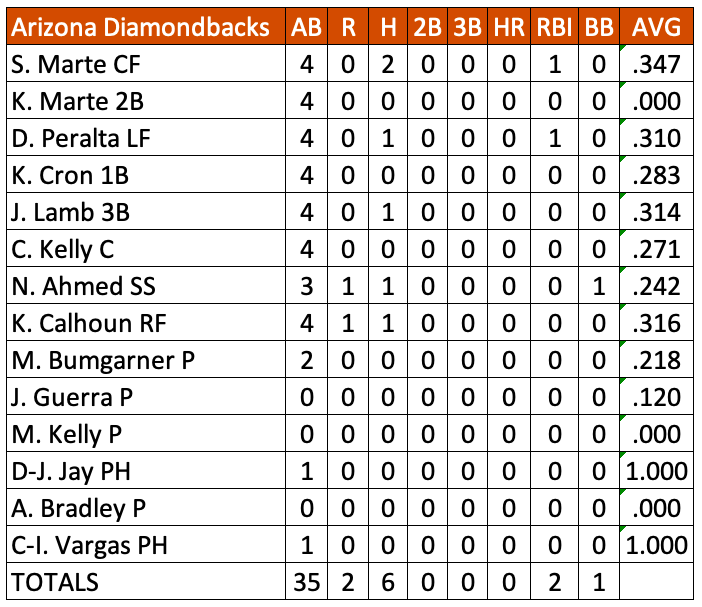 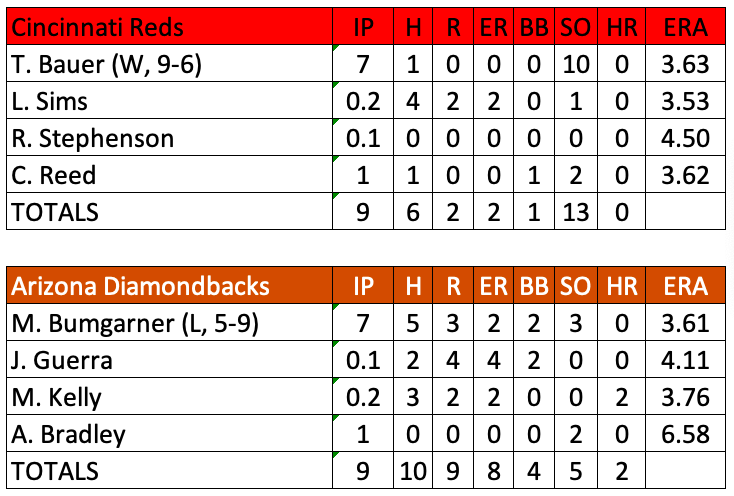 The 2020 schedule has the Reds again at Chase Field in Phoenix Sunday going for the sweep of the three-game series against the Arizona Diamondbacks. Anthony DeSclafani pitches for the sim Reds, while left-hander Robbie Ray will start for the D-backs.

Since Melvin was the victorious Redleg Nation commenter/manager today, he has priority for Sunday’s lineup. Have fun with this! If you have any questions, please post them in the comment string below. Here are the “managerial records” of our Redleg Nation participants to date: