Well, we’ve made it. After 14 weeks of postponed baseball, summer camp officially started and our national pastime is on the horizon. Acknowledging that actual baseball events will be happening in the coming weeks and that Game 81 of the simulated season helpfully fell to this week, I will be stopping these simulations here. Say hello to your 2020 Simulated NL Central Champions, the Cincinnati Reds! It’s a bit of a hollow victory, but hey, it’s all we’ve got.

The Game (8-4 loss): No one ever said the Reds would win the last one, so it’s a good thing they locked up the title last week. But at least the end of the road was interesting. Luis Castillo started this season with a 14-inning complete game, and he ended it with his first career home run, a two-run shot in the second that put the Reds up one. Castillo gave back the lead in the very next frame but kept the score at 5-4 until the eighth. Then, Castillo loaded the bases to start the inning and was relieved by Michael Lorenzen. All three inherited runners scored.

Outside of Castillo’s home run, the Reds didn’t do too much at the plate. Shogo Akiyama tripled and Joey Votto tried to steal his ninth base, but was thrown out. Eugenio Suarez and Mike Moustakas added two-hit days, but it was mostly a quiet finish for the Reds bats. Regardless, our Redlegs finish the simulated season nine games over .500 and 3.5 games above the Pirates in the Central.

The Guy: Nicknamed “Easy,” Don Money does not have an easy name for SEO. Research foibles on my end aside, Money had a long, productive Major League career, playing for 16 seasons and making four All-Star teams. Money was known as a glove-first third baseman, leading the league in fielding percentage for the hot corner between 1972 and 1974. Since retiring, Money has coached at pretty much every level of minor league baseball, all in the Brewers system. For three years, he was the team’s AAA coach with the Nashville Sounds before taking a player development role with the organization.

Before presenting the full final statlines for the simulated season, I wanted to see how our fake Reds did compared to their 2020 projections. A simulation isn’t worth anything if it isn’t true to life after all. 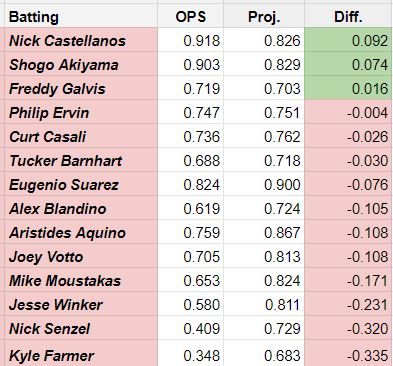 On the batting side of things, most of the Reds actually did much worse than they were projected to. Only three Reds outperformed their projections, two of them our standout stars Nick Castellanos and Shogo Akiyama. Neither Eugenio Suarez nor Aristides Aquino had the power that the projections expected, but no one in this decades-spanning universe had much power. Joey Votto didn’t reach base at the clip we’re accustomed to because frankly few players through history have reached base as consistently as Votto. And as I have noted many, many times before: Mike Moustakas, Jesse Winker, and Nick Senzel all had absolutely horrible seasons. (Derek Dietrich was not included in Baseball Prospectus’ pre-season Reds projections.) 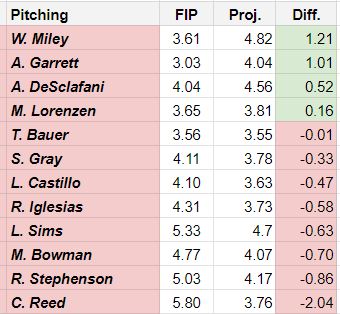 As for the pitchers, it doesn’t get much better. Wade Miley and Amir Garrett overperformed by quite a bit, though Miley’s stellar season was more a product of low expectations than anything. Trevor Bauer pretty much hit his projection proving that the only time you can predict what Trevor Bauer is going to do is by completely randomizing his actions. The rest of the starters were all within a half point of their projected FIPs, on the plus side for DeSclafani and down side for Sonny Gray and Luis Castillo. Lastly, the long relievers in the bullpen collectively got rocked, with Cody Reed finally proving that maybe he just doesn’t have what it takes to stick in the bigs. (Pedro Strop was not included in FanGraphs ZiPS projections for FIP.)

And that about wraps it up. Joey Votto had more steals than home runs, Tucker Barnhart hit four triples in half a season, and Shogo Akiyama promises to be the best Reds centerfielder since Drew Stubbs (not a high bar, but still). It’s been a delightful ride that I hope you all have enjoyed as much as I have. See you July 23. 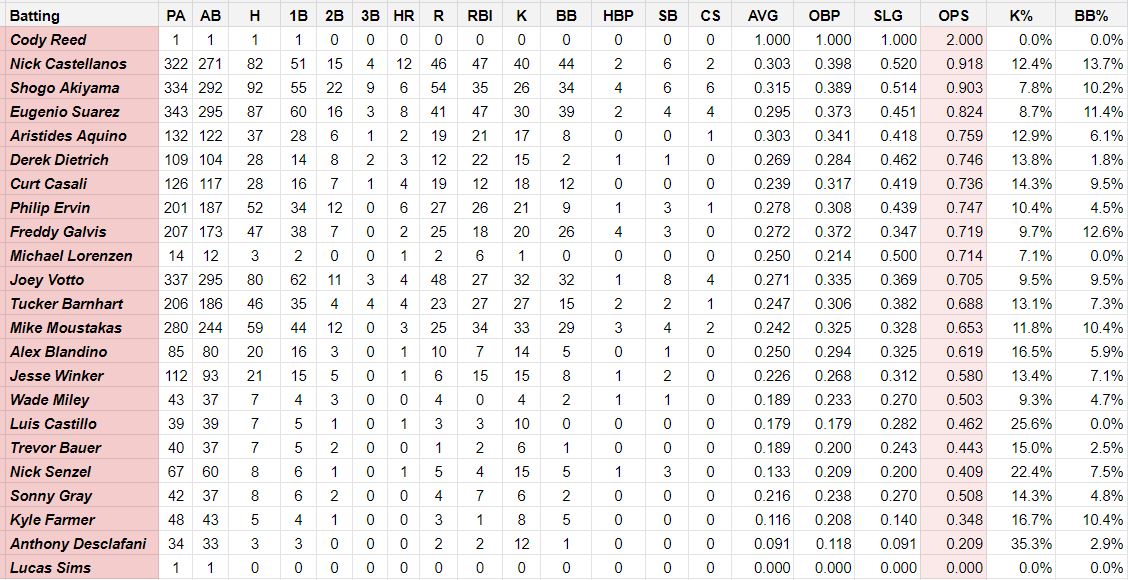