Luis Castillo pitched a one-hit complete-game shutout to lead the Cincinnati Reds (42-42) to a convincing 13-0 victory over the Washington Nationals (50-34) at Great American Ball Park.

Castillo retired the first nine Washington batters he faced, but Trea Turner led off the top of the fourth inning with a single, which turned out to be the visitors’ only hit. Castillo walked two and struck out 11 in what was the best pitching performance by a sim Reds pitcher all season.

On offense, Nick Castellanos was the shining star. He batted 3-for-5 with two home runs (his sixth and seventh) and knocked in five runs in what was his best single-game offensive performance of the season.

Things went so well for the sim Reds that Alfredo Rodriguez made his major league debut, pinch-hitting for Freddy Galvis in the bottom of the eighth inning, and he got his first sim major league hit and first RBI.

After today’s sim games, the Brewers maintained their one-percentage-point lead in the division over the Cubs. St. Louis lost and fell one game behind. The Reds are three games behind the co-leaders and in fourth place. 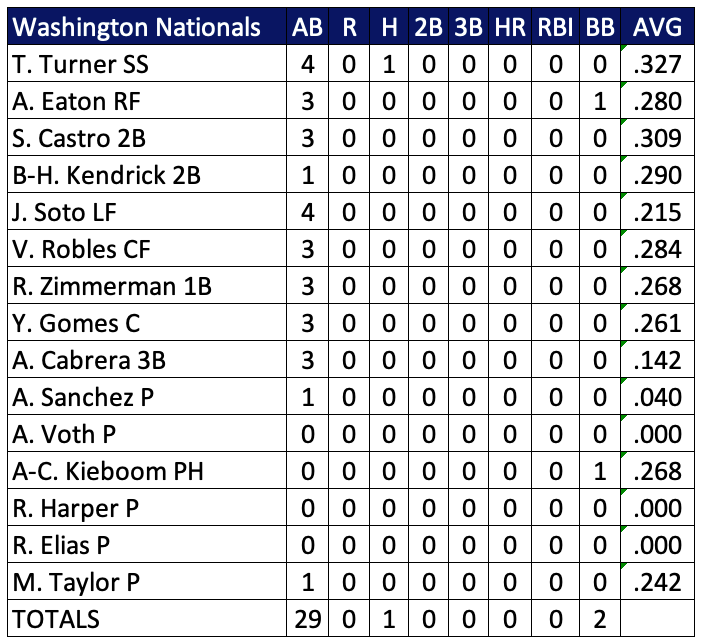 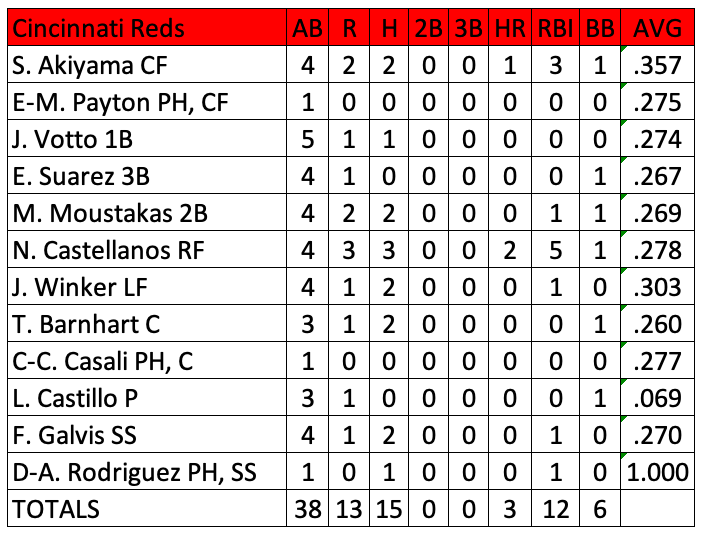 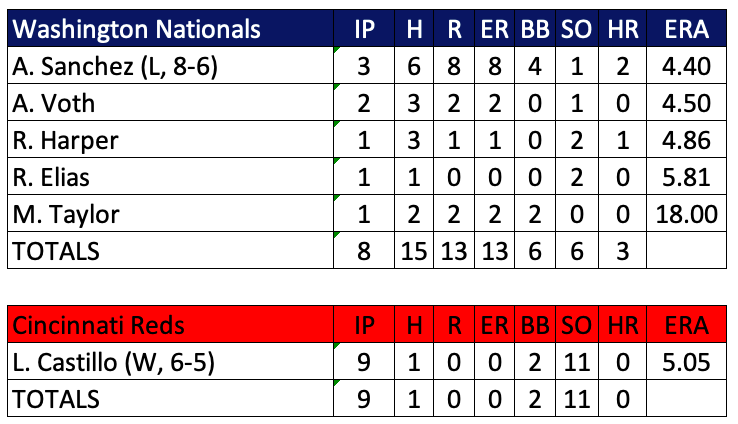 The 2020 schedule has the Reds hitting the road for Los Angeles for a four-game series against the Dodgers Monday. Trevor Bauer pitches for the sim Reds, and lefthander Clayton Kershaw — the sim league leader in wins with 11 — pitches for LA.

The Cincinnati Reds, along with all other MLB teams, must submit their 60-man player pool roster to MLB by 4pm ET today. It’s likely that we will find out that roster today. We wrote a little bit about it this morning, speculating about some things and who may wind up on it. Once it’s released, we’ll have a full report.

Will the short season have legitimacy?

Mo Egger, a local sports radio talk show host in Cincinnati who fills in at times for ESPN Radio at the national level, also contributes at The Athletic with more of a “fan perspective”. On Friday he wrote about the 2020 baseball season and how legitimate it could be.

If the Reds can avoid a repeat of last season’s dreadful start and emerge from a chaotic and unpredictable regular season with a playoff berth, then somehow survive the most arbitrary postseason in pro sports and capture the franchise’s first world championship in 30 years, I will celebrate by whatever means are socially acceptable. That could be mauling total strangers in ecstasy or quietly enjoying a cigar finer than the one I tweeted a picture of the other night.

I would bask in what would be an immensely cathartic moment for our city and I’d buy every souvenir shirt, hoodie, hat and trinket available.

Texas Rangers staff is “terrified for their safety”

Jeff Passan of ESPN wrote about what’s happening in Texas right now, particularly with the Rangers and their staff at the new ballpark. Multiple employees have tested positive for COVID-19. The Rangers, of course play in Texas, and they have been attempting to plan around allowing fans back into their ballpark as allowed by their governor. That’s led to many ballpark employees being asked to work at the stadium rather than remotely, like is happening in many other places who are not planning around fans just yet.

Jon Davis has the priority for Sunday’s lineup since he was the winning manager today. Have fun with this! If you have any questions, please post them in the comment string below. Here are the “managerial records” of our Redleg Nation participants to date: