A season! A real season! Given everything going on, it doesn’t feel like a complete victory to have baseball back, but it does give something to look forward to. Also, with real baseball coming back, I’m going to end these simulations next week at game 81. It just seems fitting. 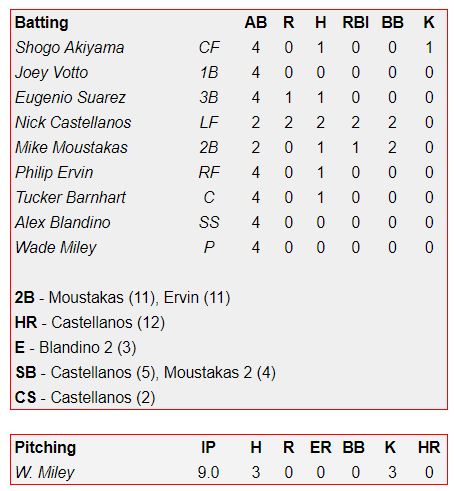 The Game (3-0 win): Wade Miley threw a complete game shutout and Nick Castellanos provided most of the Reds offense to widen the team’s lead in the NL Central to three games. Castellanos reached base in each of his plate appearances, raising his OPS to a team-leading .934 (excluding Cody Reed). After a slow start to the season, the Reds marquee free agent signing has really turned things around, a turn of events that has only made me miss real baseball even more.

The Guy: Before there was the “Maddux” — throwing a complete game in under 100 pitches — there should have been the Red Barrett, doing so in less than 60. In August of 1944, Barrett, then with the Braves, threw a complete game with only 58 pitches, averaging just two pitches per batter. He only gave up two singles the whole game, striking out none and walking none. In other baseball trivia, Barrett also twice came within one out of a perfect game, though neither mishap came in the ninth inning. Once, against the Cubs, Barrett faced the minimum but gave up a third inning single, with the runner then caught stealing. The second time, nine months later against the Phillies, Barrett lasted until the eighth before giving up a single, the only baserunner of the game. 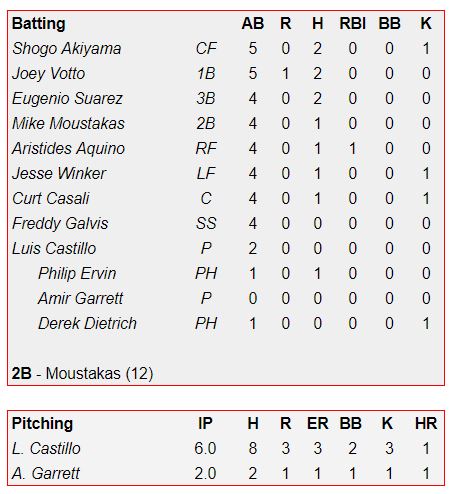 The Game (4-1 loss): The Reds grabbed an early lead in the top of the first as Aristides Aquino’s two-out single brought home Joey Votto, but that was about it for the day. Luis Castillo immediately gave the run back in the bottom of the frame, and the Cardinals took the lead for good with a home run in the third. Amir Garrett allowed another run in relief, making it two straight outings that he’s given up a run after 14 without to begin the season.

The Guy: Juan Bonilla made it six seasons in the major leagues, only accumulating 2.4 WAR though he did finish fourth in the 1981 Rookie of the Year voting. On its face, that’s the most interesting fact of Bonilla’s career. But if this South Florida Sun Sentinel story is to be believed, Bonilla was also blackballed from baseball for a year because of rumors of drug use. By his own admission, Bonilla dabbled in drugs and did attend a month-long rehab facility during his time with the Padres, but his black balling came over a year after all of that. According to the story, Bonilla has no idea why no team would sign him, with no conviction to his name it just didn’t make sense. After a year away, the judge who married Bonilla put in a good word with George Steinbrenner, and suddenly the second baseman was a Yankee. Weird sport, baseball. 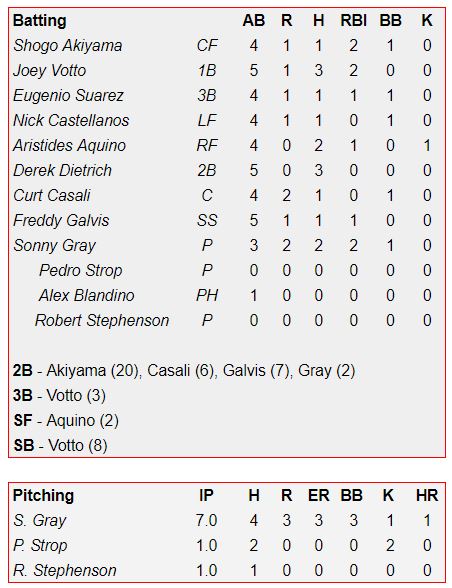 The Game (9-3 win): Sonny Gray did a bit of everything today, scoring the Reds first run, the tying run, the go-ahead run, and doubling home two insurance runs late in the game. He even pitched too! Every Reds starter got a hit in this game, with Joey Votto, Derek Dietrich, and Gary each reaching base thrice. Votto also stole his eighth base of the season and extended his lead over Shogo Akiyama for the team crown.

The Guy: Much like Mark Langston in the trade that netted the Mariners Randy Johnson, Jake Westbrook was the marquee name in a trade between the Cardinals and Indians he ultimately won’t be remember in. At the 2010 deadline, the Cardinals brought in Jake Westbrook from Cleveland, sending Ryan Ludwick to San Diego, and the Padres sending a young Double-A pitcher named Corey Kluber to Ohio. I’m sure you know how that worked out. At the time, Westbrook was a productive veteran with an All-Star nod to his name. To be honest, the trade worked out for both him and the Cards, as the Redbirds won the World Series the next season. As for the Padres, I’m sure they’d rather a do-over. 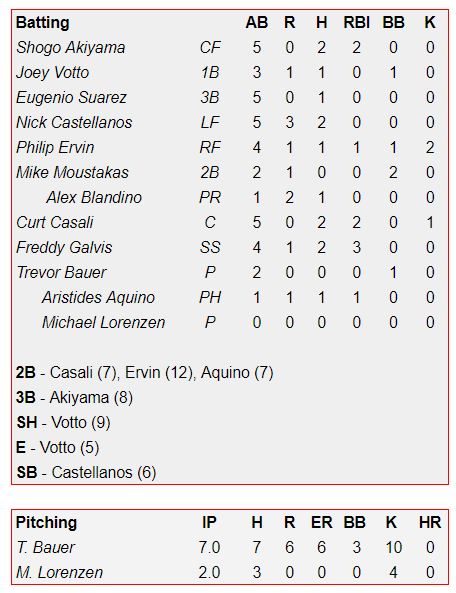 The Game (10-6 win): Trevor Bauer got knocked around in the fourth inning, putting the Reds in an early hole, but a late inning offensive surge put the Reds through with the series win. Bauer’s 10 strikeouts were a season high for a Reds starter despite the seemingly 30 million complete games that have been thrown. Freddy Galvis, Aristides Aquino, and Shogo Akiyama provided the offense that put the Reds ahead with a near cycle, going single, double, triple before a Votto lineout broke the streak.

The Guy: Nicknamed “Laga Beer,” Mike Laga was a first round pick of the Detroit Tigers in 1980, though he never lived up to that pedigree as evidence by his career -1.0 WAR. The Tigers took Laga out of Bergen Community College, a pick that was a bit of a surprise for Laga who remembered, “It wasn’t until that actual phone call came from Bill Lajoie that I realized, ‘Wow, this could be kind of neat, getting paid to play baseball.” Laga never actually got an extended shot to prove himself at the major league level. Across nine seasons, he played in a career-high 41 games in 1988, often losing out on more playing time due to competition, injuries, or poor performance. Laga’s career ended in 1990 when the Braves tried to assign him to a Mexican League team and he refused. While the case went through litigation, Laga decided to retire and go back to school.

The Game (3-1 win): Walk-off home run Philip Ervin! Another close game for the Reds ends with a massive home run to deep right field by the Reds right fielder. Anthony DeSclafani kept the Reds in the game for nine innings, throwing another complete game and earning the win. Also, Shogo Akiyama is closing in on 100 hits for the season, with nearly half of those hits going for extra bases. Quite the pickup for the Reds.

The Guy: For a player with 34.0 WAR to his name, Ken McMullen never did much to stand out. He had one season with an average above .270, one season with more than 20 home runs, and one season where he garnered some down-ballot MVP votes, finishing 26th. None of these were the same season. Known for his good glove, McMullen blossomed after a trade to the cellar-dwelling Washington Nationals, though blossom may be too strong a word. Of his six seasons with the Senators, McMullen recorded 4+ WAR four times, a productive, dependable player. But productive and dependable players didn’t necessarily get paid, and as late as his ninth season in the bigs, McMullen was working as a gas station attendant in the offseason. 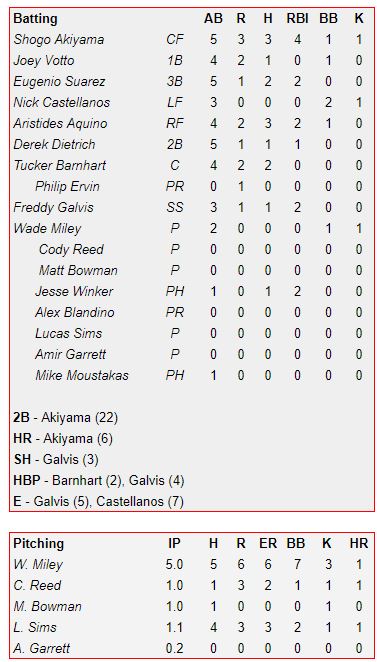 The Game (13-12 win): Another walkoff win for the Redlegs! This time, Shogo Akiyama played the hero, launching a two-run homer to deep left field and erasing a one-run deficit for the Reds. Wade Miley had a horrible start, giving up six runs and walking seven in five innings, but the bullpen kind of, sort of limited the damage, with the exceptions of Cody Reed and Lucas Sims. Shogo added two other hits besides his game winner, and Aristides Aquino also notched a three-hit game.

The Guy: Bobby del Greco was the youngest of 10 children in a working-class Pittsburgh family. He quit high school after his sophomore year to help support the family, but his sandlot exploits impressed Pittsburgh Pirates scout Pie Traynor so much that the NL club signed him at 16 years old for a bonus of $600. Del Greco made his big league debut in 1952 at just 19 years old, going 3-4 with a walk and triple. “Boy, I’m the happiest guy in Pittsburgh tonight,” he said after the game. “I just hope I can play a lot of baseball and make some money for my mother — I’m going to build a new house for her, you can bet on that!” It never quite worked out for del Greco.

He earned the reputation of a good defensive outfielder with no bat and bounced around the major league clubs as a result. “I’ve never played in 15 straight games in the majors, never,” he said in 1958 after the Yankees went with an aging Enos Slaughter over him. “They say I can’t hit. You get that sort of reputation and it follows you. No matter what you do in the minor leagues.” Del Greco finally got his shot with the Kansas City A’s, starting for two and half years though his career ended soon after that. After retirement, del Greco drove a delivery truck for the Pittsburgh Post-Gazette and passed away last October.

With nearly half a season in the rearview, the Reds offseason additions are still leading the team. Nick Castellanos and Shogo Akiyama both have OPS’s above .900, and Mike Moustakas has crawled out of his early season hole. And Wade Miley has done about all we’ve expected him too. With real baseball around the corner, let’s hope those four produce in real life too. 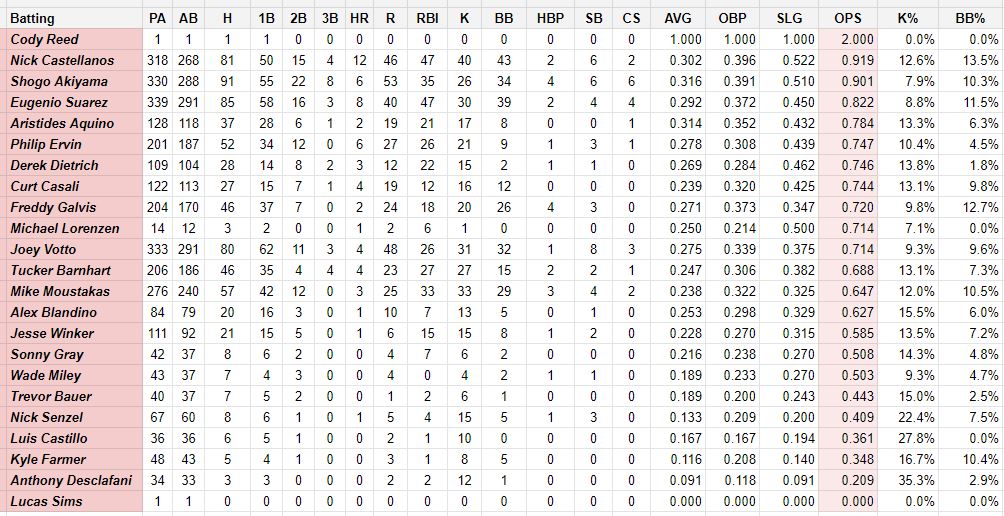