Trevor Bauer’s first start following 15 days on the injured list was very good, but not good enough as the Chicago Cubs (42-38) were able to defeat the Cincinnati Reds (39-41) by a 2-1 score at Great American Ball Park.

Bauer allowed both Cubs runs in five and one-third innings of pitching, and was picked up very well by his bullpen mates, who held the visitors scoreless for the rest of the game. Chicago struck first in the fourth on a leadoff double by Anthony Rizzo and a RBI single by Jose Baez. Despite walking two other batters in the inning, Bauer escaped further trouble. In the fifth, Albert Almora Jr. launched a solo home run for the Cubs’ second and final run.

Offensively, it was a game of missed opportunities for the sim Reds. Cubs starter and winner Yu Darvish walked the first two Reds hitters in the second, but a Nick Castellanos double-play grounder short-circuited that would-be rally. In the fourth, Jesse Winker walked to lead off and moved to second on a wild pitch. Mike Moustakas delivered with a two-out hit, but Winker was thrown out at the plate trying to score.

The eighth and ninth innings were the killers, though, for the home team. Trailing 2-0, Shogo Akiyama led off the bottom of the eighth with his second single, and Winker followed with the same. The resurgent Joey Votto doubled to score Akiyama and move Winker to third, meaning the sim Reds had runners on second and third with nobody out, trailing by one run. But Cubs reliever Rowan Wick bowed his back, striking out Eugenio Suarez, grounding out Moustakas with no advance of the runners, and striking out Castellanos.

In the bottom of the ninth, Cubs closer Craig Kimbrel walked the first two batters, Freddy Galvis and Tucker Barnhart. Pinch-hitter Derek Dietrich grounded into a forceout, moving Galvis to third. Michael Lorenzen, representing the winning run, was brought in to pinch-run for Dietrich at first. But Kimbrel struck out both Akiyama and Winker to end the game.

Shogo Aikyama’s first-inning single off Darvish extended his hitting streak to 29 games, but he was immediately picked off by Darvish. 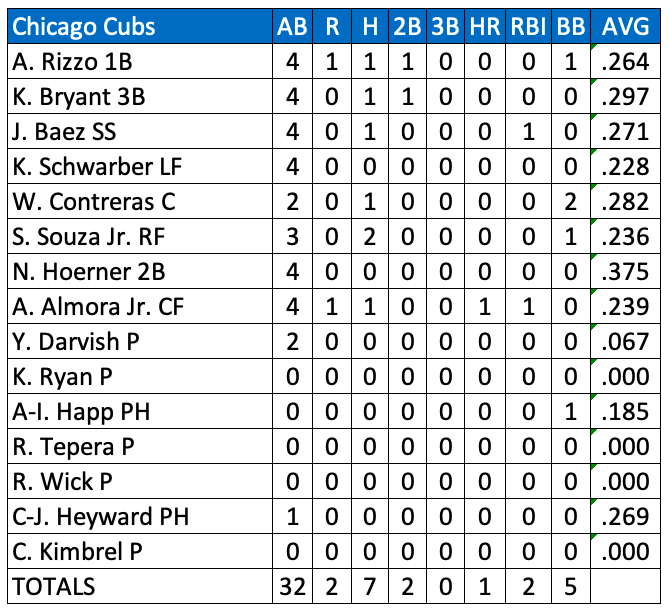 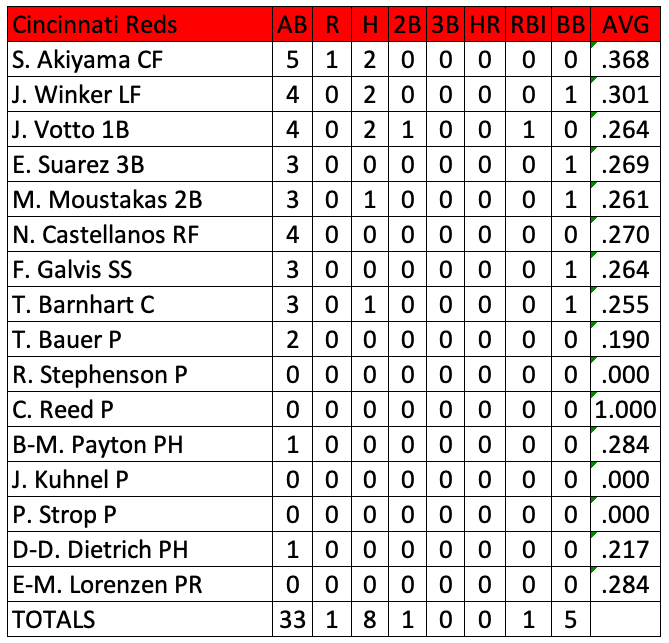 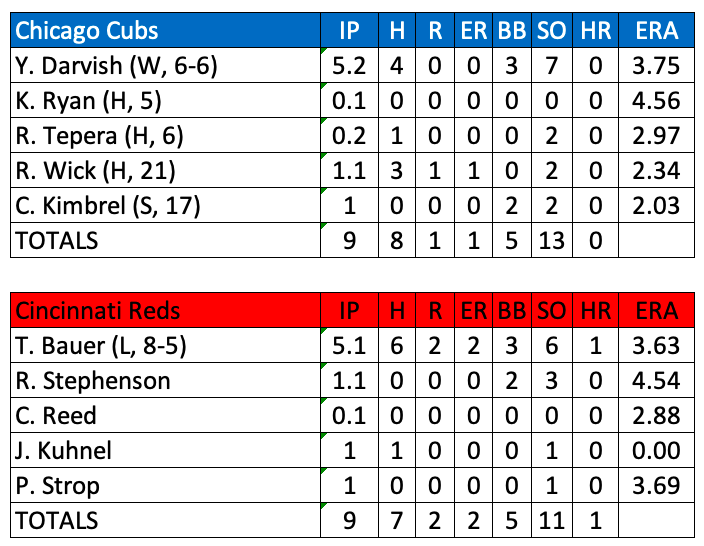 The 2020 schedule has the Reds hosting the Cubs again Thursday. Whoever is Thursday’s commenter/manager will choose from Sonny Gray and Anthony DeSclafani as the starting pitcher. Both Reds starters have at least four days rest since their last start. Right-hander Kyle Hendricks will pitch for Chicago.

The crew at Baseball America has updated their Top 100 Prospect List to include draft picks from the 2020 draft, as well as rearranging some of the previously rated players. Cincinnati has three players that are on the new list, but Doug Gray has a big question about why one of the players is ranked where he is over at RedsMinorLeagues.com.

The Reds find their “second facility” for 2020

Earlier today we wrote about this, but just in case you missed it – the Cincinnati Reds have found their second site for spring training 2.0, as well as the place where the taxi squad will practice once the regular season starts.

Reds find their practice facility for the taxi squad in 2020

Wild and crazy stats that could happen in 60 games

Over at ESPN they had a panel of MLB writers speculate on some of the crazy stats and stories we could see in a 60-game season. The estimates on most wins were in the 40-43 range, though it was noted that in 2017 the Dodgers had a stretch where they went 43-7 over a 50-game stretch, so things could get pretty crazy. There was even a fun Reds-related note in here:

That dude was really good at baseball. Anyways, it’s a fun read – go check it out.