With MLB and the MLBPA seemingly on the verge of an agreement to bring baseball back into our lives, these simulations might not be long for this website. But let’s enjoy them while we still can, shall we? 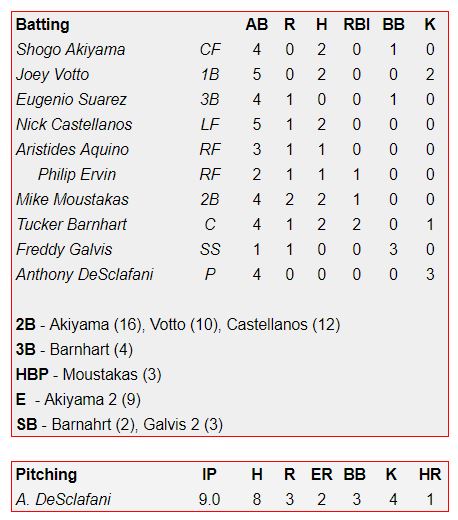 The Game (8-3 win): Another big win for the Redlegs as Anthony DeSclafani throws a complete game, and I really regret not tracking complete games from the beginning of this experiment. Mike Moustakas’ turnaround also continues apace, with another two-hit day, and Tucker Barnhart hit his fourth triple of the year, officially cementing 2020 as his season with the most triples. If he hits three more, he’ll surpass his career total, which really seems likely at this point.

The Guy: Fresco Thompson’s real first name was Lafayette, which really makes you wonder just how many Lafayette’s were running around in the 1920s to require Fresco to go by his middle name. The answer? Just one: Fresco’s dad, Lafayette Fresco Thompson Sr. When Junior got his first call up to the majors in 1925, he lasted just the season’s final month, with the Pittsburgh paper lamenting, “Lafayette Fresco Thompson, with all of his names, was shipped to Buffalo today.”

Thompson only found regular playing time when he was traded to the bottom-feeding Phils, and as team captain, he once handed the ump a lineup card that read: “P: Willoughby and others.” When asked why he was making a travesty of the game, Thompson replied: “I’m not, but our pitchers are.” Across nine years in the bigs, Thompson played in fewer than 700 games, accumulating just 0.1 WAR, but he became baseball royalty after retiring for his role in the Dodgers player development. Under Thompson’s watch, the Dodgers produced five Rookies of the Year and three future Hall of Famers (most notably, Sandy Koufax). Thompson was eventually named General Manager of the Dodgers in 1968 but died of cancer in November of that same year. 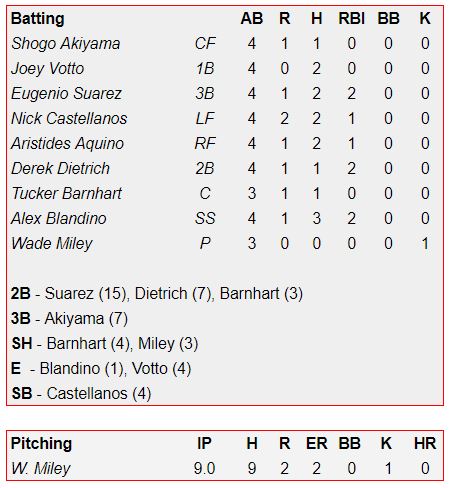 The Game (8-2 win): While slightly a stretch, this might be the first game in this series where the teams in the random box score are the same as those on the schedule. Not only do we have the Reds as the Reds, but we have the Boston Braves (later the Milwaukee Braves) as the Brewers. It’s not perfect, but it’s close enough for me. Oh, and the Reds won. Wade Miley threw a complete game (what else is new), and five Reds had multi-hit games.

The Guy: Back in the day, the Reds signed Ivey Wingo for a lot of money, about $6,500 dollars, to keep him from the Federal League. But when that league went under a year later, the Reds no longer wanted to be burdened by Wingo’s contract. The Cincinnati fans were having none of it though and formed a petition to keep Wingo in the Queen City. Surprisingly, it worked. Wingo would go on to play on the 1919 World Championship winning team, serving as somewhat of a player-coach through his final season in 1926. 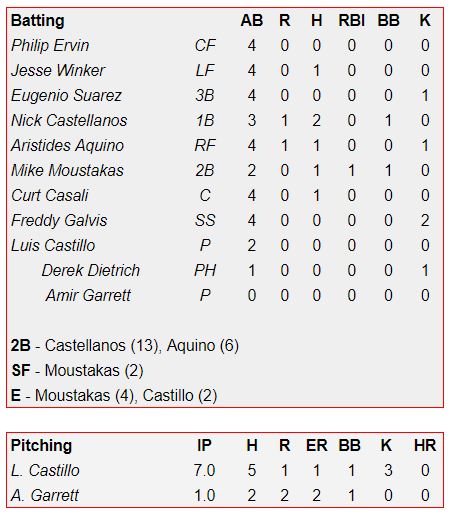 The Game (3-2 loss): The Reds almost rallied for another win in this game, but Amir Garrett’s first runs allowed this season proved the difference. Down 1-0 heading into the bottom of the eighth, Garrett got two quick groundouts before a double, an intentional walk, and a triple plated two. Garrett got another groundout after the triple, but the damage was done. A walk, a double, a wild pitch, and a sacrifice fly brought home two for the Reds, but it was too little, too late.

The Guy: In 1948 with the Boston Braves, Jeff Heath finished a feat that had never been done before: He hit a home run in every National League ballpark, becoming the first player to do so in both leagues, and doing it in back-to-back years to boot. At multiple points in Heath’s career, he held out during the season for a better contract, often to the annoyance of his teammates. During one such holdout, Hal Trosky asked him, “Heath, why don’t you stop fooling, sign your contract, and get down to work like the rest of us?” Nonplussed, Heath replied, “Trosky, if you could hit like I can hit, you’d hold out all summer.” Heath retired with a .293/.370/.509 slashline and accumulated 37.6 WAR, so he could, indeed, “hit.” 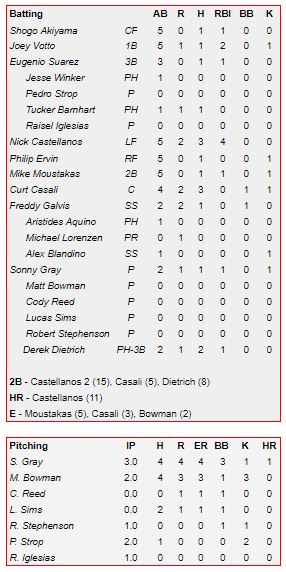 The Game (11-9 win): Chaos, pure chaos. In this game, the Reds used seven pitchers, four pinch hitters, and had Michael Lorenzen pinch run because the bench was empty. At one point in the bottom of the sixth, the Reds had a 1% chance of winning this game. Down by five entering the seventh, the Reds put up four, then another one in the eighth, then two more in the ninth to take the lead. You just cannot predict baseball.

The Guy: Through his first seven seasons, Orlando Cepeda hit more home runs than Hank Aaron believe it or not. And even though Cepeda last another decade in the bigs, knee injuries relegated the rest of his career to what could have been. He hit 30+ home runs only once more after those first seven years, though he did win an MVP with St. Louis after he was traded to the Cardinals. The change of scenery did Cepeda a world of good, as he finally found a manager that he got along with in Red Schoendienst. But after that MVP season, Cepeda’s production fell off the map. Both of his knees gave out a couple years later, and if it weren’t for a trial run of the designated hitter in the American League, his career would have ended. As it were, Cepeda won the inaugural Designated Hitter of the Year Award in 1973. Despite all of the promise of his first seven years, Cepeda finished his career with 379 home runs, just over half of Hank Aaron’s total. He still managed to make the Hall of Fame though. 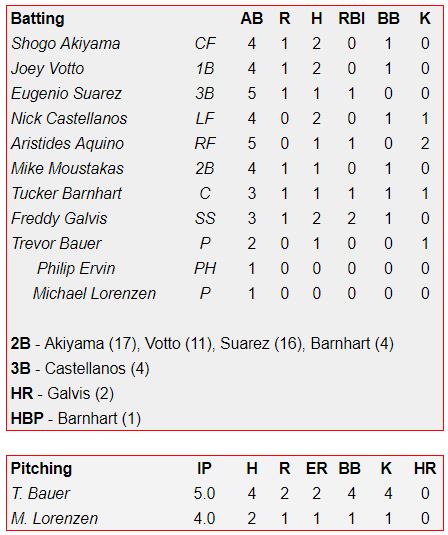 The Game (6-3 win): Two batters in and the Reds had control of this game. A leadoff double and a single from Votto, put the Reds on the board first, but Trevor Bauer gave the run back in the second. But another double, this one from Eugenio Suarez, reclaimed the Reds lead in the third and put the team ahead for good. A triple from Nick Castellanos in the fifth pushed his OPS over .900 once again, and Freddy Galvis hit his second home run of the year.

The Guy: Baseball-Reference lists five nicknames for Dick Stuart, each progressively weirder than the last. We start with Stu, which is normal; then Dr. Strangeglove, which sure the movie came out around then; but next we have the Boston Strangler, which certainly raises some questions. That’s not the end though: we also have Stonefingers, which seems like a new take on klutz, and The Man with the Iron Glove, which … harsh. And if you go to his SABR bio (which shout out SABR bios for providing so much of the background for this project), the lede says, “Dick Stuart was fun—as long as you didn’t have to be on the field with him.” Stuart led the American League in errors seven times, nearly tripling the second-place finishers number in 1963.

Stuart, of course, had to do something well, and that something was hitting the life out of the baseball. He only hit 228 home runs during his career, but by all accounts, he hit them FAR. When he played at Class A Lincoln, Stuart hit 66 home runs in a season, but struck out more times than he had hits and committed 30 errors. When he wasn’t called up, Stuart started signing his autographs “Dick Stuart 66.” 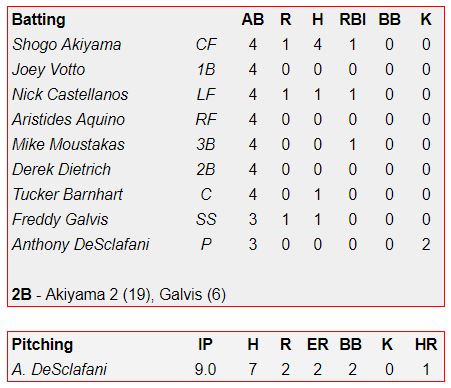 The Game (3-2 win): Despite being a team sport, sometimes you only need one player to win a game and that’s what Shogo Akiyama did today. The Reds leadoff hitter went 4-4 with a pair of doubles, a run, and an RBI to lead the Reds to victory. Anthony DeSclafani did his part on the mound, only allowing one run on a solo homer. DeSclafani has had a strange season, leading the Reds starters in innings pitched, ERA, and strikeouts, but giving up more than twice the number of home runs as the next Reds pitcher. As long as it works.

The Guy: Woody Williams had a short baseball career, only lasting four seasons in the bigs, the last three of which came with the Reds. He had an extended cup of coffee with the Brooklyn Dodgers in 1938, playing in 20 games, before disappearing from the majors for five years. The Reds claimed him off waivers in 1940 but didn’t bring him up to the big league team until 1943. The team gave the 30-year-old second baseman 30 games to prove himself that season before installing him as their everyday starter for the next two years. He was only worth 3.4 WAR those two seasons, but he did lead the majors in at-bats in 1944, hitting .240/.290/.289. Williams had more success in the minors, hitting .399 in his first professional season playing for the Leaksville-Draper-Spray Triplets.

After another successful week, the Reds have started to pull away from the Pirates. Nick Castellanos, Shogo Akiyama, and Eugenio Suarez have been leading the charge on the offensive end, with Luis Castillo and Anthony DeSclafani anchoring the rotation. 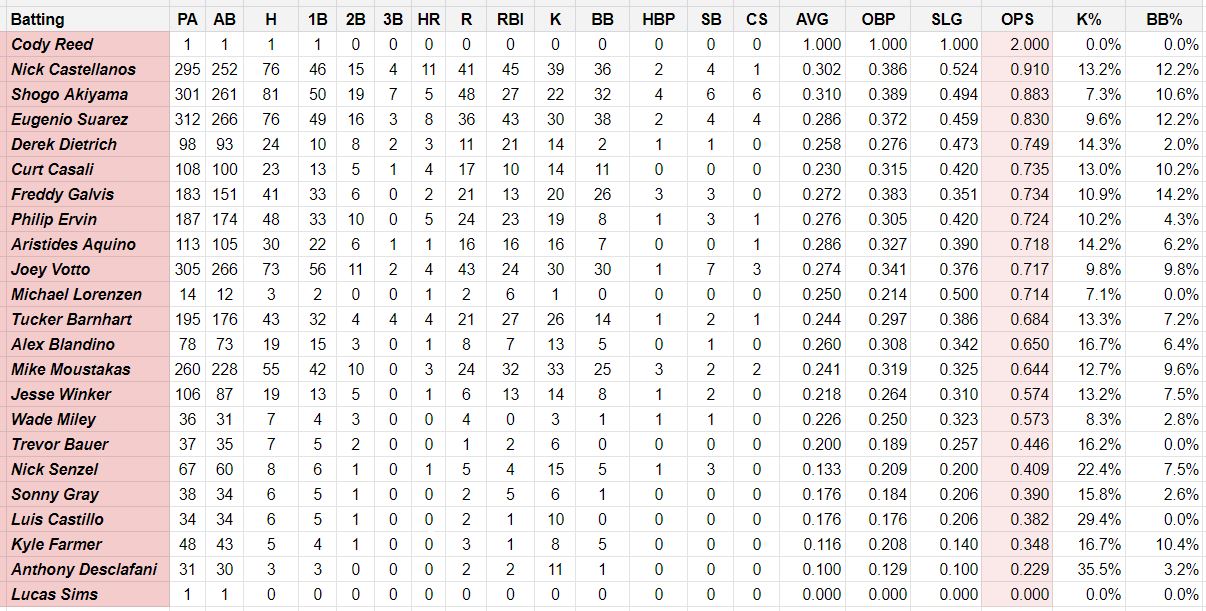