Javier Baez was nearly a one-man wrecking crew for the Chicago Cubs (35-30) in their 9-5 victory over the Cincinnati Reds (31-33) at Great American Ball Park.

Baez hit a two-run double in a four-run Cubs fifth inning, and then slammed a three-run home run against Raisel Iglesias in the top of the ninth to give the visitors a four-run cushion.

The Cubs’ four-run fifth was aided by Eugenio Suarez’s team-leading 12th fielding error, leading to three of the four runs in the inning being unearned. It was one of three key turning points in the game.

Chicago had a 6-1 lead after four and a half innings, but the sim Reds fought back. Freddy Galvis hit a solo home run in the bottom of the fifth to make it 6-2, and Tucker Barnhart and Shogo Akiyama followed with walks. Jesse Winker belted a double, scoring Barnhart, but Akiyama was thrown out at the plate trying to make it a 6-4 game. That was key play number two, because had Akiyama been safe, Winker would have been standing at second with Suarez coming to the plate.

In the bottom of the sixth, Suarez led off with a walk, and the red-hot Mike Moustakas launched his 12th home run to make the score 6-5.

Baez’s three-run, two-out blast in the ninth off Iglesias was key turning point number three. Cincinnati put two runners on in the bottom of the ninth, but Craig Kimbrel struck out Winker to end it.

Winker with three hits, and Akiyama and Galvis with two each led the Cincinnati offense. After another shaky Luis Castillo outing, the sim Reds bullpen shut down Chicago until Baez’s ninth-inning blast.

The defeat was the Reds’ third straight. 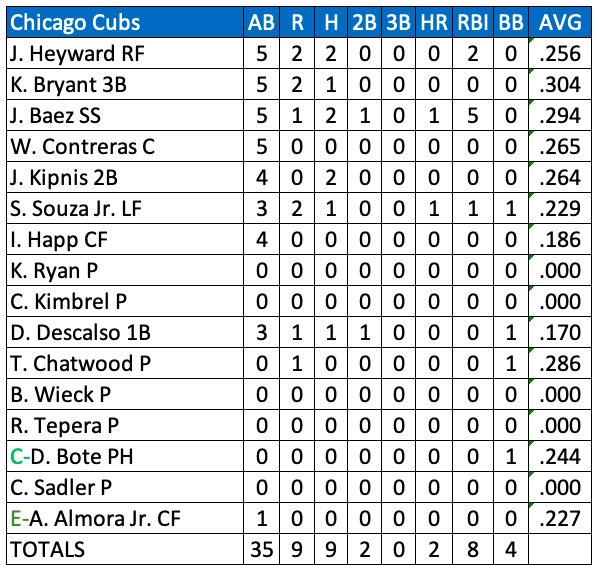 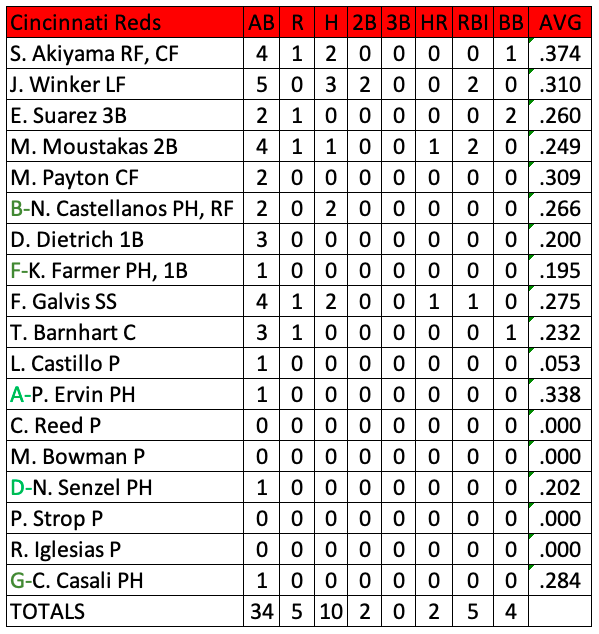 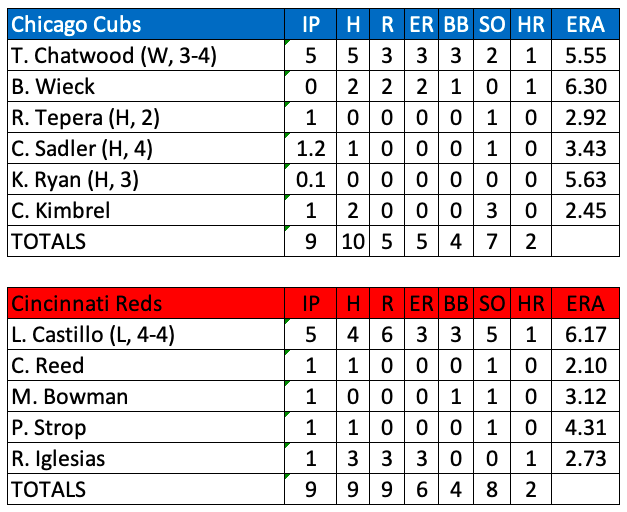 Division-leading St. Louis fell to Pittsburgh, meaning that the Reds remain six games back from the division leaders.

The 2020 schedule as currently constituted has the Reds on Saturday hosting game three of the four-game set with Chicago, with Sonny Gray pitching for the Reds, and right-hander Yu Darvish pitching for the Cubs.

How much money do MLB Players actually make?

Over at FiveThirtyEight today, Travis Sawchik looked into just how much money a baseball player makes. With the phrase “billionaires vs millionaires” being thrown around a lot, it’s worth looking at. The Major League Baseball Players Association doesn’t represent just the players on the active 25-man roster. It represents all players on the 40-man roster.

Of the 1,453 players to accrue at least one day of service time last season, 590 (40.6 percent) have made less than $1 million in career earnings, according to the MLBPA’s breakdown. The median career earnings of that group was $357,718.

And as noted later on in the article – that is before taxes or fees (to agents, clubhouse dues, union dues). Of course, the rest of us pay taxes, too – so it’s not entirely fair to bring up that as if it’s something others don’t also have the burden of paying. Still, if you’re going to cite “millionaire”, it’s worth acknowledging how much one is actually bringing in. There are certainly plenty of millionaires among the players. But there’s a very large portion of players in the players association who make less money than people you are probably friends with each year.

MLB announcers will not travel for road games

Baseball certainly isn’t the first sport to do this, as we’ve seen it happen over the last few years for other sports – particularly college sports for non-high profile teams and events – but games will be broadcasted remotely for road teams, who will use a video feed while calling the games. This goes for both television and radio announcers according to Bruce Levin of 670 The Score.

All MLB announcers( TV and radio) have been told they will be doing all 2020 road games from a local broadcast studio or home ballpark with monitors as their guide.

While there are some things that will certainly be more difficult – observations that can be made at the ballpark in real time that if the camera guy can’t see/isn’t seeing won’t be, by-and-large, the difference in what you are used to hearing and what you will hear, won’t change much. Announcers will adjust, and likely do so very quickly. They’re professionals. 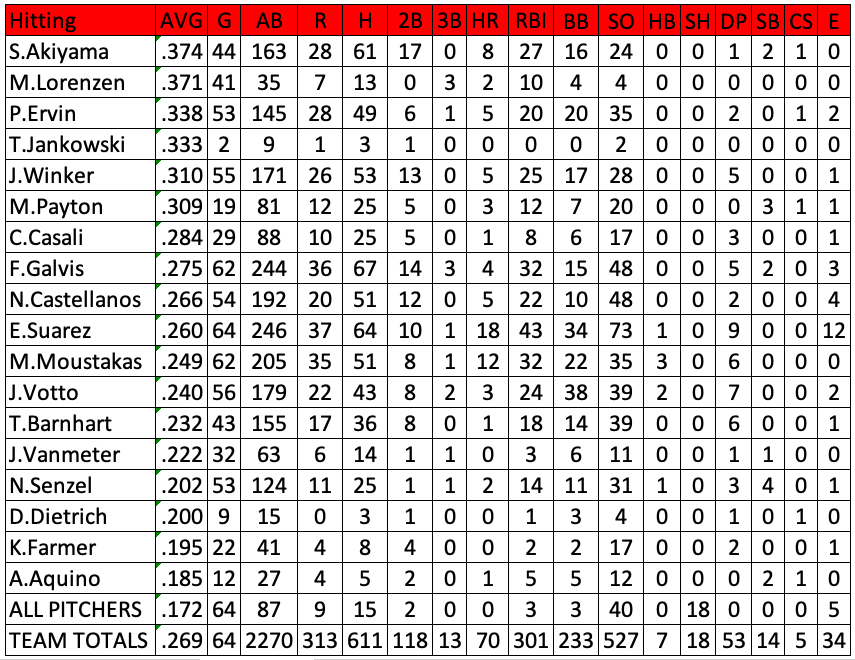 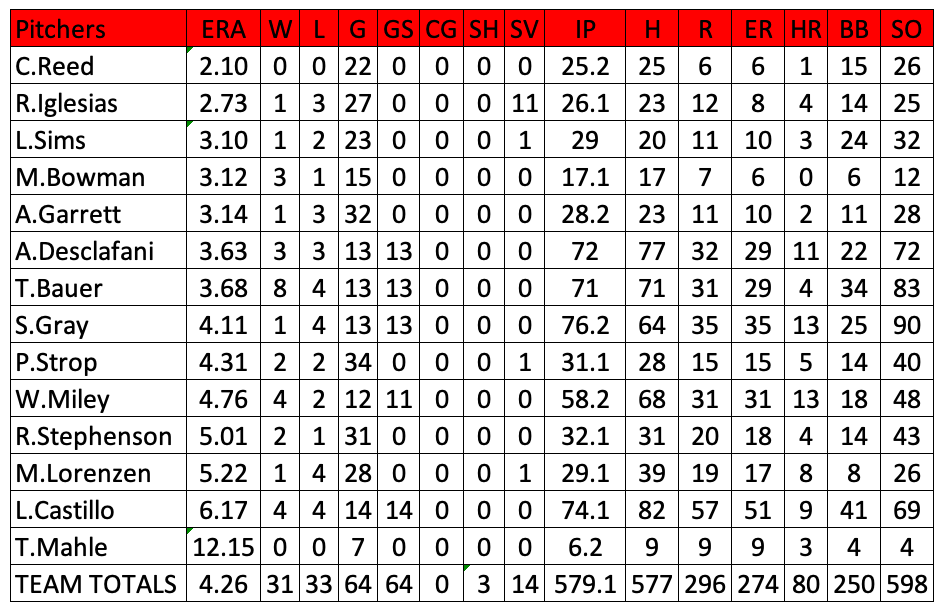