Momentum swung sharply and quickly during the seventh inning of the Chicago Cubs’ (33-28) 7-4 victory over the Cincinnati Reds (30-30) at Wrigley Field.

After five and a half innings, the Cubs held a 1-0 lead on Kris Bryant’s fourth-inning home run — the first of four Chicago long balls in the game. In the bottom of the sixth, Willson Contreras went deep off Sonny Gray following a Bryant walk to give the Cubs a 3-0 lead.

The sim Reds made a stirring rally in the top of the seventh. After a Mark Payton single and Michael Lorenzen walk against Yu Darvish, Eugenio Suarez singled home Payton. Then Mike Moustakas launched one over the ivy-covered brick wall at the friendly confines off reliever Brad Wieck to give his team a 4-3 lead.

Cincinnati had a shot in the top of the ninth. Lorenzen and Moustakas both singled off Cubs closer Craig Kimbrel, and with two outs, Redleg Nation commenter/manager Gonzo Reds pulled out his secret weapon, Phillip Ervin, to pinch-hit for Tucker Barnhart. Unfortunately, Ervin grounded out to shortstop Jose Baez to end the game, resulting the Reds dropping three of four at Wrigleyville.

Some bad news on the injury front: Joey Votto was hit by a Darvish pitch in the first inning, and had to be removed in favor of Derek Dietrich. Votto will miss the next eight games and will be placed on the 10-day injured list. Redleg Nation commenters will have the choice of bringing up a player for Tuesday’s game, and then sending that player or someone else down Wednesday when Shogo Akiyama will be activated from the injured list. Or, no player recall for Tuesday would mean that Akiyama will take Votto’s place on the roster Wednesday. 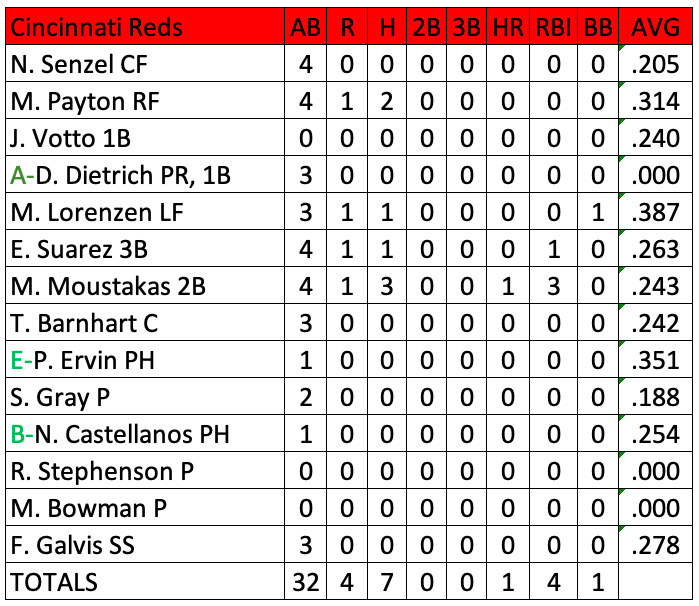 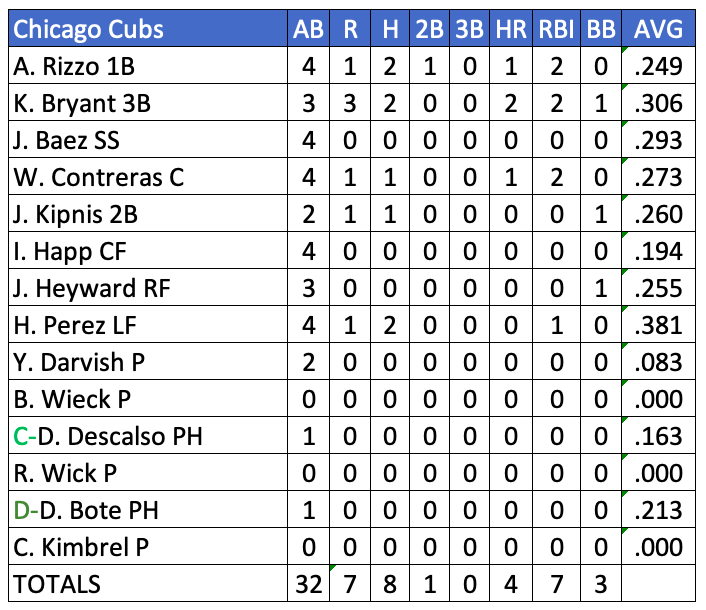 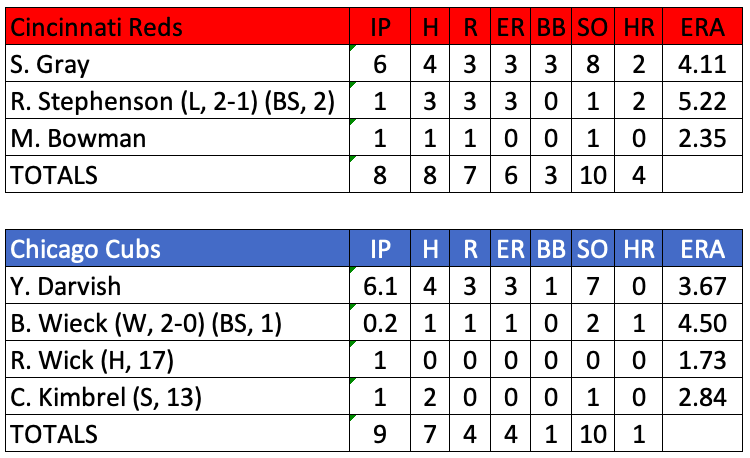 Division-leading St. Louis defeated Toronto, so the Reds fell four and a half games off the first-place pace.

The 2020 schedule as currently constituted has the Reds moving on to Pittsburgh Tuesday for the first game of a brief two-game series against the Pirates at PNC Park. Trevor Bauer will pitch for the sim Reds, while right-hander Joe Musgrove pitches for the Bucs. If the Reds could sweep two from Pittsburgh, it would even out the road trip record at 3-3.

Major League Baseball isn’t acting like other sports right now. It seems that the NHL, NBA, NASCAR, and even the NFL are just moving on just fine with plans to get back onto whatever surface they participate on, while MLB can’t seem to get much of anything moving forward. Bradford Doolittle of ESPN wrote this morning about why that is.  He broke it down into several factors:

It’s an incredibly thorough read and I’d suggest you check it out if you want a lot more details about why baseball is so far behind the other sports when it comes to getting things together. Most of it revolves around the fact that except for the NFL, the other sports have nearly completed a full regular season and have made plenty of revenue already because of it. But there are a lot of little things beyond that, too.

A seemingly insurmountable gap is likely closer than it appears

That’s the teaser for Craig Edwards piece today over at Fangraphs. Earlier today we wrote about the players proposal to the owners on Sunday with both the health and monetary issues they attempted to address. Edwards breaks down why he believes that the two sides are actually closer than they may appear – while also disputing again the owners claims that they’d actually lose money on games without fans, instead showing evidence they’d MAKE money on those games. 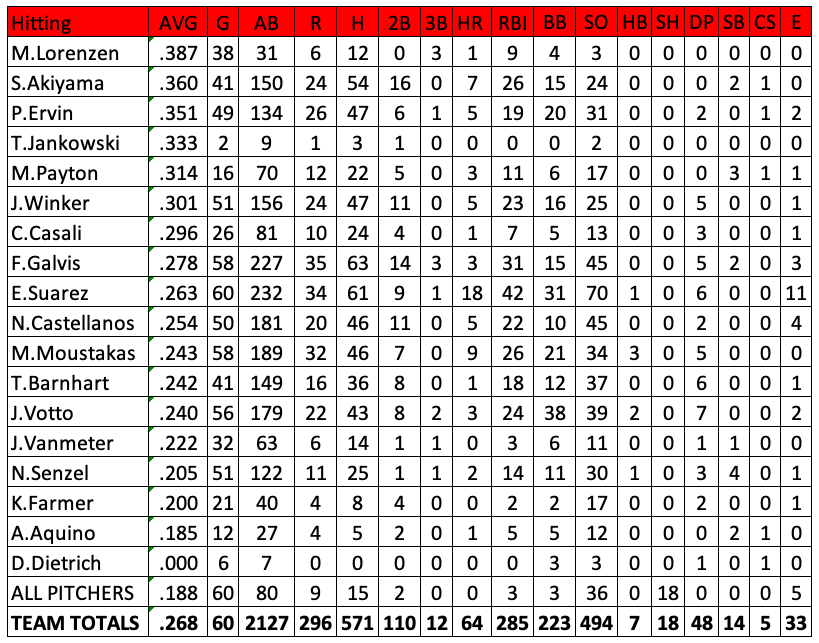 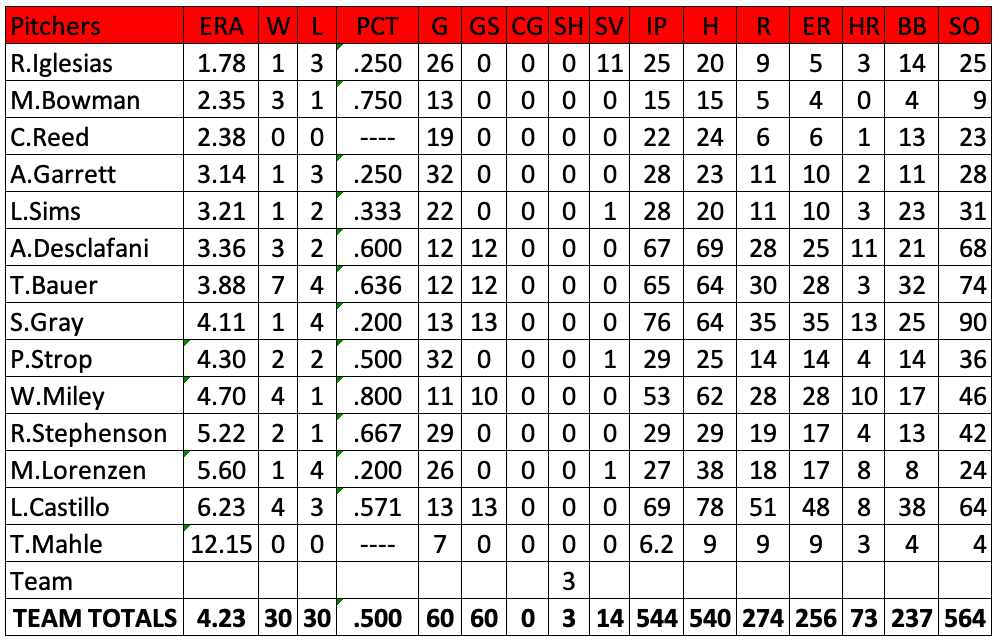