Daniel Descalso’s leadoff home run in the bottom of the ninth inning off Michael Lorenzen broke a 3-3 tie and gave the Chicago Cubs (31-27) a 4-3 win over the Cincinnati Reds (29-28) at Wrigley Field.

The sim Reds led 3-1 after three innings on a two-run homer by Mark Payton and a solo shot by red-hot Eugenio Suarez, his 18th, but failed to score thereafter. Starter Anthony DeSclafani was excellent again, striking out nine and walking none over five innings of work. (Along with lowering his ERA to 3.36, DeSclafani went 2-for-2 at the plate to raise his batting average to .313.) For the game, Reds pitchers struck out 14 Cubs batters and walked only one. But the Cubs tied the game in the bottom of the seventh off Robert Stephenson before Descalso’s ninth-inning heroics.

Cincinnati had an opportunity to take the lead in the top of the ninth off Cubs reliever Brad Wieck. Mike Moustakas led off with a single, and one out later Nick Senzel’s pinch-hit single put two on with one out. But Payton struck out and Jesse Winker grounded out to end the inning. 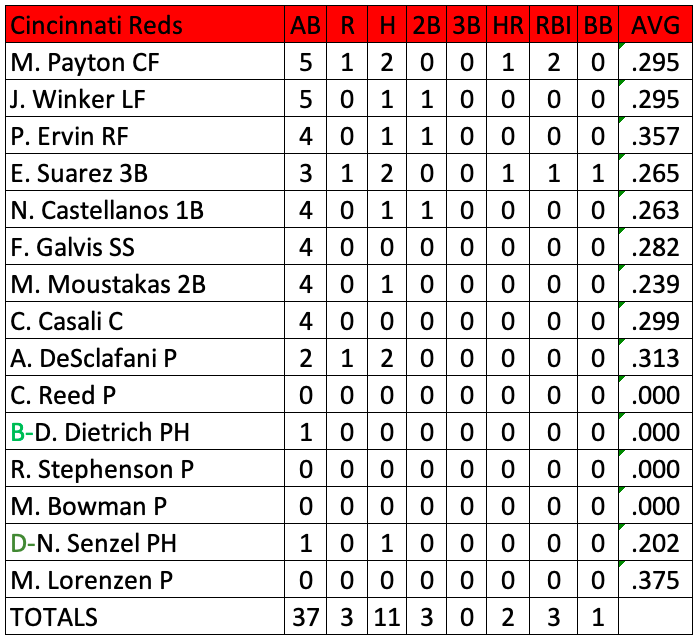 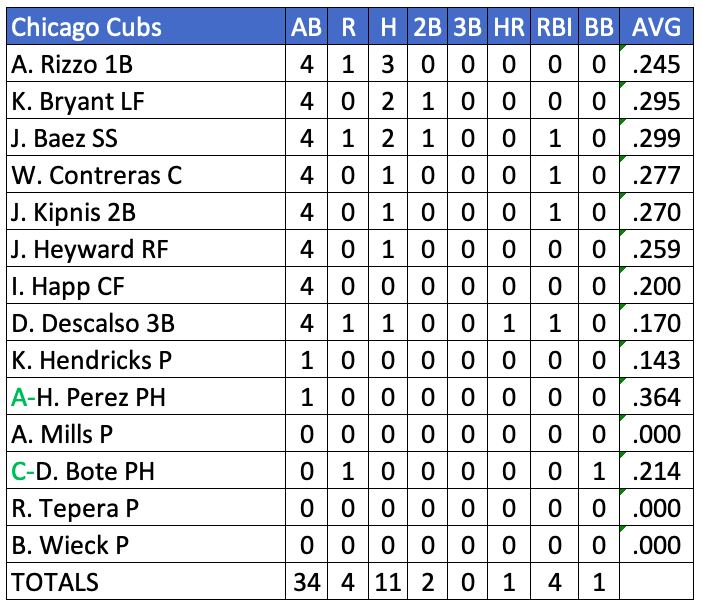 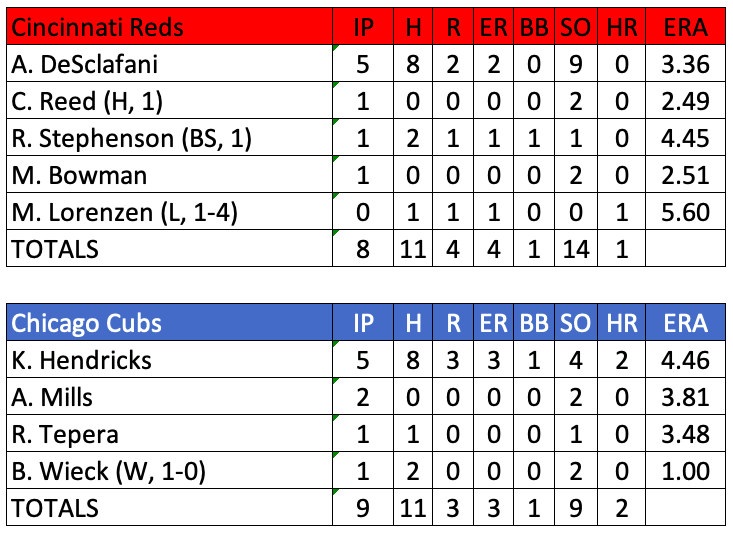 Standings following the May 29 games:

Division-leading St. Louis continued its hot streak with a win against Pittsburgh, and the Cubs kept pace. Milwaukee was off, so they lost a half-game to both teams in the standings. Cincinnati fell to three and a half games off the pace.

The 2020 schedule as currently constituted has the Reds back in Chicago Saturday for the second game of the four-game series against the Cubs at Wrigley Field. Wade Miley will pitch for the sim Reds, while lefthander Jose Quintana pitches for the Cubs.

Nick Senzel is looking for ways to help out minor leaguers

Outfielder Nick Senzel reached out on instagram to his fellow big leaguers to try and get something figured out to help the minor leaguers who are being released en masse right now around baseball. Several players have chipped in to help out there organizations, with David Price being the most recent one – reportedly paying each Dodgers minor leaguer $1,000 for the month of June in order to help them. At the end of March Adam Wainwright and his wife donated $250,000 to help out St. Louis Cardinals minor leaguers.

MLB Draft to be shown on both MLB Network and ESPN

The Major League Baseball draft is going to be a lot different this year than those in the past. Instead of 40 rounds, there are only going to be five. In a normal draft year, MLB Network has hosted the 1st and 2nd rounds of the draft on day 1, but rounds 3-10, and 11-40 that took place the following two days were only available online at MLB.com.

With a shortened draft, and nothing else to put on television, ESPN and MLB Network will both broadcast the draft over two days. The first round will take place on June 10th. On June 11th they will both also broadcast rounds 2-5 beginning at 5pm. The two broadcasts will be produced by their own networks, providing different coverage at each.