After gathering some momentum with a 5-1 week, the Reds look to dust-ups with the Padres and the NL Central-leading Pirates. With another good week, the Reds can climb into series contention in the division and hopefully sit atop the standing by the time real baseball comes back. 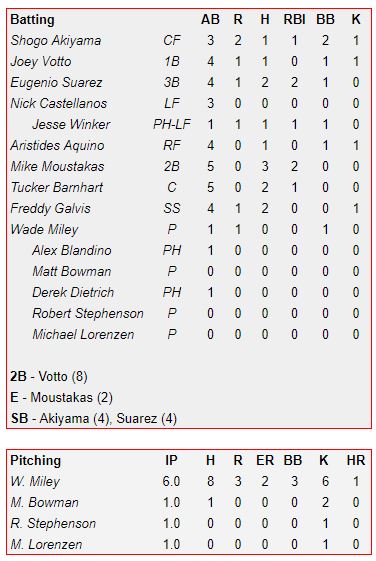 The Game (7-3 win): In the Reds’ 50th game of the season, the winning ways continue with a come-from-behind win over the Padres. Wade Miley doesn’t pitch well necessarily, but he limits the damage to just three runs on eight hits and three walks. At the plate, everyone chips in except for Nick Castellanos who’s lifted in the bottom of the seventh with runners on the corners. It’s a curious decision from David Bell, but it ultimately pays off as Jesse Winker walks to load the bases. The Reds score two more in the inning and take the lead for good. Mike Moustakas finally breaks out of his funk with a 3-5 day, putting some distance between himself and the Mendoza line.

The Guy: In 1983, Lou Pinella had a rather unique opportunity: He got to present his cousin, Dave Magadan, the Golden Spikes Award, given to the best amateur baseball player in the country. At the time, Magadan was a spray-hitting first baseman for the University of Alabama, not a profile you saw lauded often. But Magadan hit .535 with a .829 slugging percentage for a Crimson Tide team that finished runner-up in the College World Series. The Mets drafted the junior that summer, and after winning the Golden Spikes Award in November, Magadan remarked: “I’d like to move up one league a year. But if I don’t I can live without it.” And then Magadan did just that, spending three years in the minors, moving up a level each year, and making the majors as a third baseman with almost no power. For his career, Magadan only hit 42 home runs but stuck around the majors for 16 years as a contact-first corner bat. 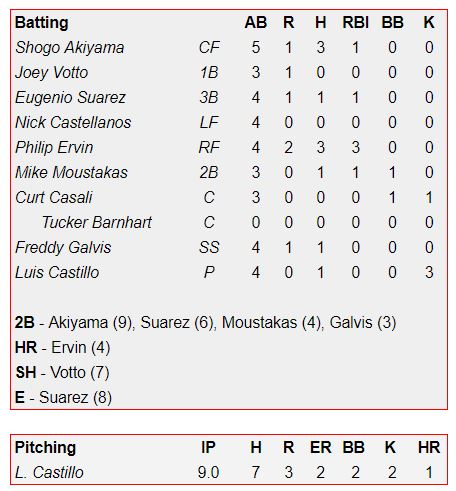 The Game (6-3 win): A real Reds game! Always exciting to have one of these generated and even better: it’s a win! Luis Castillo turns in a gem of a complete game, limiting the Padres to just three runs on seven hits. La Piedra has struggled with walks this season and his strikeout rate has plummeted, but he’s limiting hard contact and most importantly not allowing runs. Philip Ervin gets a start in right now that Aristides Aquino has cooled off a bit and promptly picks up the slack. The righty went 3-4 at the plate and clubbed his fourth home run of the season, driving in three.

The Guy: Everyone remembers when the Mariners Lenny Randle blew a bunt foul, right? Well believe it or not, Randle was about 40 years behind the times as Bert Haas had done the exact same thing (and succeeded!) in 1940. Playing third base in an International League game, Haas came charging in on a Woody Jensen bunt only to hit the deck and get puffing. Haas did indeed blow the ball foul and because there was no written rule against the practice, Jensen was ordered back to the plate. League president Frank Shaughnessy immediately banned the practice, but at least it worked once.

Haas ended up playing nine seasons in the bigs, four of which were with the Reds, two before World War II and two after. Haas served in the Army during the war years, fighting in Italy. He was named to an All-Star team his final year with the Reds, easily the best of his career, in which he hit .286/.346/.369. Those numbers wouldn’t get him an All-Star nod today, but also no current All-Stars have ever blown a ball foul. 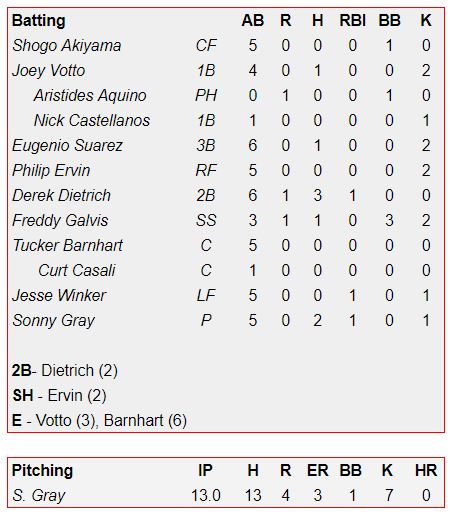 The Game (4-3 loss): Another Reds game though this one is less cause for celebration: The fictional Reds fall because the real Reds rallied in extras, snapping the fictional Reds seven-game winning streak. In an attempt to match his rotation mate’s Opening Day effort, Sonny Gray pitches the full 13 innings for a complete game loss. Despite the bonus innings, this game lasts a crisp 2 hours and 51 minutes, with both teams largely flailing at the plate. Derek Dietrich and Freddy Galvis try to carry the offense, hitting a combined 4-9 with three walks but it amounts to pretty much nothing.

The Guy: Hugh Mulcahy never amounted to much as a baseball player, earning the nickname “Losing Pitcher” after leading the National League in losses in both 1938 and 1940. Mulcahy actually never had a season where he won more games than he lost, but despite that distinction, he was named to the National League All-Star team in 1940. (Yes, the same season he led the league in losses. Surprisingly, Mulcahy isn’t the only pitcher to accomplish that feat, as both Eddie Smith in 1942 and Steve Rogers in 1974 did the same.)

Perhaps Mulcahy’s lack of success on the mound led him to become the first major leaguer to enlist during World War II, signing up nine months before Pearl Harbor. Losses aside, Mulcahy had promise and his enlistment went down as one of the greatest “what if’s” in baseball history. “Chances are there has not been in modern times another ballplayer with ability comparable with Mulcahy’s who put so much into baseball and took so little out, that is, no one who wasn’t at least partly at fault, no one at once so deserving and unlucky,” wrote sports journalist Red Smith in 1947. “In a strictly professional sense, Mulcahy is the major war casu­alty among big-league players.” 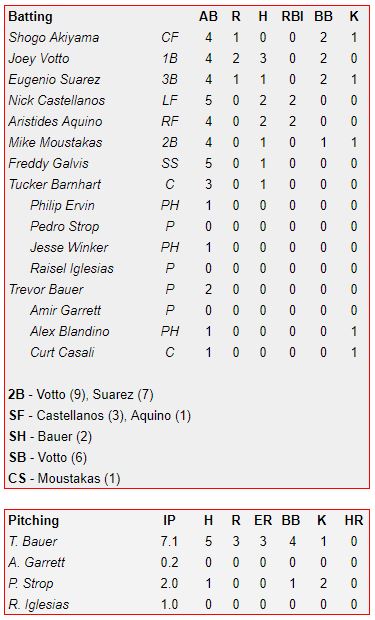 The Game (4-3 win): Back-to-back extra inning games for the Redlegs, although this one ends as a 4-3 win. Joey Votto was the star of the show today, going 3-4 with two walks and stealing his team-leading SIXTH base. Fictional baseball is great. Trevor Bauer pitched well, going into the eight inning and only allowing three runs, but he lacked his usual control. Despite not pitching in nearly a week, both Pedro Strop and Raisel Igelsias acquitted themselves nicely out of the bullpen and Amir Garrett still has not allowed a run in 2020.

The Guy: Jose Lind came up through the Pirates’ system as a slick-fielding middle infielder with no-pop in his bat. Despite that, he strung together enough hits at the plate his first two seasons to accumulate 5.6 WAR before his bat really fell off the cart. Lind won a Gold Glove in 1992, but for the rest of his career, he was worth -1.7 WAR, only performing above replacement level in two of his final seven seasons.

Lind was known as a bit of a prankster in the Pirates clubhouse, sometimes brandishing knives to scare his teammates, and more famously the 1991 Upper Deck card where he hurdled a teammate. But the backhalf of his career descended into something much darker. He got into drugs and spent a year in jail after he fled the scene of an accident, drunk and with drugs on his person. Since then, he’s cleaned up his act, even managing an independent team for a time. 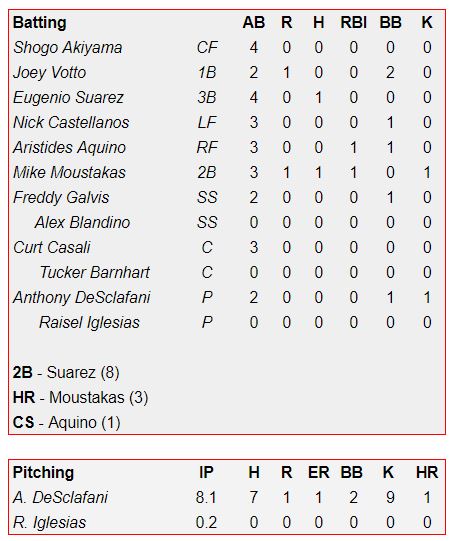 The Game (2-1 win): The Reds take the first of a three-game set against the NL Central-leading Pirates, pulling to only 3 games back in the division. The win also brings the Reds back to .500 for the first time in three weeks. Anthony DeSclafani continues his relevatory season, going 8.1 innings here and nearly going the distance, but a leadoff home run for the Pirates to start the ninth followed by a strikeout and two singles sent him to the showers. The Reds closer Raisel Iglesias then came in for the second-straight day and induced a double play to end the game on a 1-2 pitch. As for the offense, Shogo Akiyama is fully slumping, hitting .205/.326/.308 in his last 10 games.

The Guy: There are few universally known stories that I get joy from re-telling, but the ballad of Mark Langston is absolutely one of them. Mark Langston: Ace pitcher of the fledgling Seattle Mariners, winner of 70 games his first five seasons, lead the league in strikeouts three times over the same span. Entering his sixth season, Langston had no desire to resign with the Mariners and the notoriously frugal franchise was determined to flip him. After months of rumors and at least one Mets veto of a six-player deal, the Mariners unloaded their ace. “The trading of Langston was no surprise,” the New York Times wrote, “but his being exchanged for three untested pitchers was.” Care to guess who one of those untested pitchers was? That’s right, the Big Unit himself, Randy Johnson. Langston acquitted himself nicely for the Expos before moving to the then-California Angels, but he would never measure up to perhaps one of the best pitchers of all-time. If only the Reds could get an inner circle Hall of Famer for their rentals.

Wednesday, May 27: Reds vs. Pirates 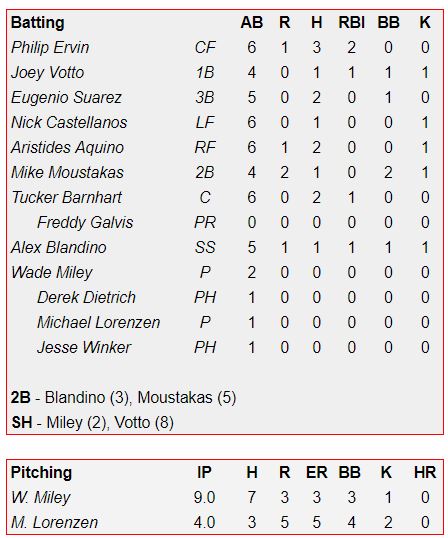 The Game (8-5 loss): The Reds third extra-inning game this week ends in defeat as Michael Lorenzen gets rocked in his fourth inning of relief work. To be fair, the Reds probably should have never reached extras in this game, but a three-run rally sparked by a Bryan Reynolds error in the bottom of the ninth tied the score. For the next four innings, the Reds bats went cold again, waiting until the Pirates had built a five-run lead in the 13th to manage any sort of life but it was too little, too late. Not even bring Babe Ruth, er Derek Dietrich, off the bench could save the Reds.

The Guy: Samuel Byrd’s nickname by birth was “Sammy,” but by baseball, it was always “Babe Ruth’s Legs.” Byrd’s prime baseball years were spent backing up the legendary Murderer’s Row and he earned his nickname because of how frequently he was subbed into games to pinch run for Ruth. The height of Byrd’s baseball career came with the Reds at the end of his career in 1936 when he hit the first pinch hit ultimate grand slam in major league history. What’s an ultimate grand slam, you ask? Well, that’s when a batter clubs a grand slam in the bottom of the ninth with his team down by three. The climatic scene of every baseball movie ever in other words.

After he retired from baseball, Byrd decided to go pro in another sport: golf. Considered the best golfer in the major leagues while he played baseball, Byrd soon proved that that wasn’t empty praise. He won 23 pro golf tournaments during his 12-year golf career, including two top five finishes at the Master’s. He is still the only person to play in both a World Series and a Master’s, much less win one and nearly win the other.

Despite his slump, Shogo Akiyama is back atop the offensive leaderboard as Nick Castellanos settles into a small slump as well. Joey Votto is finally starting to walk a bit, and Mike Moustakas’ bat has come to life with three extra-base hits this week.